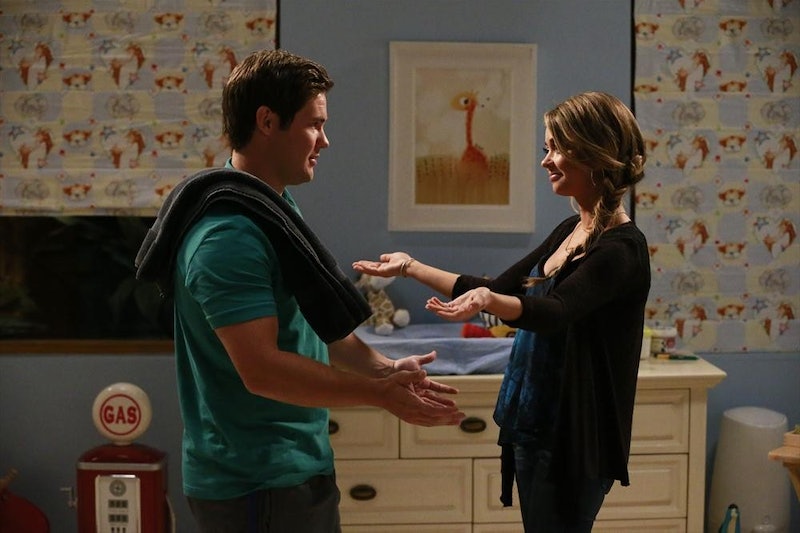 Modern Family did it, you guys! — well, kind of. In the Oct. 8 episode of Modern Family , Haley kissed Andy. And the show proved again how well they can give us unexpected plot points by turning the tables on the heartbreaker that is Haley Dunphy (played to perfection by Sarah Hyland). Instead of Andy the nanny just being another guy that Haley is concerned about crushing his little heart, he revealed that he's the kind of guy that actually crushes girls (unintentionally). And considering how nonchalant he was after Haley kissed him, and how taken aback she was, I think Andy may turn out to be a good change of pace for the constantly admired Haley.

Now it may be unrealistic that Haley is around her baby half-uncle so much, but as a person who lived at home for almost four years (four years, people!) after college, I'm cool with Haley still living at home. And I was concerned at the beginning of Season 6 when we learned that her fashion blog was uber successful. But I shouldn't have been too worried, since it turned out that she had been leaving her webcam on at all times and that's why she had so many followers. Of course, I don't want the Dunphys to be failures, but I appreciate that they don't always succeed in what they do (like when Claire lost the council election) because that's how real life is. Seeing these characters fail and have faults makes me love them more and helps to ground the show.

One thing that Haley has always succeeded in was having guys adore her. But you don't learn how to be in a real, adult relationship if you're constantly idolized and that's why it's so amazing that Andy is not going to be like the other guys Haley dated (who were basically stalkers).

Although the Andy character is clearly a good guy, I still have absolutely zero attraction to Adam Devine. (I also had no attraction toward Dylan, so Haley and I must just have very different types.) But what's so good about Andy is that he's outrageously similar to Haley's father Phil — endearingly nerdy, well-meaning, and good with kids.

As much as Haley and Claire butt heads, they may be destined to have the same kind of romantic relationship. Claire was a party girl in her youth too, who dated people like Robbie (portrayed with excellent sleaziness by Matt Dillon in Season 2). Claire has always been hard on Haley, and part of that is probably because Claire can see a bit of herself in the way Haley behaves (the other part is that Claire is a complete control freak). So, the fact that Haley could potentially end up with a man who is so much like her cringe-inducing father is fabulous. (I mean how much did you cringe when Andy said "bum scrubbing" to baby Joe immediately after telling Haley how he was like a drug to women?)

This definitely won't be the last we see of Haley and Andy (even ABC called the above video "Haley and Andy's first kiss" — emphasis on "first"). But earlier in Season 6, Phil wisely told Haley that your 20s are for taking chances and making mistakes. Although Andy doesn't necessarily seem like a mistake, if he rejects her, I can't imagine Haley will take it well. And she may go back to her old ways to try to make him jealous, which will only lead to more hilarity.