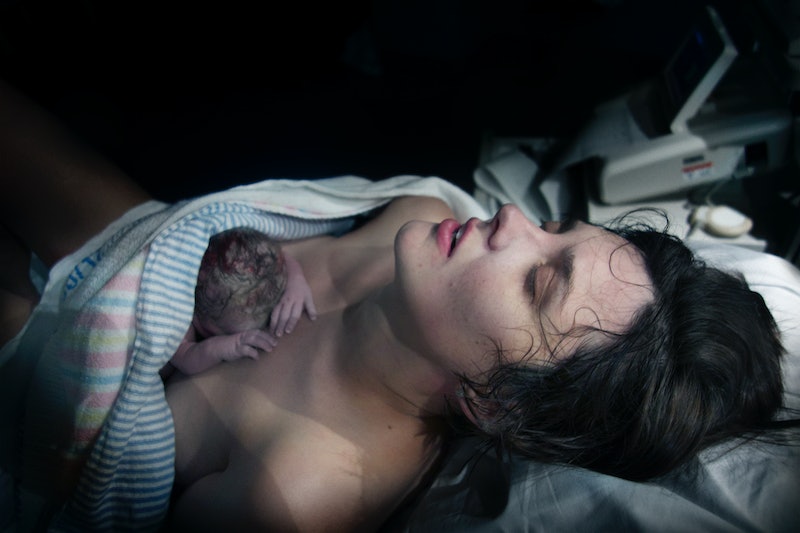 Facebook isn't exactly known for its feminist credentials. In 2012, leaked internal guidelines revealed that while images of crushed legs were allowed on Facebook, those of exposed nipples were not. It took a bevy of campaigners, protesting under the #freethenipple hashtag, to get Facebook to allow breastfeeding pics. But now, it turns out that they've been censoring pictures of one of the most common and powerful moments in many women's lives: that of giving birth.

Over the weekend, The Positive Birth Movement had its Facebook account suspended and some images removed after it was found to have "violated community standards" by posting images of women in the middle of labor and childbirth.

As Positive Birth Movement activist Milli Hill's excellent editorial in the Guardian put it, the move is anything but a minor squabble over nudity on Facebook.

Social media reflects our wider culture’s issue, not with naked women, but with naked women who look real and active as opposed to air-brushed and passive. It also reflects millennia of attempts to suppress women’s power, of which childbirth is perhaps the ultimate expression.

Birth is a fundamental feminist issue right now. It belongs to a wave of feminism that focuses on the female body, from #freethenipple, a movement protesting against internet censorship, to challenging victim-blaming when it comes to rape and sexual assault. The female body in childbirth has been sanitised and censored in recent decades: covered by drapes, silenced by drugs, and even devoid of pubic hair. As a result, we have a generation of women who have rarely seen or heard the reality of birth, and who have been told that when you have your baby you must “leave your dignity at the door”. Many women approach birth with fear and, perhaps worse still, often do not realise that they have the right to say no in the birth room just as they do in the bedroom and boardroom.

When I read Hill's piece, I must admit, I still didn't immediately jump to look at the censored pictures. As a feminist, I'm a little ashamed to admit that I am stupefied by the idea of birth. Conception (yes, I've experienced it) has never unduly disturbed me, but the idea of pushing a mammal the size of a modest watermelon out of my vajayjay? Try no way.

Given that we aren't referring to explicit legs-spread-for-titillation shots, but images of new life coming into the world, this is surely just the below-the-belt equivalent of breast-feeding pics. As ever, the issue isn't with women's bodies, but with our struggle to see them as anything other than sexual pleasure-mobiles.

Once I did take a look at the censored pictures, however, I found them quite beautiful. In one, a woman gives birth under water. In another, a woman kneels, the side of her naked form shown to the camera.

Neither censored image features graphic genital shots, bodily fluids, or delivery room trauma. It is a reminder that those brutal diagrams we looked at in biology, and the melodramatic scenes we've seen in film and TV, don't begin to convey the reality of the birthing process.

Around ten years ago, I used to think that my squeamishness around childbirth had its roots in the fact I didn't get along with my own mother. But as we've reconciled our differences and I've matured, I think my discomfort has far more to do with the fact I have never seen a birth, live or televised, and know next to nothing about what giving birth entails — other than the huff, puff, and pushing bit.

Given that I'm a sex journalist, prudishness isn't the problem. (In fact, I'm far more comfortable at the thought of watching a hand enter a lady's genitals than a head come out.) The same seems to go for Western society as a whole, even though around 11,000 childbirths take place in the U.S. every single day.

So while this most recent censorship story gives us yet another example of Facebook's illogical community standards (which often discriminate unduly against women who choose to show their bodies in nonsexual forms), it also raises an important question: Just where ARE all the non-sensational childbirth images in Western media? And why is it left to either medicine or medical dramas to educate us about how a female body grows and delivers a child, with insufficient information? The answer might have something to do with the fear society still feels towards the notion of women having full reproductive rights and bodily autonomy.

As a society, our obsession with the celebrity bump swells along with the ranks of Hollywood mothers. We see bump then trim tummy, with the baby appearing only usually when first photo rights have been negotiated. The reality of birth is rarely depicted.

There is, however, one notable exception to that rule: Kourtney Kardashian, of all people, and her refusal to keep the birthing process under wraps. Kourtney has inadvertently become one of contemporary culture's birthing icons. Not only has she allowed for cameras to capture her pregnancies from start to finish, but she controversially "pulled out" her son Mason, and later her daughter Penelope — on camera. While midwives' opinion on this has been that it's a perfectly normal way to participate in the birth of your own children, the mainstream media condemned it as "gross." Kourtney K, meanwhile, didn't seem to give two shits.

Meanwhile, vaginal births are becoming increasingly rare. A record number of American women, around one third, are now giving birth by C-section. While cesarians are medically necessary in some cases, the American College of Gynecologists and Obstetricians is keen to stop the tide of elective cesarians being granted to women who want to schedule their births or avoid vaginal delivery. But there seems to be a disconnect between that stated desire, and many doctors' enthusiasm for C-sections. As i09 reports, America's healthcare system may be the reason.

"The hospitals stand to make a lot more money on cesareans than they do on vaginal births," [Maureen Corry, the Executive Director of Childbirth Connection] said, "and we know this because we issued a cost report back in January called ‘The Cost Of Having A Baby in the U.S.'"

"Babies born via C-sections have an increased chance of having to be administered into the NICU [the neonatal intensive care unit] and suffer from breathing problems," she said. "Mothers are more likely to have a major infection, they are at higher risk for embolisms, for bleeding, and for long term consequences with each additional C-section, some of which can be life threatening."

One suspects that better, more varied representations of vaginal birth might help stop some women from being pushed into a C-section. And this is where the Positive Birth Movement comes in —its alternative narrative plays an important role in allAying women's fears and injecting some calm into the media's harried discussion of childbirth. Perhaps the best thing about the Facebook ban is that it will afford the group some welcome publicity.

Given that we aren't referring to explicit legs-spread-for-titillation shots, but images of new life coming into the world, banning these images is essentially the prequel-equivalent of banning breast-feeding pics. As ever, the issue isn't with women's bodies but with our struggle to see them as anything other than sexual pleasure-mobiles.

As for the Positive Birth Movement Facebook page, I really recommend you take a look. Artistic as well as anatomical, you'll see the page's images show everything from a bemused cat looking up at a birthing tank to a new mother cradling her just-born child. It may not have persuaded me that childbirth is for me, but it's definitely given me a more balanced perspective of what birth actually looks like.

And you know what? It looks pretty damn powerful. As Milli Hill suggested, perhaps that's what really scares the censors.