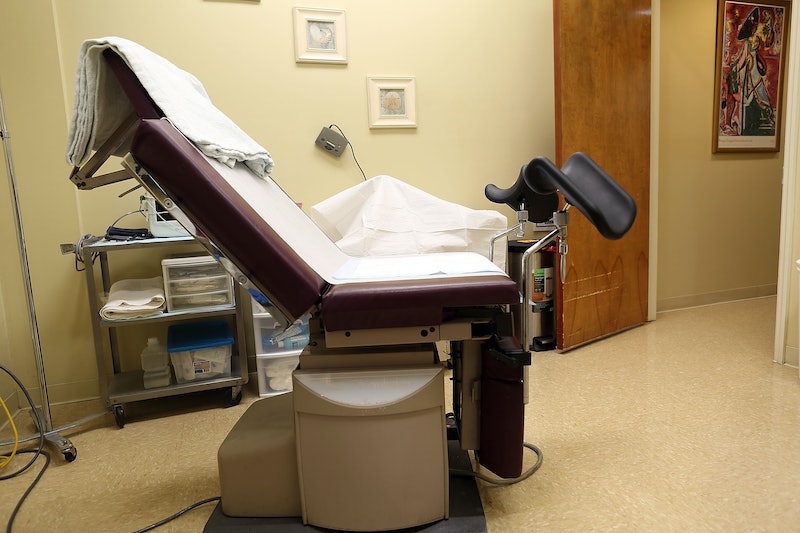 If ever a medical procedure has faced so much moral scrutiny, it is abortion. My own abortion, some seven years ago now, is a distinctive memory — though not because it was nastily dramatic, or enduringly traumatic. I wouldn’t go as far as to say it was uneventful, but the root canal surgery that took three months to get right caused me more enduring physical pain. My abortion is memorable because, despite having a loving, committed partner, I wasn't ready for children. I knew myself and took control over my own body and destiny accordingly, just as Emily Letts chose to do. Her bold and moving video documenting her own procedure, which went viral this week, reminded me of my own experience.

I had waited for my abortion with a taste in my mouth that veered between bloody aluminum and day-old potato. Having graduated in the top percentile of my college literature department, I was now back in my hometown, temping in a local hospital in order to raise funds to move to London and embark on a journalism career. I’d become pregnant after what must have been the thousandth round of unprotected sex with my university boyfriend of three years. I’d been anorexic and thus only sporadically menstrual for years. I had believed myself to be infertile.

I was not afraid of abortion. It was always going to be the decision I would make — I’ve never wanted children. But I had no real idea of what would actually happen once I’d told my family doctor to refer me to the clinic, which she did, swiftly. Within a week, I was at the specialist clinic for my first of two appointments. The first would set the abortion in motion, and the second would finish it.

The next day, it was as though my body had never been pregnant. The morning sickness had evaporated. My breasts shrunk a cup size. That was probably the most startling fact of the whole experience: Once done, my body bounced back almost immediately.

At the clean, spa-like clinic, I was shown to a scanning room then ushered up on to the bed for an ultrasound. I remember the cold lubricant jelly, the even colder prodding scanner, and the nurse squinting at the screen for the ... what to call it? It wasn’t a baby. It was a pregnancy. The nurse seemed satisfied she’d detected it, and continued making her notes.

For a moment, I lay wondering what to do. It suddenly occurred to me with a certain amount of dread: in order to get back to my seat, I would have to walk around the picture on the screen of that not-yet-baby currently alive inside of me. Don’t look, don’t look, I told myself. But still, I drank it in, that dark defuse cylindrical shape on the screen.

It looked nothing like a baby, nor even a fetus; in fact, it resembled nothing at all life-like. Yet the image has stamped its indelible print on my mind, and I’ve not forgotten it since. But it has not scarred me, and I never think of it as the child I might have continued to "grow."

I remember trying to peer behind the euphemisms uttered to me by the soft-faced nurse. "You'll pass it out in the toilet, just like a heavy period." But pass what? The routine lining of my uterus? The clumps of rapidly multiplying cells? Baby parts? I feared that there would be hopeless infant flotsam from the detached mothership floating in the toilet bowl.

But there was no baby. It was just like another heavy period. Albeit, a temporarily excruciatingly painful one. Twenty minutes after leaving the clinic I was back home and clutching the bathroom sink. I’d been sick in the car and was now pushing away my devoted boyfriend as I sucked in the air, stumbled to bed, and woke up three hours later, the tidal wave of cramps over, just quietly bleeding. I checked again. No, still no baby parts.

That evening, my boyfriend and I went to see the Devil Wears Prada and ate Chinese take-out. My vagina was not in any pain. My abdomen was barely tweaking. The next day, it was as though my body had never been pregnant. The morning sickness had evaporated. My breasts shrunk a cup size. That was probably the most startling fact of the whole experience: Once done, my body bounced back almost immediately.

As per the clinical advice, we waited a while to have sex, but I’ve never had any other gynecological problems since. I’ve consistently used contraception and not become pregnant again.

Still, one moment does haunt me: As I was waiting for the doctors to issue me with the second round of drugs at the clinic, another young woman suddenly appeared at a door from the back guided by a nurse. She was staggering a little, perhaps from sedation.

Either way, she’d had the surgical, I deduced. She sat in a chair, weeping from her bloated, inky eyes, writhing like a bereaved octopus. As she sobbed, I wanted to go over to her. She clawed at a passing doctor. What did it look like? she cried. I imagined a 20-week old fetus crying and writhing on a cold slate slab next to a scalpel and other surgical equipment, as everyone else tidied up around it.

While I don’t underestimate the unknown woman’s psychic pain, it seems that she was so caught up her distress and fear of what she had done to her body and her potential baby that she had no idea what had actually happened, as it was happening.

For years after, I wondered what she’d seen, and couldn’t equate my own abortion experience with hers. It wasn’t until I did research for an article on abortion in Ireland that I started to really dig up the details of what the procedure entailed. They were surprisingly hard to uncover, especially for such a routine, accessible, legal procedure performed with relative frequency in the UK — just under 200,000 times in 2012.

But then again, abortion isn’t always accessible. The United States has enacted more abortion restrictions in the past three years alone than in the past decade. The Pain-Capable Unborn Child Protection Act, sponsored by a cabal of male politicians, banned abortion after 20 weeks, and was based on the disputed scientific evidence that fetuses feel pain from this point onwards. Given that Roe v Wade set the limit at 24 weeks, the act significantly threatens women's rights — and all based on a point which leading fetal pain researchers contest.

That’s why women’s stories of abortion matter more than ever in setting the record straight, and why Emily Letts’ video is more than just a mere personal "share" on social media.

Abortion is not uneventful. But if more women had more realistic depictions like these at their disposal when it came to making such a personal decision, they would approach it with more knowledge, confidence, and agency.

I'd like to say thank you to Emily for enabling that. I know that her video would have helped me.