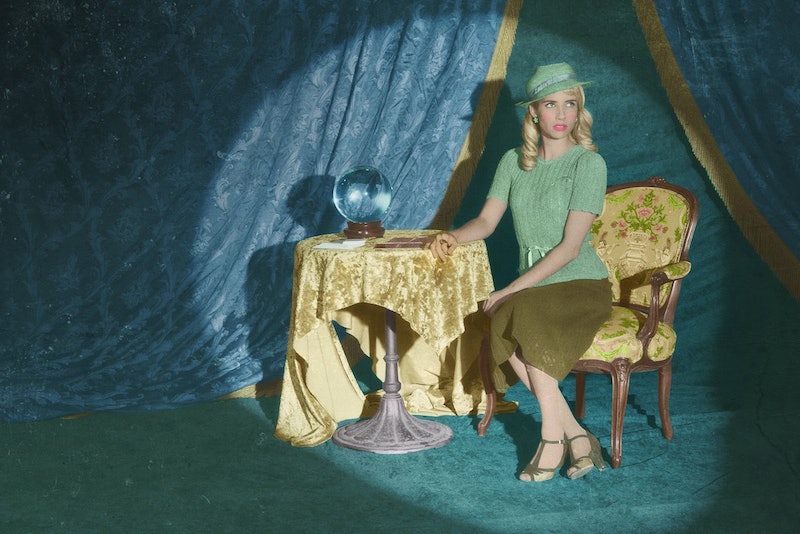 She was a Hollywood witch last season, and this season on American Horror Story , Emma Roberts plays Maggie Esmerelda, another character with a semi-magical talent. Maggie Esmeralda comes to the "freak show" as a fortune teller with her partner-in-crime Stanley (played by Denis O'Hare), when in reality she and Stanley are con-artists, who plan to steal Elsa's cast members away from her. But after watching her work her evil(ish) wiles on Coven, you have to wonder: Is Maggie Esmerelda evil?

Well, so far it sounds like Maggie is a wolf in sheep's clothing. She and Stanley are there to hurt the show (no one's buying that they are there to help Elsa make money in Jupiter), plus they aren't the only ones who are out to get the "freak show." Elsa's band of misfits has a lot of people working against its existence in the small town, so time will tell if it will be Maggie and Stanley, the cops, or the townspeople who actually manage to run the show out of town. But does that mean that Maggie is really the enemy? We already know she and Evan Peters' Jimmy Darling will have a romantic storyline.

Perhaps there is a chance that she Robert's Maggie Esmeralda could actually have a change of heart and help the show survive and not attempt to take it down like every other person on the show. Here are the signs we should be looking for:

Villain: She has no heart

It wouldn't be the first time a character on AHS has no moral compass, and that could be the case for Maggie Esmeralda — especially if she has a partner (Stanley) who also wants nothing more than to con the show.

Ally: She actually is a fortune teller

Because she is a con-artist, it could be assumed that she actually isn't a fortune teller, especially because that is pretty easy to fake. But if she is a fortune teller, perhaps when she gets to the show, she might feel all kinds of kindred spirits with the other members, and not want to con them.

Villain: She has a history with one of the members

It seems like there are a lot of sub-plots between characters this season, so it is possible that Maggie has some connection to a current member of the "freak show" and wants to get back at them for something they've done to her or her family. After all, she had to became a con-artist for some reason, right?

Ally: She falls in love with Jimmy Darling

The heart wants what the heart wants, and I feel like her heart could want Jimmy. Excluding the fact that Roberts and Peters are together IRL, Jimmy said that he wants someone who loves him and doesn't look at him like a "freak" because of his hands, and Maggie Esmeralda could be the perfect person for that. And when they do meet, maybe she'll realize that ruining the show isn't the nicest thing to do.