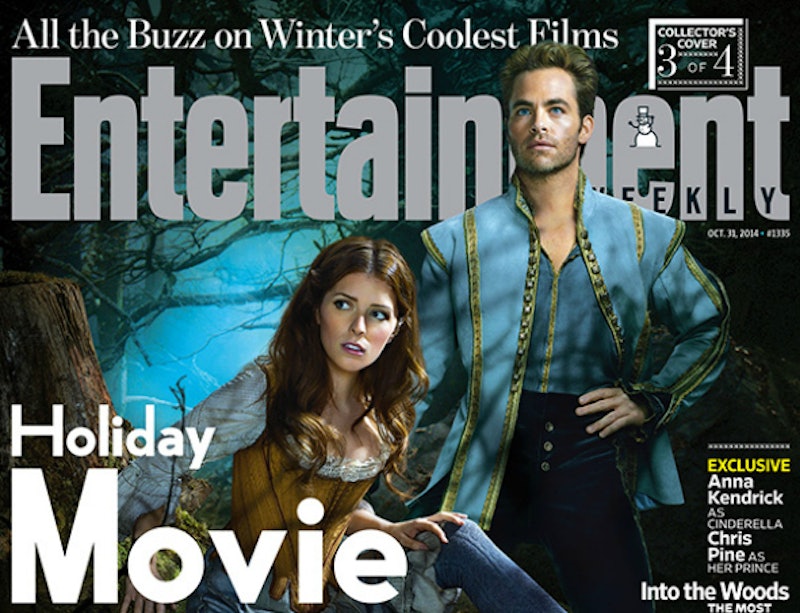 After some healthy early skepticism, many Stephen Sondheim fans seem to have given themselves over to the big screen adaptation of Into The Woods after the man himself confirmed that he quite enjoyed it. The film, he insists, is in keeping with the spirit of the Broadway show, it's "not only a faithful adaptation of the show, it is a first-rate movie." So what's up with the marketing campaign? The Into the Woods cast looks gorgeous on Entertainment Weekly's covers for them, but there's no sign of the things that made this musical a classic in the first place.

Maybe that's the plan: Make the non-Sondheimed masses think this is your run of the mill lushly-costumed fairytale movie, then let them have their rude awakening when they get to the theater. It'd certainly make for some interesting word of mouth. Because as many already know, Into the Woods isn't your run of the mill fairytale: It's very darkly comedic, emphasis on the dark. It's more Sweeney Todd than Ever After. Don't expect Chris Pine's prince character to be dashing and romantic, basically.

I'm not particularly sweating this marketing choice — a lot of people already know Into the Woods' schtick, and Sondheim's word says the movie retains that. But it is curious, to see the promo materials so thoroughly gloss over it. Here's to hoping we've only got to wait for the next trailer for a proper look.

In the meantime, it sure is looking pretty: