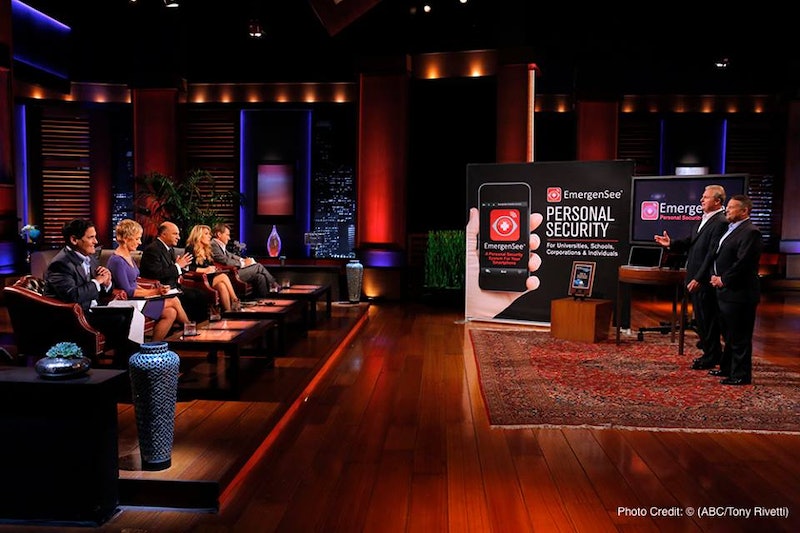 I'm all about instant gratification. Sometimes I'll watch Shark Tank and think that a product or service sounds fantastic, but I probably won't remember it by the time I go shopping a week later. But Shark Tank 's latest potential investment, the EmergenSee app, avoids that problem all together. EmergenSee is available with just the press of a (smart phone) button. The personal safety app is available both from the Apple Store and Google Play (and it's coming to Windows and Blackberry soon), so you can download it from nearly any device. And you can remain on your couch while doing so.

EmergenSee's creators, Jason Friedberg and Phil Reitnour, will both be presenting their product to Mark Cuban, Mr. Wonderful, and the rest of the Sharks on the Oct. 24 episode of Shark Tank. So what exactly does EmergenSee do? The app is designed to give people an extra level of personal security through their smart phone. If you feel like you're in a threatening or potentially dangerous situation, you can just press the app and your phone will immediately start sending live video and audio feeds to six preset contacts of your choice, along with your precise GPS location. Once your contacts get the email and text alerts that you've activated the app, they'll be able to see and hear what's around you, and know where you are.

The app was recently featured on The Today Show, watch the segment below.

It's a good sign that the Sharks will invest in a product if it's already gotten so much press coverage. But there's more to know about the app than it's premise and media coverage.

You know who likes free things? Everybody. You know who sometimes feels uncomfortable and potentially in danger and would like some way to alert their friends as to their current location? Also everybody. It's pretty much a no-brainer. EmergenSee does have extra features that cost money. For $8.99, you can get 24/7 Personal Monitoring, which includes automatic communication with a professional security team whenever you tap the app. Kind of makes you feel like the president, or a popular celebrity with overeager fans.

I hope no one hesitates to call the police if they feel threatened, however EmergenSee is very different from a regular phone call. It also provides footage of what's around you (so you can get video and audio to help identify a potential attacker, and other indisputable evidence of an encounter). And it provides your exact location, so the cops don't have to waste time tracking your phone. Best of all, EmergenSee can go Stealth Mode, meaning the screen turns dark as though you're not using your phone, when in fact it's recording everything around you.

The makers of EmergenSee say that their product is for "everyone," but as a young woman myself, I wouldn't be surprised if we make up the company's largest group of consumers. Yes, it is horrible that women are so often afraid of assault, and products like this can increase those feelings of fear, but Emergensee also gives the police more information, both to protect users and to catch criminals. Some universities and companies have also started it making available to students and employees, with campus security already plugged in. And if you're someone who works or spends time alone (like a delivery person, a jogger, astronaut, etc.) this app could come in handy regardless of gender.

Of course, I hope that no one who downloads EmergencySee ever feels they have to use it. But if they do, it seems like a pretty cool gadget to keep you safe.