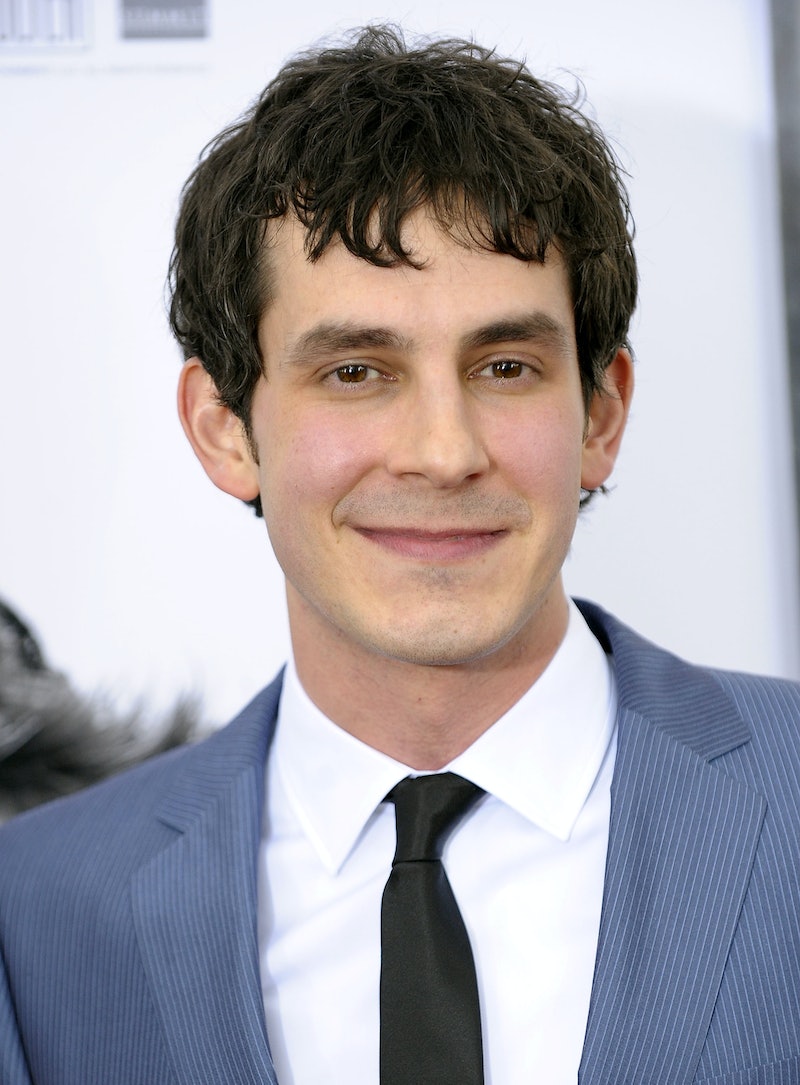 Listen, I will freely acknowledge that Matt Lauria, who plays Amber's baby daddy Ryan on NBC's Parenthood, is an incredibly attractive human... But I will be nothing but happy if last week's episode is the last we see of him on the show. My Bustle colleague Kelly Schremph has already enumerated all the reasons that Amber and Ryan shouldn't get back together, so I won't continue to beat that dead horse. Instead, I'll focus on the positive: it seems that showrunner Jason Katims is finally letting our girl move on, because Amber already has a new crush on Parenthood!

And playing Amber's crush is Tate Ellington, who is joining the notoriously tear-jerking drama in this week's episode, titled "The Scale Of Affection Is Fluid" as Griffin. We don't know much about him yet, other than that he owns a dog, he has a predilection for green jackets, and he pulls off nerd glasses like nobody's business (as evidenced in the promo shot below). Amber's budding flirtation with Griffin will undoubtedly be complicated by the fact that she's got a secret bun in the oven, but hopefully not too complicated to prevent Ellington from sticking around for more than one episode. Not that Amber needs a man, but I'd like to see her in one stable romantic relationship before the series ends.

But where have we seen Ellington before? Chances are good you recognize his face but probably can't quite place him. Well, allow me to alleviate your anxiety:

Back in 2010, Ellington appeared in one episode of the legal drama's first season, as a grieving man suing obnoxious talk show host Duck Roscoe after his wife committed suicide because of repeated allegations Roscoe made that she had murdered their missing child. (You can glimpse Ellington up there over guest star Craig Bierko's smarmy shoulder.)

That same year, Ellington had a supporting role in the Robert Pattinson and Emile de Ravin romantic drama Remember Me. (Yes, the one that's mostly remembered these days for its unnecessary 9/11 twist.) He played Aidan, the best friend and roommate of Pattinson's Tyler, who persuades Tyler to ask de Ravin's Ally out on a dare after the two friends get in trouble with her cop father.

If you frequent the independent film festival circuit, you may have caught Ellington in this 2011 drama starring Lee Tergesen (The Americans) and Enid Graham (Boardwalk Empire) as a messed up couple who enjoy manipulating strangers for sport. The film is told in a series of four vignettes, and Ellington co-starred in one with Emily Meade (The Leftovers) as a young couple who encounter the silver-tongued psychopaths in a hotel bar.

Don't Trust The B In Apartment 23

If you are one of the blessed few who watched this criminally-underrated (and prematurely-cancelled) ABC comedy, then you might recognize Ellington from the pilot, where he played the fiancé of Dreama Walker's June. Probably his most memorable scene was the one where she walked in on him having sex with her roommate (Krysten Ritter) on top of her severely smushed birthday cake. That's certainly an image I'll never forget.

Ellington appeared in both the Season 4 finale and the Season 5 premiere of AMC's popular zombie show as Alex, the disarmingly friendly resident of Terminus. In the finale, "A," Rick took Alex (who is also big bad Gareth's brother) hostage after he grew increasingly suspicious of the laid back stranger, and Alex was killed in the ensuing shootout. But, apropos of a show about the undead, Alex popped up again in the premiere, "No Sanctuary," in the episode's bookmark flashbacks, in which he and Gareth bemoaned their imprisonment.

But let's be real. What you really recognize Ellington from is the half-creepy/half-adorable car insurance commercial that features him washing a giant baby in his driveway. Mystery solved. (You're welcome.)