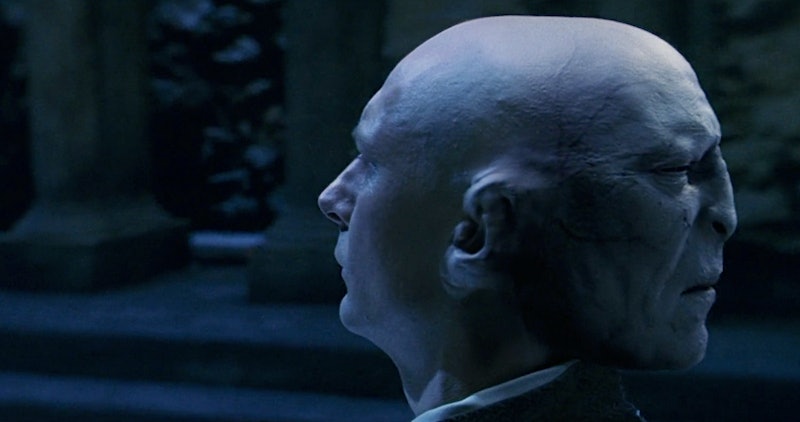 Oh, Twitter. Whatever shall we do with you? Of course American Horror Story pulls a dark take from history and you find a way to connect it to the boy who lived. Of course, I guess there was sort of a good reason. AHS ' version of Edward Mordrake does resemble Voldemort/Quirrell from Harry Potter and The Sorcerer's Stone. In the first book and film, Professor Quirrell removes his scarf to reveal Voldemort, living on the back of his skull and telling him what to do. Edward Mordrake, per AHS, had an evil man in the back of his skull telling him what to do. Eerily similar, no? There's just one problem: Harry Potter's version certainly doesn't predate the actual tale. Sorry, Potterheads.

That's because, the legend of Edward Mordrake is real. Sort of. It's basically an urban legend, but it dates back to Victorian England, not the booth in which J.K. Rowling penned her series of wizardly masterpieces. If anything, it's more likely that Rowling was unwittingly inspired by the spooky tale of a young man with an extra face. (Not that I'm trying to start any accusations of stealing ideas here. Rowling is a genius, OK?)

You know Potter fans. Always deferring to 'Arry before all else.

But at least there are the always gracious Twitter police to set them straight:

Now we can get back to worrying about what the hell freaked Dennis O'Hare's sexy friend out. (Spoiler: It was his giant penis.)