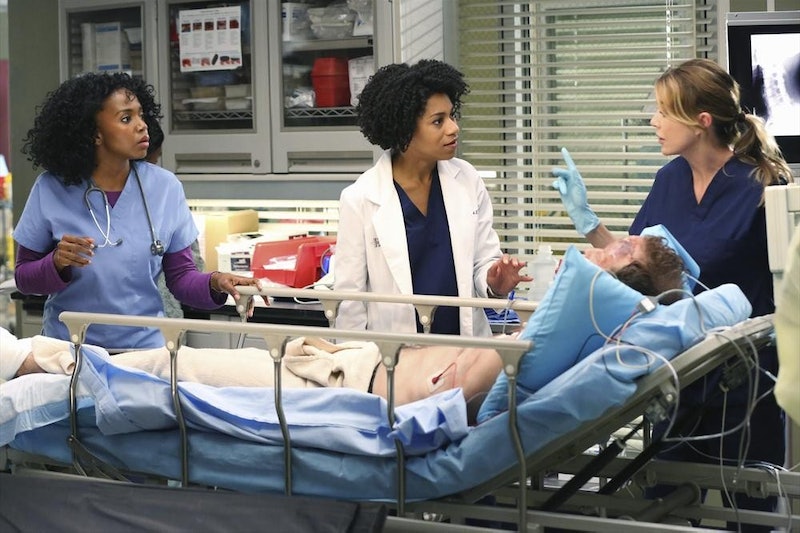 Where warm welcomes are concerned, Meredith's surprise sister Maggie on Grey's Anatomy hasn't exactly received any. And as much as I would love to be related to Meredith Grey, I'd hate to be Maggie right now. Her dad (Richard) kind of lied about being aware that he was her dad, and the sister she went through all this trouble to meet wants nothing to do with her. Now, Maggie has a decision to make: Will she stay or will she go?

If you ask Kelly McCreary, who plays Maggie, her status as a Seattle residence isn't looking good. “There aren’t a lot of reasons to want to stay at this point, and there are a lot of reasons for her to go home," she told Entertainment Weekly. "At this point, the only reason to stay is to see if there’s any drop of information about Ellis. That might be enough to keep her, but it might not.”

But regardless of the way things look right now, I definitely think she's going to stay — and might end up even becoming a permanent fixture on Grey's, for however much longer the show will last. OK, yeah, she already turned in her official resignation from Grey Sloan Memorial Hospital, but how many times have various doctors quit or been fired only to call a do-over the next episode? If Maggie wants her spot in the cardio department, it's all hers, especially since her coworkers all seem to love her so much.

She also seems to be on the right track with Meredith, and Derek showed his first signs of humanity all season in last week's episode when Maggie finally revealed herself to be his sister-in-law. I've really been anti-McDreamy lately, but the scene he shared with Mer's sister gave me some hope that he could be redeemed. How awesome would it be if Maggie was able to help figure out how to salvage their marriage? And while we're dreaming big, what if the whole having a sister again thing is cathartic enough for Meredith to get her surgical mojo back? Could we see a Grey Method sequel, created entirely by Ellis Grey's offspring?

Also, let's think about the way Shonda Rhimes writes for a second. Would she neglect to tie up loose ends where two major characters like Richard and Meredith are concerned? No, she would not. I think we'll see Maggie eventually become the daughter Richard always wanted and the sister Meredith needs, which would be beautiful. At least, that's what I'm hoping for, because like it or not, Mer needs family.

Maggie, please stay. There's the potential for so many fresh storylines here, and I really hope we get the chance to see them play out.