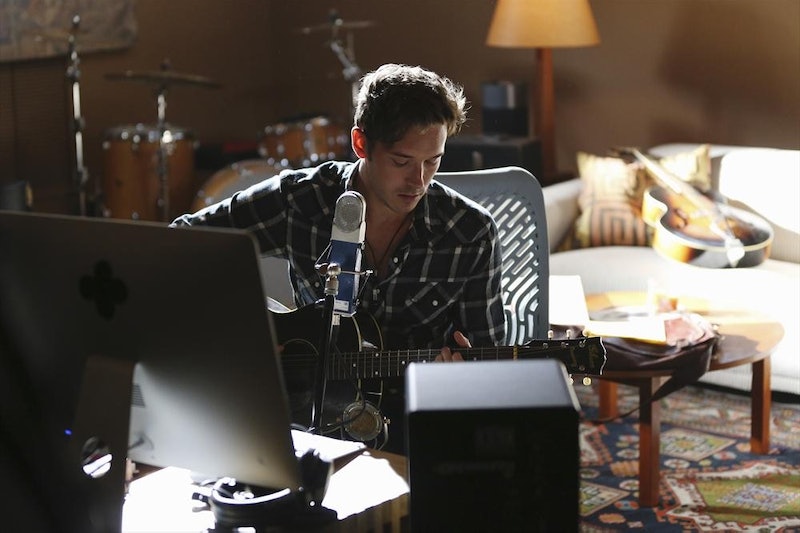 It looks like Avery isn’t the only baby daddy on Nashville anymore, now that Gunnar has a secret love child with his ex-girlfriend Kiley. Just in case we weren’t all clued in by the extremely unsubtle panic that was written all over Kiley's face when her nine-year-old son Micah surprised the two of them at the diner, or the second time when he very candidly revealed his age, she admitted at the very end of the episode after Gunnar pressed her that Micah was, in fact, his son.

The fact that a confession that big took all of one episode to spill out of Kiley makes me think that we are still far from knowing the total truth about her character. If Micah really is Gunnar's son, what reason did she have to keep it from him when they were young and cared about each other? And why would she only get in touch now, if they've supposedly been living near each other for the last few months? Kiley seems perfectly nice, but the timing of this all seems a little suspicious — suspicious enough that I'm wondering if this internet oil rig boyfriend of hers is even a real human being.

One dastardly explanation might be that Micah's father is actually Jason, Gunnar's older brother who died last season. It would totally make sense for her to hide the pregnancy from Gunnar when they were younger if she was secretly carrying his brother's baby, and not to sound totally grim and like I've lost all faith in humanity, but it would also make sense for her to come out of the woodwork now that Jason isn't around to call her out on a lie.

Either that, or Kiley is totally telling the truth and I'm just a horribly suspicious person who should invest in a cheerful life coach. But seriously, if that kid is Gunnar's where did that head of dark curly hair from? And more importantly, how is Gunnar going to tell Zoey? Their relationship has survived a lot, but a secret love child might just be the final straw.