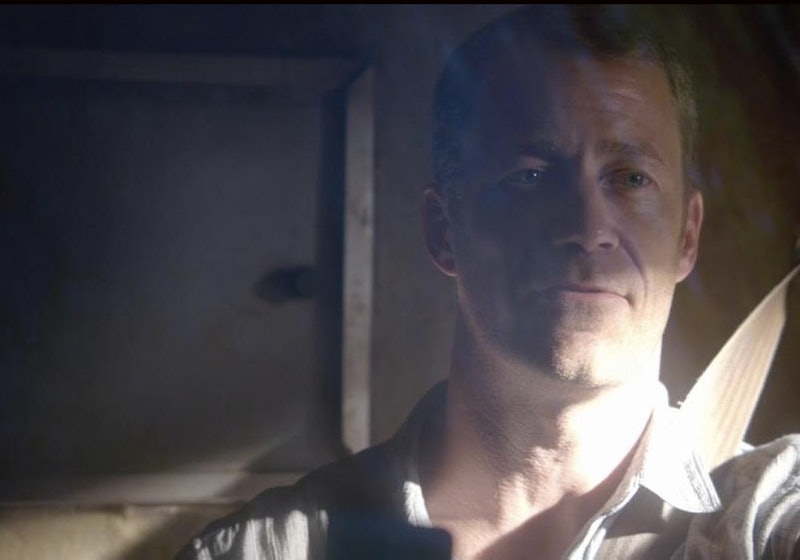 Does anyone else have a recurring dream where they're locked in an armored truck and end up burning to death? Oh, that's just me after watching the second episode of The Vampire Diaries Season 6? Fine. During last Thursday's episode of TVD , Stefan joined forces with Tripp in what'll probably be his worst decision on the series to date. And, while trying to kill Enzo was pretty shitty, I'm more worried about Stefan's fate than whether or not he's evil again. This Tripp guy is shaping up to be a ruthless character — I mean, he just kept on driving while he incinerated a handful of vampires — and TVD's revealed nothing about him aside from the fact that he comes from a founding family. And I have a feeling he's got a grudge.

First of all, Tripp Cooke isn't really this guy's name — his real name is Thomas Vincent Fell III. Yes, of those Fells of Mystic Falls. So, like Matt learned after quite some time, Tripp is well aware of the supernatural presence in Mystic Falls. Which also means that he's probably seriously pissed off about the fact that his family members (the relationship is still unknown), Logan and Meredith Fell, coincidently fell (ha) in pretty deeply with vampires. I mean, Logan (that jerk who cheated on Aunt Jenna) actually became a vampire and Meredith accidentally turned Elena into a vampire because she was giving vampire blood to her hospital patients. There's no possible way we can assume that Tripp has no idea about those two, right?

So far, TVD has revealed essentially nothing about Tripp's intentions or why returned to Mystic Falls just in time for the Traveler spell to kick in — nor do we know how he secured his position of power in the Mystic Falls protection committee. What we do know, however, is that he was friends with Jeremy and Elena's dad, Grayson Gilbert — you know, the vampire hunter/Augustine member. Which, surprisingly, opens up a lot of options for what exactly Tripp's doing in Mystic Falls and why he's massacring vampires in his truck.

His cousins or siblings or whatever Logan and Meredith are to Tripp both ended up ingrained in the vampire crowd of Mystic Falls. Coming from a Founding Family and being someone that was bullied by their father for many years, it has to piss this guy off.

Sometimes I feel like if you blink while watching TVD, you'll miss something. Which is why I honestly had forgotten that Grayson Gilbert was, apparently, a vampire hunter. (There are just no bounds when it comes to the Gilberts' involvement in the supernatural.) And, considering Grayson and Tripp grew up together, I wouldn't be surprised if Julie Plec would have this innate desire to kill vampires be something those two had in common. Said innate desire, would also drive him to devote his time to rounding up vampires surrounding Mystic Falls and burning them to death, just saying.

Is there anything Grayson Gilbert didn't do? In Season 5, TVD revealed that Grayson was also a member of Augustine, the group the tortured and did scientific research on vampires. It's possible that he and Tripp took their childhood friendship down to Whitmore College to do some science on some vampire prisoners. Birds of evil feathers fly together.

Tripp could also just really be into killing things and/or a pyromanic. TVD has gone to strange places before, so that wouldn't surprise me.