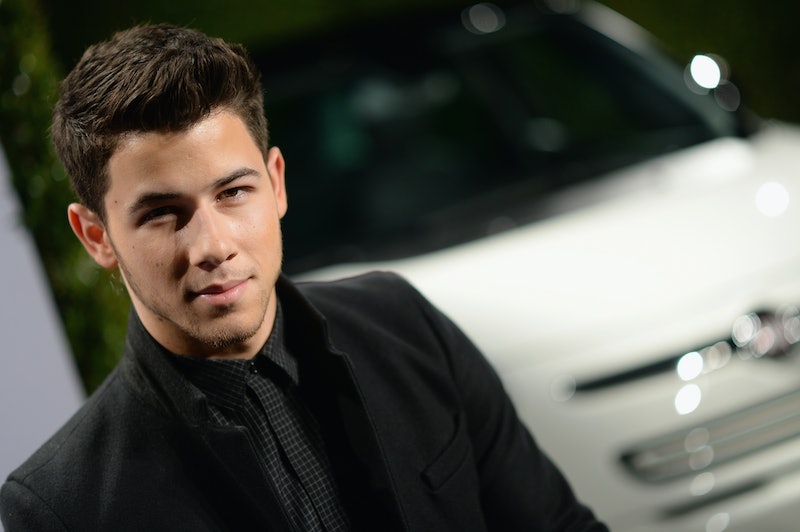 Remember a few weeks ago when everybody freaked out about those shirtless Nick Jonas photos? It was probably because they showed that he's grown up since his Jonas Brothers days — like, really grown up. In an interview with Canadian show etalk on Wednesday, Nick Jonas opened up about the shirtless shoot for Flaunt magazine and the inspiration behind it. The underwear photos (complete with crotch-grabbing) were supposed to be a tribute to Mark Wahlberg's Calvin Klein ads. While the shoot was a huge success (considering it got everyone talking), don't expect Jonas to become a professional model anytime soon. He seemed super humble about the whole thing, saying, "That was a fun shoot, but I'm not really sure [about becoming a model]... It's a lot of pressure."

It's understandable that he'd feel too much pressure, but if he did want to pursue a modeling career, I think it's a really great idea! If his solo music doesn't work out, he could have a solid future posing for the camera. I mean, did you see the photos? Even he was surprised by what they looked like and the reaction they received. He said,

I didn't really think about it as we were doing it. I'm a fan of Mark Wahlberg, and I've always been a fan, and as I've transformed physically, there have been some comparisons ... I was just like, "Yeah, yeah, let's do it, let's go for it." And after it was done, I was like, "Oh, wow."

"Oh, wow." It's kind of precious how humble he is! The phrase "transformed physically" sounds like he's speaking very formally or scientifically, instead of being like, "Hey, everybody. I grew up and look great!" And in case you're looking for another reason to adore him, he's loves pizza... a lot. When asked why he couldn't be a model, that was his excuse: "I like pizza. I like cheeseburgers." While I'd argue models are allowed to eat pizza (don't stereotype them!), it's showing how modest he is — that he doesn't think he has what it takes.

While he doesn't see himself as a future model, I've rounded up proof (aka photo evidence) of why he'd make a good one:

On the TV show Kingdom

Oh, and I'm not the only one who thinks he has modeling potential — a major company does too! Apparently after the shirtless shoot, Calvin Klein reached out to him, but he declined their offer. Don't worry though, he hasn't ruled it out for good: "If an opportunity came up and it felt right and didn't feel forced, then maybe. We'll see."

OK, while we all cross our fingers waiting for that to happen, can we just take a moment to appreciate how he's "transformed physically" over the years? This was him in 2006: