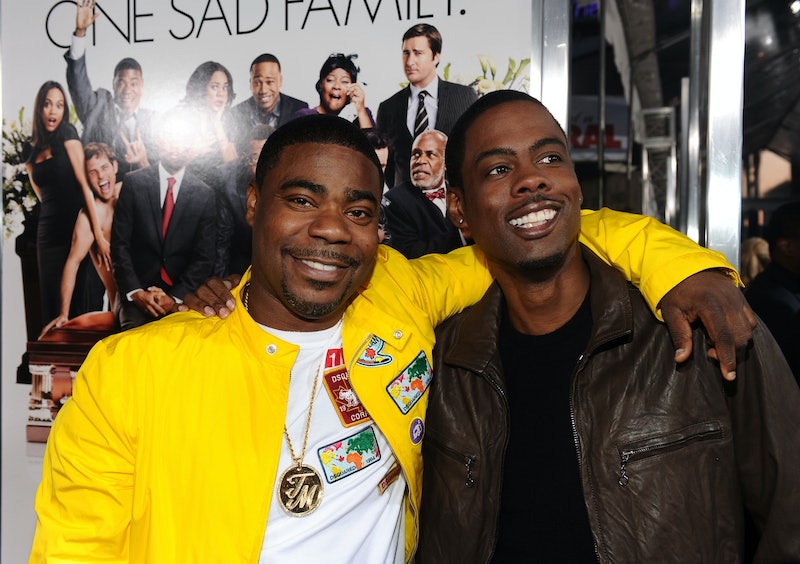 The Tracy Morgan news just gets more and more heartbreaking with each passing day. On Thursday, the former 30 Rock star's good friend Chris Rock gave a little update about Tracy Morgan's rehabilitation process after his horrific accident with a Walmart truck earlier this year. Rock said that Morgan is doing "OK," but he, understandably, "remains traumatized." It's been four months since the incident in which Morgan was severely hurt in an accident which injured six others and was fatal to Morgan's friend, James "Jimmy Mack" McNair, who was 62 at the time of his death. Chris Rock's comments seem resigned and soft, and they remind us that beyond the myth of Tracy Morgan, he's a human being who's suffered greatly.

What I mean is, there are certain auras that surround some celebrities who distance themselves from the people that they actually are. Tracy Morgan, who played a slightly fictionalized version of himself as Tracy Jordan on 30 Rock, is one of those comedians whose career has been marked by his antics. You know, like taking his shirt off any chance he gets.

But after such a devastating incident, Morgan's genuine appreciation for his fans surfaced. In a statement addressing Walmart's blame of the SNL alum because he wasn't wearing a seatbelt, Morgan thanked his supporters saying, "I want to thank my fans for sticking with me during this difficult time. I love you all. I’m fighting hard every day to get back."

Rock, who co-stars in the soon-to-be-released film Top Five with Morgan, is close friends with the comedian. Rock went on to say, "He doesn't live too far from me. I went by his house and showed him a copy of the movie. He was very happy. He's got physical therapists. There's a lot of rehab going on. He's traumatized — his friend died." It's a simple statement that does not address if or when Morgan will return to the entertainment world, and that's probably for the best. Reducing Tracy Morgan to his career would be unfair and disrespectful to his recovery process. The man is struggling to walk and mourning the loss of a friend, so I think it's a bit too soon to wonder when he'll revive his career. That said, it's great to have an update from Rock about Morgan's health, especially one that puts things in such perspective.