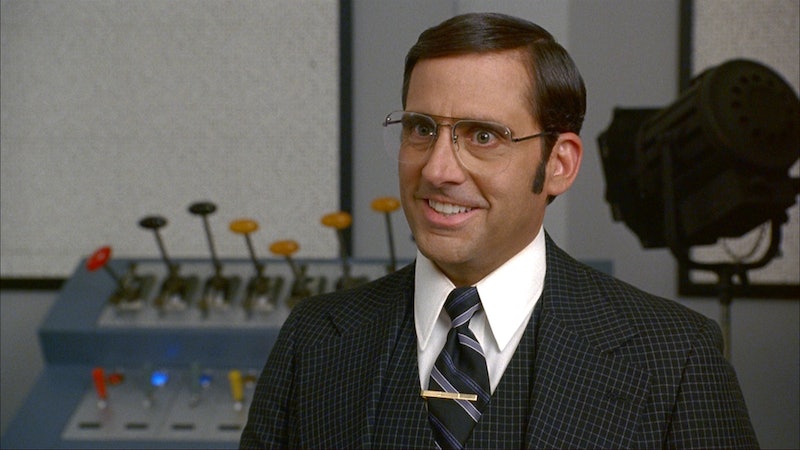 When I heard that Charlie Kaufman was working on a new movie, I was thrilled. When I heard it was a science-fiction satire, I climbed to ecstatic. When I heard that Steve Carell was on board to star, I dropped a ways to cautiously optimistic. But when I heard that the premise of the film would inflict Carell’s scientist character with an ailment that would make him dumber and dumber, I heaved a tired sigh. I’ll always have Synecdoche, New York, I guess.

See, it’s not that I don’t trust Kaufman, nor that I think the story with which he is working, an adaptation of the sci-fi novel IQ 83 , is an unworthy prospect. It’s the combination of that plot — one that will entail its main character to embrace brazen comic idiocy — and its star that worries me. We’ve seen Carell do stupid. In fact, we’ve waded through the incessant era from which Carell’s stupid shtick was born: an era of Will Ferrells, John C. Reillys, and Zach Galifianaki parading their intellectual shortcomings with a pride that borders on noxious. The era of the manchild.

The gambit hit a career low in 2013’s Anchorman: The Legend Continues. Patron saint of the thickheaded alpha male identity Ferrell delivered racial epithets with the subtlety of a wrecking ball, while his chief apostle Carell literally squawked and squealed in consumptive stupor. But the toxins of the routine are hardly limited to this particularly laughless ordeal. The past two decades, dating back perhaps to the beloved antics of Chris Farley and David Spade, or (less blasphemously, I’m sure) to the abrasive babblings of Adam Sandler, have been lined with comedies celebrating the charms of the idiotic male — the sort who decries responsibility, who neglects consideration, whose values rarely exceed his own immediate interests.

On plenty of occasions, the world has laughed at the Billy Madisons, the Lloyd Christmases, the Tommy Callahans, the Ron Burgundys, and the various forgettable Carell characters seen in Anchorman, Dinner for Schmucks, and The Incredible Burt Wonderstone. But these laughs have been treated as venerable get-out-of-jail-free cards for deliberately idiotic and ignorant behavior. An ever-flowing tacit endorsement of the sort of ideology that should be castigated, not imitated and quoted.

What’s particularly funny about characters like Ferrell’s Burgundy and Ricky Bobby, ditto Carell’s Brick Tamland, is that they were created in the interest of satire. Anchorman and Talladega Nights set out to subvert and ridicule the hypermasculinity associated with the American identity. But somewhere along the line — somewhere around Step Brothers, in fact — the game shifted. The world wasn’t being asked to shake its head at Brennan and Dale, but to nod in encouragement of their freedom of spirit… and intellect.

And beyond being lewd, abrasive, and downright dumb, this tradition of our cinematic culture has been wholly chauvinistic. With so many Ferrells and Carells traipsing about with deadhead stares and nonsense dialogue, we rarely get a female character — almost never a female lead — who is decorated in the same fashion for her comic idiocy. Even the “wild and wacky” comedies that we’ve seen assigned to women, notably Bridesmaids and The Heat, give their characters far better heads on their shoulders than the aforementioned male-led flicks do theirs. This isn’t a critique of Bridesmaids or The Heat, but of the “manchild” genre for sticking so rigidly to its nomenclature. Hell, even Bad Judge, a sitcom produced by Ferrell and Anchorman director Adam McKay, doesn’t render its lead — Kate Walsh — a total dunce. Women must be serious and on the ball in order to win our sympathies. Meanwhile, toxic presences like Ron Burgundy and co. are granted automatic redemption.

And what about the women in these movies? How do the leagues of levelheaded, sympathetic ladies who suffer endless misfortunes at the hands of these dimwitted men but grow to love them nonetheless? Because, as the films suggest, obnoxious, crude, thoughtless behavior is synonymous with boyish charm. It’s all in the name of embracing that preadolescent whimsy, or macho obstinacy. These pure ideologies that subsist on the notion that being “right” is decided internally, and based on no consequence that might lie elsewhere. So anything these characters do is forgivable, and it’s the charge of the rest of us — the women who surround them in particular — to put up with it and make sure nothing catches fire.

To be perfectly frank, it’s getting a tad old. Even if you can look past the sociopolitical ramifications of the trend, the whole bit is simply played out. Carell’s “stupid” can’t have too many folds and layers left to it. Even with the genius Kaufman behind him, it’s hard to predict a wholly surprising performance from the actor in a film whose very tagline calls for complete and utter idiocy. After a full sequence of pterodactyl noises hacked up in Anchorman 2, there’s really nothing new to explore.

Because of Kaufman’s dynamite track record (everything from Being John Malkovich on, with the possible exception of Human Nature, is truly spectacular) and Carell’s impressive tenacity when it comes to drama (though he might be forever stuck in the squawking game, he operates more than capably in Little Miss Sunshine and the upcoming Foxcatcher), I can bounce back up to cautious optimism. Let’s just hope there are fewer pterodactyl noises in this one.

More like this
At 14, Tatiana Maslany Was Obsessing Over Tamagotchis & The Spice Girls
By Gabrielle Bondi
Fabien Frankel Has History With 'Game Of Thrones' Emilia Clarke
By Sam Ramsden
What's New On Netflix: A Third '365 Days' Movie & Lili Reinhart’s New Film
By Arya Roshanian
Naomi Osaka & Emma Raducanu’s Experiences Have Inspired A New Amazon Show
By El Hunt
Get Even More From Bustle — Sign Up For The Newsletter