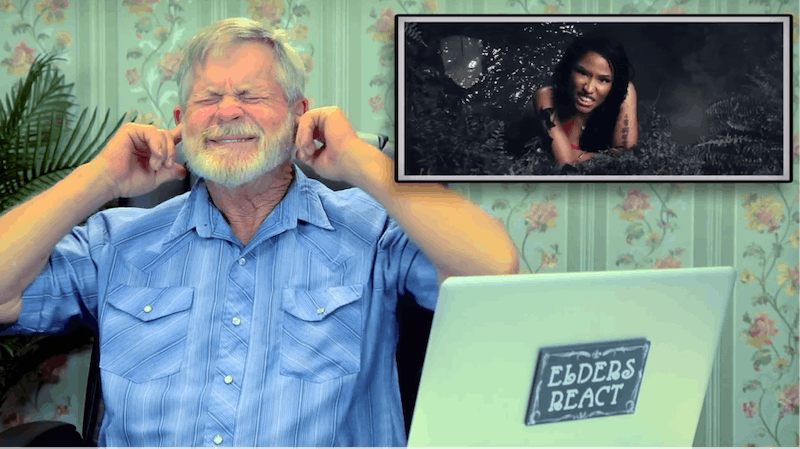 It was inevitable, but that doesn't make us any less grateful: The perennially wonderful Fine Brothers have finally given us elders reacting to Nicki Minaj's "Anaconda", and it's as cringe-inducingly good as you would hope. Plus, it's the only video you could reasonably expect to see a full-grown man gaping at Nicki Minaj's butt and saying, "booty booty" just before turning to the camera and earnestly discussing the unfairness of wage inequality between genders. The video features a lively group of people from a generation that is largely a bit outside the scope of Nicki Minaj's target audience, sitting down to give their feedback as they watch the glorious ass-fest that is the "Anaconda" video. As you can imagine, it inspires some rather candid and honest commentary. Thank you, old people, for always putting our generation's nonsense shamelessly in its place.

"Oh, yes you do, darling," says a woman in response to Nicki's brag about having "a big, fat ass." Others go on to express their mounting discomfort during the viewing. While we can't be all that shocked by the disapproval of the older generation, I was a bit surprised by their impressive level of sass while commenting on some of the video's riskier elements. "That's a lot of cleavage. And it's not on her chest!" quips one gentleman. After they finish watching the video, the brothers Fine ask each member of the group how they feel about about the video and Minaj's intentions, which brings up a lot of interesting points about how material in music videos has become more controversial over time, and whether or not Minaj is intending a feminist message in her video.

“Shake something else!" says the woman in the video who is arguably the sassiest of them all. "Shake your fist in defiance and make the world a better place. Byeeee.”

This isn't the first time the the Fine Bros have shaken up views on pop culture between generations. In previous videos they have shown teens reacting to 80s fashion, as well as little kids reacting to the Harlem Shake (which is adorable and demands to be watched). What's next, guys? Babies react to self-help videos? Dogs react to grumpy cat memes? Only time will tell.