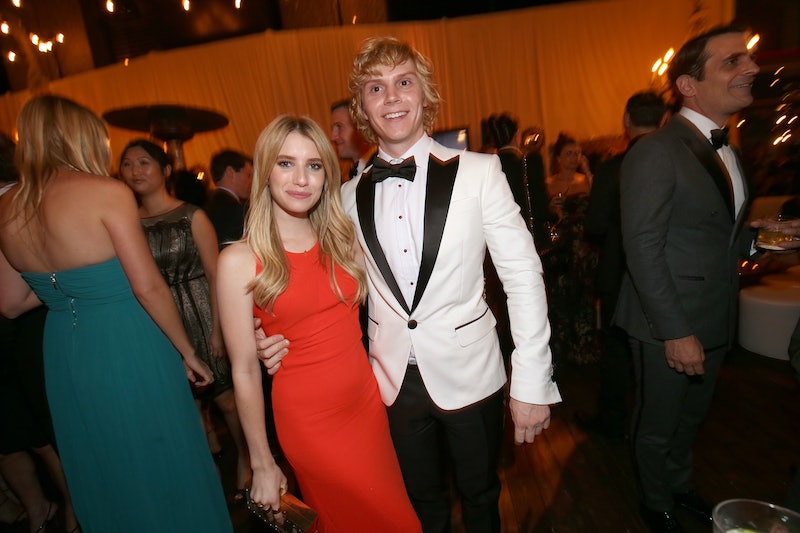 Yeah, it's an empirical fact that Emma Roberts and Evan Peters are the coolest, scariest couple around. The two met on the set Adult World, truly fell in love on the set of American Horror Story — which is the best meet-cute ever — and they are betrothed to top it all off! But did you know that Peters, who is 27 but has such a boyish scamp kind of face, has had a life and a career besides his badass turn on AHS? Yep, Evan Peters has had tons of other roles. It's just difficult to believe because he's become so intrinsically linked to the campy horror show which is a smash and also — TWISTY THE CLOWN THIS SEASON OH MY GOD.

But I digress. Peters has had quite a variety of roles in his past — some comedic, some creepy, and some just plain great. And many were on huge shows (his best pre-AHS role, in my humble opinion, was as Luke, Michael Scott's nephew on The Office). It's one of those cases of "Where do I know that guy from?" Only the guy in question plays a ghost/murderer on American Horror Story.

If you're hankering for more Evan Peters while waiting for the next installment of Freak Show, these past performances of his will get you through from Wednesday to Wednesday.

Peters was on one of the most tense episodes of House, which is saying something. The plot of "Last Resort" followed a gunman who traps Dr. House, Thirteen, and a bunch of patients in Dr. Cuddy's office. Peters plays Oliver, one of the unfortunate hostages.

In "New Plan," Peters plays everybody's wholesome prom dream date. He's Haddie's boyfriend Alex's friend Brandon from the community center (sigh) and he's soooo nice to Amber and even drives her home when all the haters are hassling her about college. What a gentleman.

Peters' most chilling (and sad) role before American Horror Story was definitely his guest spot on an episode of Criminal Minds. He played Charlie Hillridge, a little boy who had been missing for eight years after he was abducted by a man who has begun to abduct children anew. The BAU frees Peters who helps them bring the other children to safety. :'( but also :').

"My name is Luke Cooper. I love cinema. My favorite movies are Citizen Kane and The Boondock Saints." In one of the best episodes of the later seasons of The Office, Peters plays Luke Cooper, Michael Scott's lazy, misbehaved nephew who is working at Dunder Mifflin as a horrible office assistant. He screws up people's coffee orders and terrorizes Oscar with a laser pointer. And then Michael Scott SPANKS HIM. (Fun tidbit: Kathy Bates, Peters' formidable co-star on AHS, was also in this episode!)

His name was Seth Wosmer. He dreamt of improper fractions. His small pleasure in life was discovering potato chips that resembled presidents.

His nickname was Spongebob. He tried to woo ladies by showing them a picture of himself in a coma (which, I think, is an excellent tactic).

Peters is the newest, most adorable, charming and mischiveous addition to the X-Men, Quicksilver. Look at him, saving the day while still knocking hats off these guards. Cheeky little mofo. I love him.

More like this
'Yellowjackets' Just Announced Who’s Playing Adult Van & It’s Perfect
By Gretchen Smail
Josh Peck Shows Love To Jennette McCurdy After Her Shocking 'iCarly' Revelations
By Radhika Menon
At 14, D'Arcy Carden Was Sneaking Out To Parties & Crying Over Kurt Cobain
By Ivana Rihter
Steve Martin Hints That He May Retire After 'Only Murders In The Building'
By Jake Viswanath
Get Even More From Bustle — Sign Up For The Newsletter