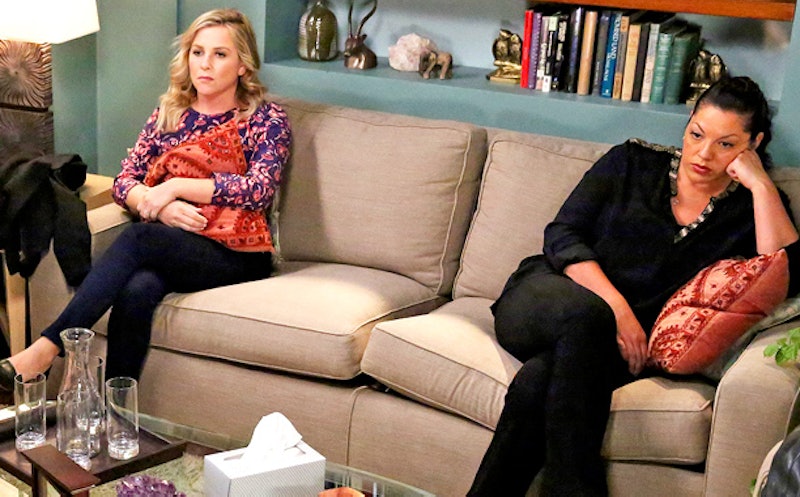 Thursday night's episode of Grey's Anatomy was so painful for fans of Callie and Arizona. The couple had been arguing a bit at the beginning of the season about Arizona's new fellowship and whether they were going to adopt a baby or not. But all of it was hashed out for this week's episode and at the end of the painful 60 minutes, Callie came to a pretty sad conclusion—she wants out of their relationship, so it looks like Calzona is done. It's worth mentioning that she didn't straight up ask for a divorce, but she did say she felt so much freer not worrying about fixing the marriage all the time, so that seems like it's pretty over to me. But maybe it's time for fans to let Calzona go.

I know, I know. I've been a fan of the pair since they first started dating. I watched them go through breakups, deaths, cheating, and more. But I saw them survive it all, and I thought they were stronger for it. I even argued for why Calzona had to stay together. But perhaps I, and they, were holding onto something that wasn't healthy any more. As the couple's marriage counselor pointed out: they are not the same people they were when they met, and maybe it's time they do go their separate ways.

I didn't go into this episode thinking this is how I'd feel at the end. But Callie's tearful confession about how holding onto the marriage was killing her made me rethink things. She said that for the first time in a long time she was laughing again and excited about her work and happy—but she was those things without Arizona.

Fans shouldn't love these characters only as a unit. Fans should love them independently and want their happiness, whatever that might mean. If them being happy means staying together—great. But right now it seems that for Callie at least, she would be better off stepping back. And Arizona might not realize it now, but she would probably be happier too.

As Arizona mentioned, the pair's problems stem back to way before she lost her leg. Arizona still holds resentment over Callie not going to Africa with her and sleeping with Mark Sloan. She loves her baby, but she's mad she wasn't allowed to make that decision to have a child with Callie.

Those are some deep issues and add to it the fact that Callie never really forgave her for cheating and it's just a relationship full of more pain than happiness right now. I truly think Callie thinks she will be better off without the marriage. I also think it's sweet that she wants the best for Arizona even if that means focusing on themselves instead of each other.

Obviously the pair will always be in each other's lives because they work together and have a child, but if they'll be happier without that pressure of constantly mending a relationship, then maybe they really should end it. It may be sad in the short term, but in the long term focusing on loving themselves first could be what makes them whole again. And after seasons of sadness and tragedy and anger, I really just want these characters to be happy—even if that means they're not together anymore.