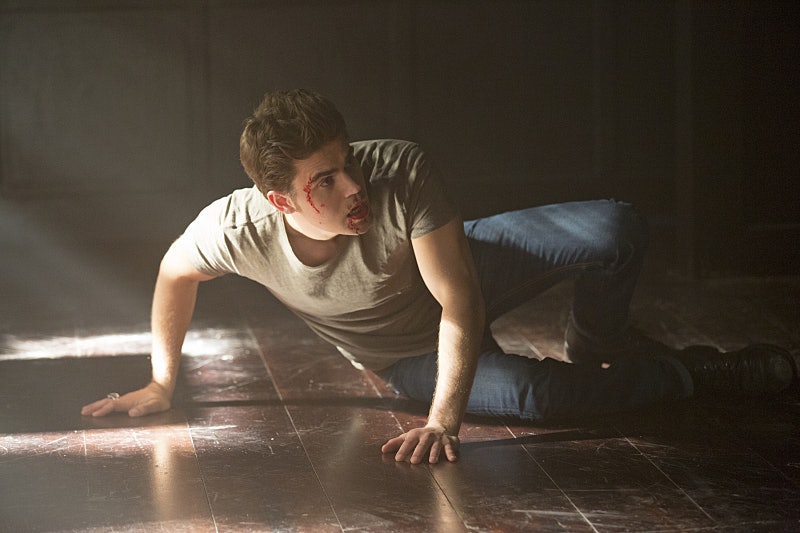 I have a new appreciation for what I believe to be Paul Wesley's sense of humor. Because the only thing missing from Thursday night's episode of The Vampire Diaries was a "Welcome to the O.C., Bitch." Apparently, Stefan's friendship with Tripp Cooke from last Thursday's episode was a short-lived situation, because Stefan tried to bounce again during TVD on Thursday but, this time, Elena went with him. And, apparently, "starting a new life" isn't the only way this Salvatore brother is coping with Damon's death — Stefan's getting into fights "to feel" on TVD , which sounds a lot like The O.C.'s Ryan Atwood after Marissa's death.

Why am I crediting Wesley for this homage to the great Ryan Atwood? Well, because, way back when, before he became immortal, Wesley guest-starred on The O.C. as a guy from the wrong side of the tracks that befriends Ryan and then shoots up a Newport party. He was only on for a few episodes, but Donnie left a lasting impression on me, obviously. And apparently, a lasting impression on Wesley because there's no possible way that the actor didn't make a connection between Stefan picking a fight with a guy in a bar and running away from his brother's death and Ryan running away from Marissa's death and joining and underground fight club.

The parallel is just too perfect. It's a classic case of a guy with pent up emotions, dealing with it the only way he knows how — picking a fight with the first guy he sees. Well, maybe it's not exclusive to just guys, vampires can get in on this, too. On Thursday night, after trying to teach Elena how fun it is to just invent a new life for yourself instead of feeling your pain by staging an elaborate engagement in a bar (lol), Stefan picked a fight with a random guy for not "celebrating" his engagement. Nope, not kidding, that was his actual reason.

Elena had to break it up and it was just, generally, really awkward. And then Stefan revealed that this was his way of coping with Damon's death — he doesn't feel anything anymore, he can't even feel his pain. So he's been getting into fights just for kicks. Which I guess is kind of the same as Elena compelling her pain away, just significantly more extreme.

Obviously TVD fans know that Stefan is sensitive and, while I LOVE this reference, I feel like TVD could've done better, overall, with everyone's grieving process on the show. I'm feeling less empathy towards these characters than I should at this point because they've all just become kind of a joke.