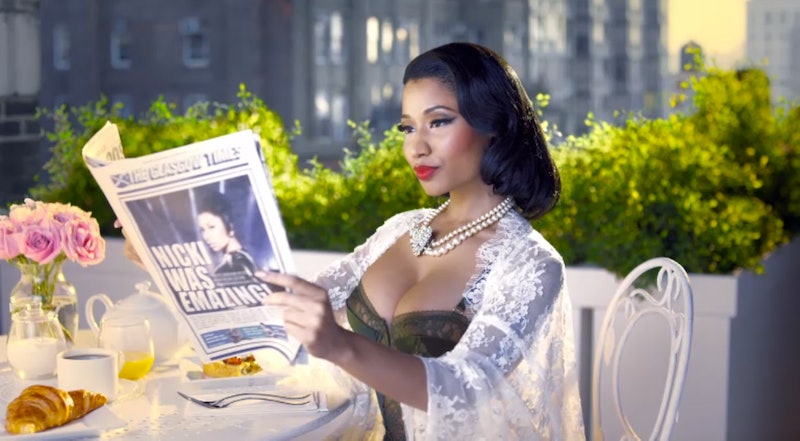 When I watched Nicki Minaj's promo for her appearance at the 2014 MTV European Music Awards, I was expecting some subliminal messaging. After all, the video opens with the rapper reading a newspaper with her face on it after her performance at the EMAs. That's really the tamest part of Minaj's MTV EMAs promo, because from there her domination goes from normal to, well, feverish. To be fair, the response was feverish when the world became aware that Minaj was hosting the EMAs to begin with, but there's a difference between a series of ecstatic tweets and news articles and, say, "Anaconda" being turned into an opera. Which is exactly what happens in this promo.

As impressed as I was with the exact level of Minaj's takeover, I couldn't help but think it still kind of pales in comparison to, say, Beyoncé's. Beyoncé might not have her own video game like Kim Kardashian does, but we all still generally agree that she runs the world. Thankfully, there's no need to put the two women in some kind of competition for the title of boss because they're good friends who just performed the "Flawless" remix together — which means that Beyoncé can give Minaj some tips on how to stage a true world take over. With these bonus tips, it won't be long before people are complimenting Minaj on allowing MTV to have an awards ceremony before her concert, like some fans did to Beyoncé after the MTV VMAs.

1. You need your own college course.

Not only is Beyoncé's father teaching his own college course on how to become her, but Beyoncé is also being studied at Rutgers and at Harvard. The furthest Minaj goes in this direction is having her own book. Clearly, what she needs is her own textbook for people to pick up on their way to Her Anaconda Don't 101.

2. You need your own vaguely blasphemous nickname.

"Beysus" anyone? Or am I the only one who still calls her that? Maybe instead of trying to work her name into some kind of religious connotation (Nisus? Minajsus? Nickianity?) then she should just pull a Matthew McConaughey and turn her name into a symbolic movement. Minajaissance?

3. Make your concert almost as long as the awards show itself.

If you're going to rock the EMAs, then you should really rock the EMAs. Play a concert that's so long that late viewers are confused about whether or not they're on the right channel. After all, isn't Minaj supposed to be hosting and not performing for two hours? I'm pretty sure her Anaconda do, which would make the headlines for sure.

Check out the promo below.