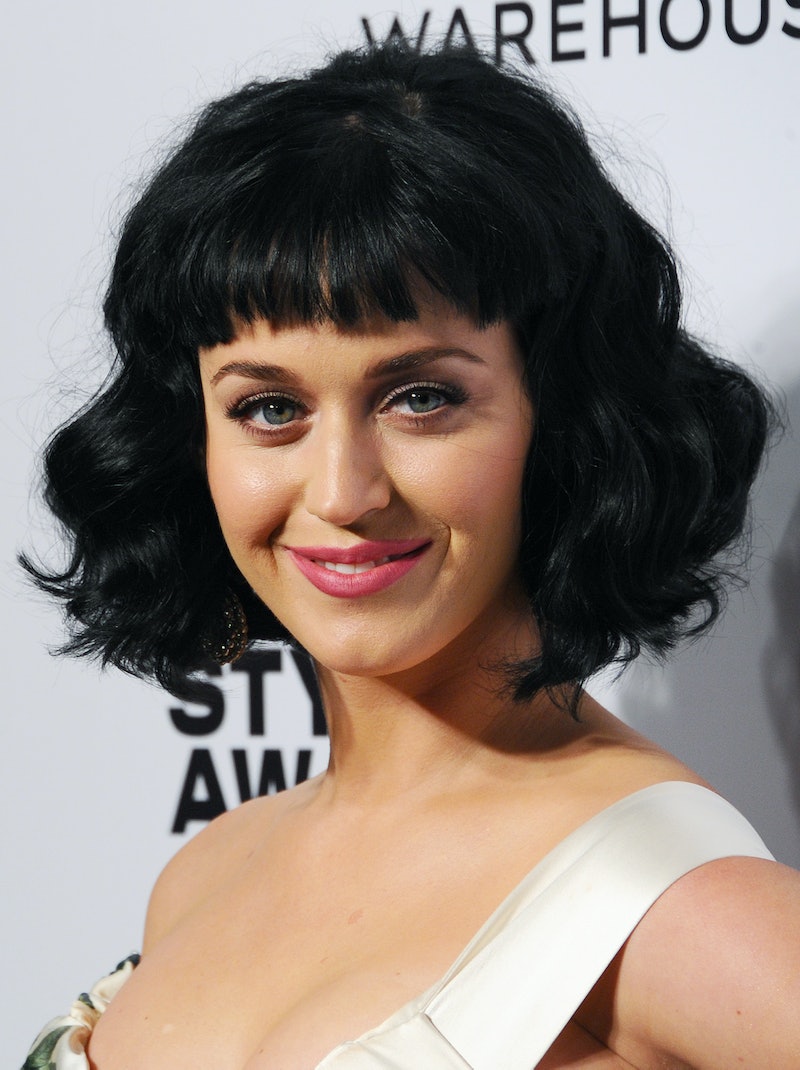 Second only to appropriating symbols from other cultures, Katy Perry’s favorite thing to do is clearly winking. Hither and thither, the many-wigged maiden winks all the live-long day. I repeat: Katy Perry literally winks like, all the time. Either she’s constantly getting dirt in her eyes, or she fancies it her cute little trademark. Iunno. Could be a little from column A and a little from column B.

Perhaps, she winked a long time ago at a party once and got fantastic feedback. I’m imagining the scene like this: Perry delivered a choice innuendo that may have had something to do with a phallic-looking fruit. Hyper-aware of her own brilliant ribaldry, she thought to take the quip an inch further with a suggestive wink. This slayed the crowd. A foppish dandy in full 18th Century French regalia remarked “How droll!” Then, a lady in a Marie Antoinette-style wig, piped up “Lady Katherine must attend all of our pahhhh-ties!” Basking in the warm glow of social approval, Perry thought “People LOVE when you close only one eye... I must wink my way to international stardom!" And wink she did.

The first few times it was like "Meh, ok. This girl think’s she’s cute." But it became quickly became obnoxious, as gimmicks always do. So, without further dallying, here are all of Katy Perry’s winks, ranked from tolerable to UUUUUUGHHHH!!

This one is far less spasmodic and self-conscious than some of Perry's other winks. It gets a place of honor as the most tolerable wink of the bunch for seeming the least inauthentic.

9. The Old School Katy "I Kissed a Girl" Wink

Annoying, yes, bet at this point, it wasn't a pattern. Because this could have been mistaken for a one-off instance of questionable judgment, we can let this one slide.

8. The "I totally banged a dude" wink

This one is slightly more necessary than the others, so I'll give it some amnesty on the continuum of lame.

7. The "Waking Up in Vegas" Conspiratorial Wink

She's your partner in crime...

6. The "I have boobs, and just got my nails done" wink

GUUHHHH, KATY! It's not fun anymore!

5. Katy Perry Winks at Niall Horan at the 2014 Brit Awards

Don't pretend like you guys are actually friends, Katy.

Maybe the mascara is just drying on one of her eyes.

Here, winking indicates taking down the patriarchal institution with a sense of humor, while leaving your corset on. Oh, and buying her perfume.

2. The "California Girls" Wink AKA, "I'm Not Wearing Any Underweeeear"

Clearly, this wink has a baby voice.

This wink is one that indicates total obliviousness. It says "Check out my cool grillz! Aren't they edgy?" Naturally, this outs Katy Perry for the person you'd imagine she'd be: the hip variation of the girl at the party that you wish you hadn't started a conversation with.

Let this be a lesson to all ye suggestive winkers: wink responsibly.