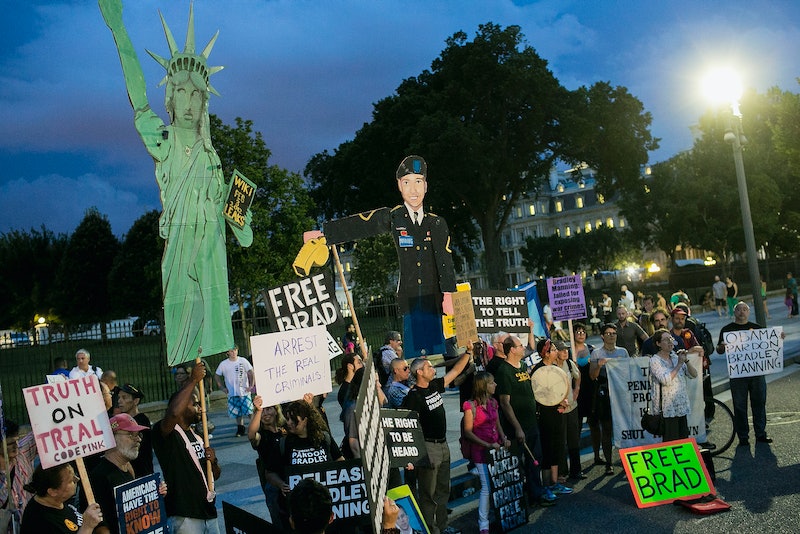 Chelsea Manning, the army private convicted of passing hundreds of thousands of classified government documents to Julian Assange, is now looking for a presidential pardon.

On Wednesday, the Pvt. Manning Support Network released documents filed with the Justice Department by Manning's attorney David Coombs. In the documents, Manning requested a pardon and commutation of her sentence.

"The decisions I made in 2010 were made out of a concern for my country and the world that we live in," Manning wrote in her request. Groups supporting Manning, including Amnesty International, have previously called on the president to commute Manning's sentence based on her alleged good intentions when she leaked documents.

Manning, who was previously known as Bradley Manning, faces a 35-year sentence in Fort Leavenworth, Kansas for her crimes, which include a conviction for espionage. Shortly after her sentencing Manning announced her intention to live the rest of her life as a woman. The transition will require hormone therapy, a service Fort Leavenworth has said that it does not provide.

Manning's lawyer contends that many of the classified documents that were leaked to Julian Assange, and later published on WikiLeaks, did not actually need to be classified.

During her sentencing hearing, Manning apologized to those who were hurt by her actions, which included leaking a video showing a U.S. helicopter attack in Iraq that killed civilians. She also asked the judge to give her a sentence that would leave her enough time to start a new life and mend relationships with family members once she was released.

Barring a victorious appeal or presidential pardon, her earliest possible parole would come up in seven years.

According to her lawyer, Manning is currently going through the three week indoctrination process at Fort Leavenworth, which serves as a type of orientation for new inmates.

More like this
5 Ways To Stand In Solidarity With Women In America From The UK
By Sophie McEvoy
How To Fight For Reproductive Rights, Based On How Much Time You Have
By Courtney Young
Boris Johnson’s Leadership Is In Question – Again
By Bustle UK
How A Political Staffer’s Death Became The Center Of Alt-Right Conspiracy Theories
By Gretchen Smail
Get Even More From Bustle — Sign Up For The Newsletter