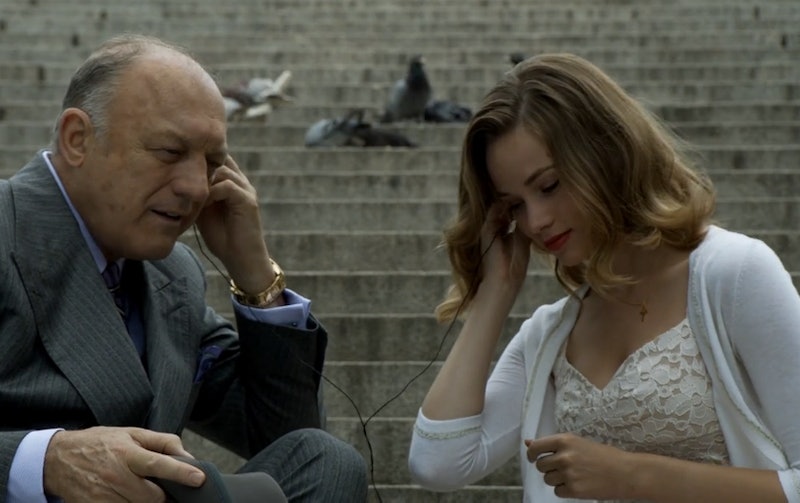 Who knew that a powerful man like Falcone had such serious Mommy issues? Apparently, Fish Mooney did, which is the only possible explanation for the bizarre plan that she set in place for the mobster. On last Monday's episode of Gotham , titled "Viper," we saw Mooney teach her new protege, Liza, how to sing a specific aria and speak in a "motherly" voice. It wasn't until the end of the episode — after Mooney completely revamped Liza's look — that we realized essentially, Mooney had set Liza up to be Falcone's mother. It might be the creepiest thing to happen on Gotham yet, and I'm including the whole "go for the eyes" thing.

Mooney clearly has an endgame for Falcone, and Liza is a big part of it. Mooney never explicitly states what she wants with Falcone, or why having Liza act as his mother will get her there, but there are little hints that suggest Liza is using Falcone's "Mommy" to manipulate him into giving Mooney what she wants. The biggest hint was Mooney forcing Liza into practicing her best "I'm so disappointed in you" face — something apparently every mother needs to master if she wants to guilt her children into better behavior. All signs point to Mooney using Liza as a pawn to get under Falcone's skin — and I have a theory as to what she might want Liza to do.

Liza behaving as Falcone's mother is particularly revealing. Mooney could have easily set Liza up to seduce Falcone — it would be easier and much less weird — but the mother figure goes deeper. Falcone may not have much respect for the women he dates — he's a powerful man likely used to being catered to — but the one woman he respects above the rest is his mother. After all, Mooney could have turned Liza into anyone — his sister, his first love, his dead wife — but his mother holds a particular value to Falcone. Now the question is, what does Mooney plan having Liza do with this role?

Mooney needs power if she wants to overtake Falcone, and Liza as Falcone's mother figure can help her get it. It's unclear whether Falcone will develop a sexual or romantic relationship with Liza (excuse me while I vomit at that thought), but it does seem that Mooney is setting her up to be his adviser. Why else would Mooney have Liza practice that disappointment face if not so she could use it to be "disappointed" by Falcone's actions that don't benefit Mooney? Perhaps Mooney will have Liza act as Falcone's right hand woman — girlfriend or not — and feed Mooney hints about what he's doing behind her back.

Falcone clearly doesn't trust Mooney anymore, and Mooney hasn't trusted Falcone basically ever. These two are bound to play games behind one another's backs, only Falcone is at a disadvantage because he's now blinded by affection for this new mother figure in his life. Ultimately, it's a pretty genius move on Mooney's part — even if it creeps me out to no end.