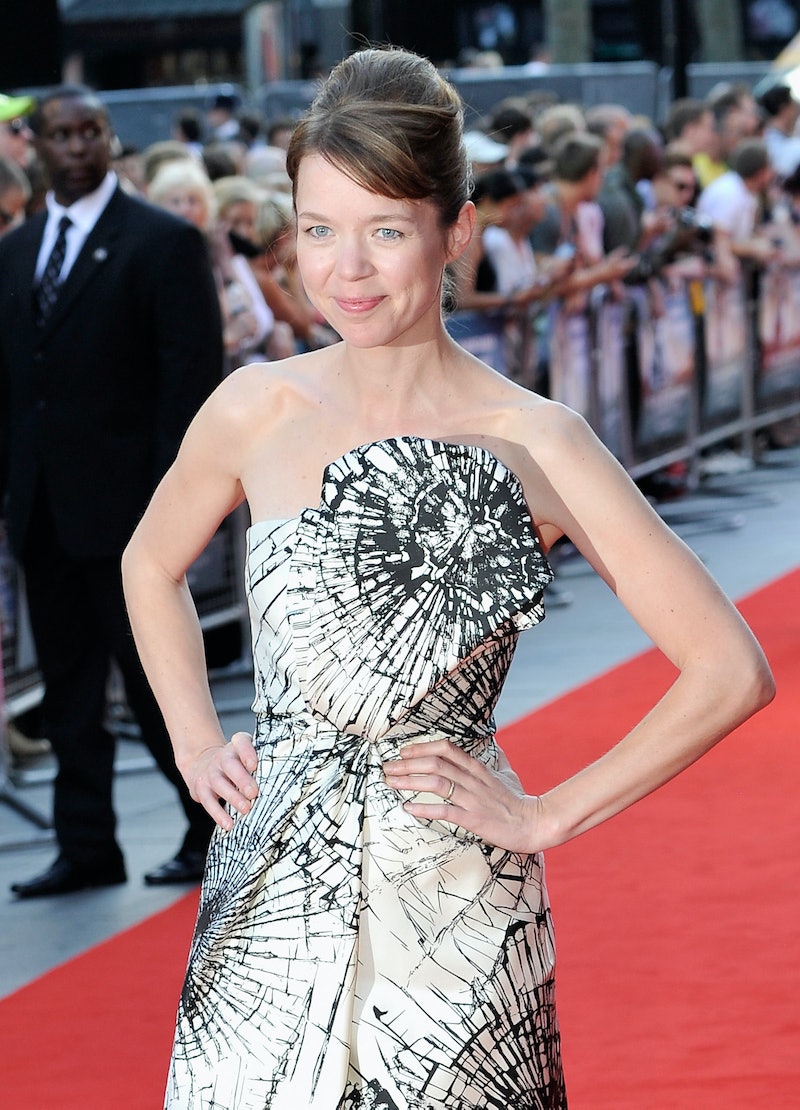 I know you want your Mr. Darcy with a little murder mystery on the side. Who doesn't? No, I am not talking about How to Get Away With Murder. I am talking about Death Comes to Pemberley. The mini-series adaptation of P.D. James' novel by the same name will air on PBS this Sunday and has a fantastic cast. There's the dreamy Matthew Rhys from The Americans. There's the ultimate object of my jealousy, Jenna-Louise Coleman, currently starring on Doctor Who and currently dating Richard Madden aka Rob Stark. (That girl has everything! Spread some luck around!) Death Comes to Pemberley centers on the afterlife (no, not that kind of afterlife) of our favorite characters from Jane Austen's Pride and Prejudice as their lives take a dark turn. So, who is our Lizzy Bennet in this "ever after"? Elizabeth Bennet is played by an actress named Anna Maxwell-Martin.

Do you recognize her? Unless you live in England or love watching British dramas on Netflix, it's not likely that you do. She had a small role in the Oscar-nominated film Philomena but there's not much else that American audiences would recognize. However, like many of her peers, she is well-versed in period pieces. I think there must be a certain amount of period dramas that English actors and actresses are required to fill in their career — a corset quota. That said, here's where British film-loving folks might have seen her:

In the Anne Hathaway Austen biopic, Maxwell-Martin played Cassandra Austen, Jane's sister. I'm a little shallow and I mostly just remember that James MacAvoy was in that movie. (Looks like I'm due for a re-watch!) However, Austen's sister Cassandra inspired many of Jane Austen's characters, including Jane Bennett. It will be interesting to see what the actress takes from that experience and applies to playing one of Jane Austen's less-understated heroines.

What's on the Telly?

Anna Maxwell-Martin is one of the four stars of The Bletchley Circle , which Netflix really wants me to see. It's always popping up in my suggestions. It's about #GirlsWhoCode — seriously! Well, four women who solve mysteries using they skills they learned in WWII as code breakers. Still pretty cool. The Death Comes to Pemberley star plays Susan Gray, a housewife by day. Maxwell-Martin is also the star of the BBC's Bleak House (for which she won a BAFTA) and appeared in North & South with Richard Armitage from The Hobbit. The actress won her second BAFTA for the television movie Poppy Shakespeare in which she starred alongside Naomie Harris.

Anna Maxwell-Martin is most familiar to theatre-goers in the United Kingdom. She has been on stage in London since 2001, including West End Musicals and plays at the National Theatre. Some of her most memorable roles include Lyra in the stage adaptation of Phillip Pullman's His Dark Materials, Regan in King Lear and Irina in Chekov's Three Sisters. She played Sally Bowles in Cabaret (clip above), the role Emma Stone will soon be taking up on Broadway.