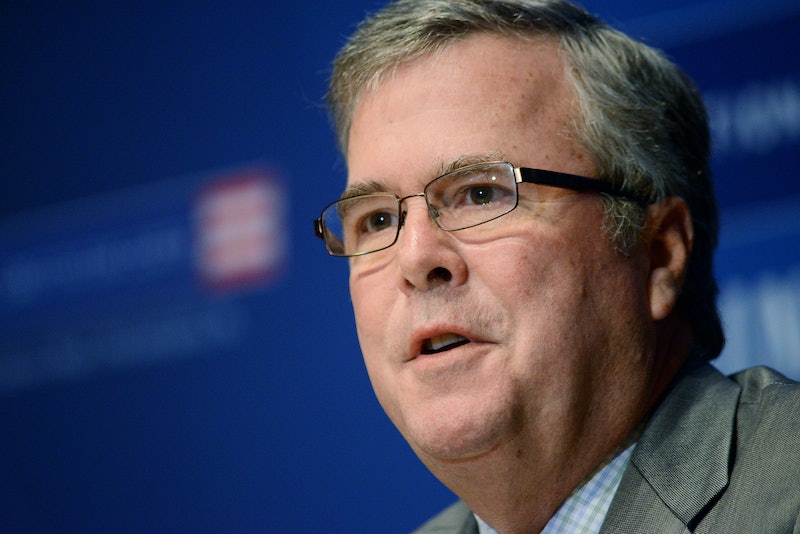 So, who among the Republicans is going to step up in 2016? With all the anticipation that's been swirling around the likely presidential candidacy of Hillary Clinton over the last several months, it's easy to lose sight of what the GOP is up to, and who's likely to rise to the forefront. But now, there's news that at least one Republican establishment heavyweight may be mulling over the big decision — according to his son, former Florida Governor Jeb Bush is "more than likely" considering a presidential run in 2016.

If he ultimately does decide to run, it could be a fascinating case study, both as an indicator of whether the national Republican Party craves center-right conservatism or hard-right, and whether the American public is willing to seriously consider a third member of the Bush family for the nation's highest office.

The news comes from an interview between ABC News' Jonathan Karl, and Jeb's eldest son, George P. Bush, himself currently locked in a race to become Texas land commissioner. In simplest terms, it seems like the Bush family is far from done with major party politics, and one of them could be returning to the national stage very soon. As the younger Bush told Karl, he wouldn't always have believed his father would actually run, but that's changed in recent months.

It's more than likely that he's giving this a serious thought ... That he'll run. If you had asked me a few years back, I would have said it was less likely. ... The family will be behind him 100 percent.

There's obviously no telling just yet how the GOP presidential field is going to shake out — figures like Louisiana Governor Bobby Jindal, Senators Rand Paul and Ted Cruz, and former Texas Governor Rick Perry are all considered possible entrants, among others — but if you add Jeb Bush's name to the field, traditional, establishment Republicanism would have a high-profile representative in the mix.

Bush has long been considered a moderating force for the Republican Party at the national level, especially on issues of immigration, which they've basically been catastrophic at addressing since their awful loss on election night 2012. And that would certainly be true standing were he on a primary debate stage across from a Tea Party-powered opponent like Cruz.

Of course, there could be some pitfalls as well. Moderation is no guarantee of electoral success, and there's always the risk that Republican voters, or the American public writ large, get fatigued at the idea of yet another Bush presidency. The American system isn't supposed to be dynastic, after all, and whatever challenges Hillary might face thanks to her familiar last name, they're bound to be doubly-true for Bush — the GOP hasn't elected a non-Bush to the White House since Ronald Reagan in 1984, a full 30 years ago.