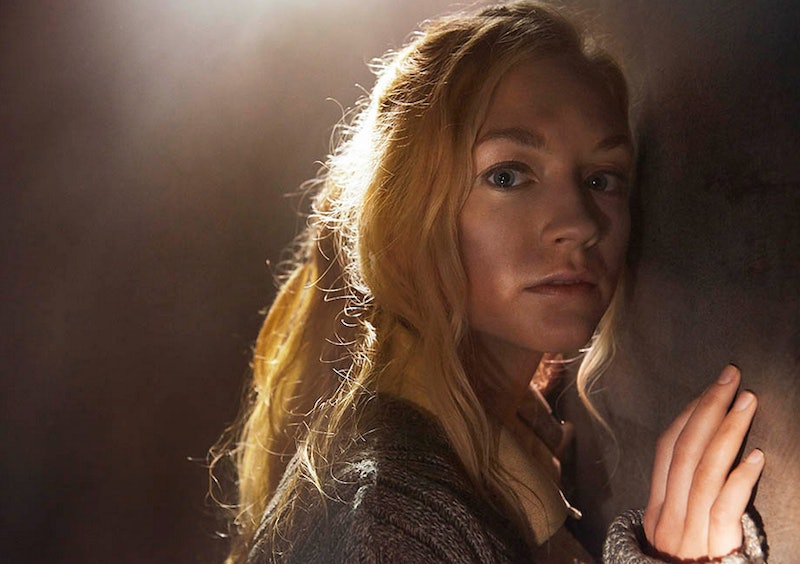 The Walking Dead fans have it tough. Just when we get answers to one mystery in AMC's zombie series, ten more pop up right at the last second. That's exactly what happened in episode three, which saw its fair share of heartbreak when Bob met a sad end thanks to a zombie bite-cannibal barbecue combo, and Maggie and Glenn taking off with Abraham, Rosita, and Eugene on the bus to Washington D.C. Although Daryl and Carol, who we last saw in the second episode when they were running after the car that kidnapped Beth in Season 4, were nowhere to be found, Daryl arrived at the very end with a mystery person. Did Daryl find Beth? Was he with Carol?

The whereabouts of Beth Greene have been a hot topic since the new season began, but thanks to the trailer aired at Comic Con, we know she’s somewhere in a hospital-esque location, killing walkers and running for her life. It seems that next week we’ll finally get the answer to where she’s been all this time. While no one can be sure, I think Daryl rolled up to Casa de Father Gabriel with Beth in tow given his über happy facial expression (well, as ‘über happy’ as Daryl can possibly be, that is), which is great, but puts Carol’s fate up for grabs. Let me just say, if Carol dies, I'll be staring at my TV like:

As with any big Walking Dead plot point, crazy rumors have been running wild on the web, with everything from Beth turning into a zombie to Carol getting run over by a car (like really? REALLY?).

The mystery of Beth Greene is still just that, but fingers crossed Daryl has both of them with him. Either way, next week’s episode is definitely going to be strange.