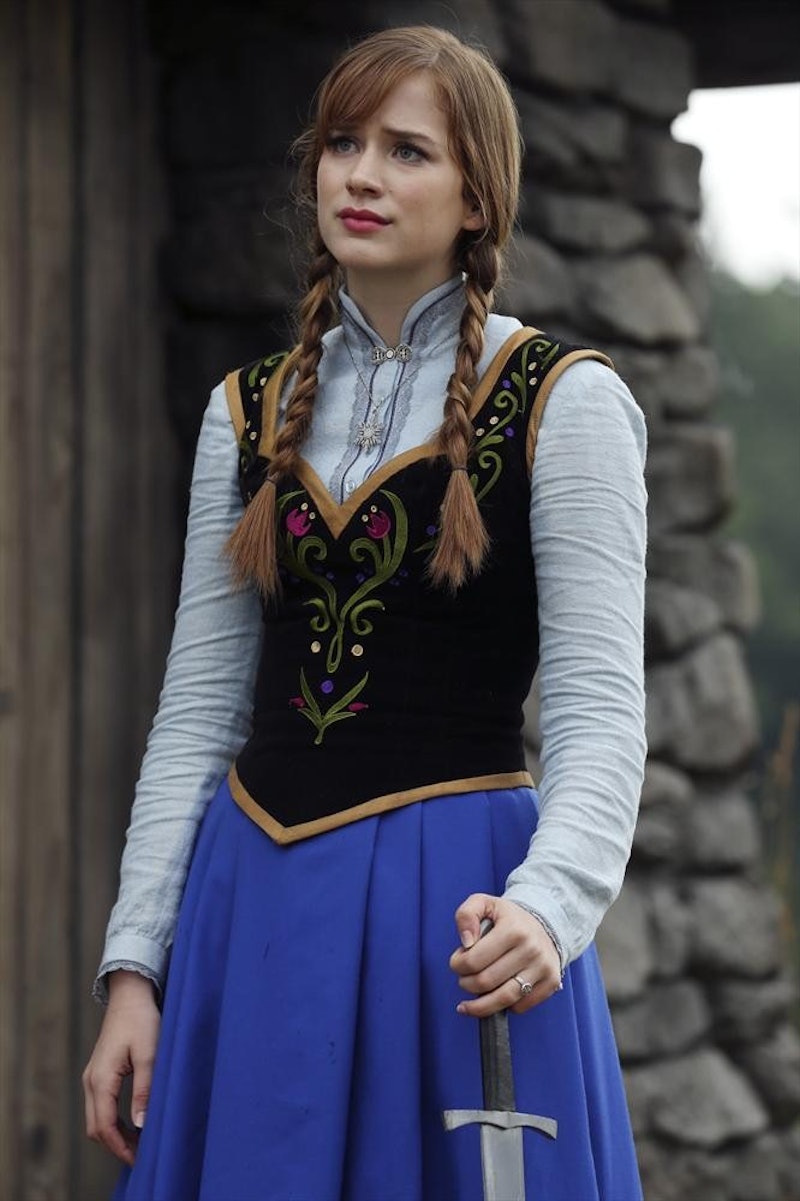 What a tangled web Once Upon A Time weaves, one that's only getting more and more tangled in Season 4. Over the past few seasons, this series has gone out of its way to make connections where fairytale and Disney fans never dreamed them to be possible (cough, Peter Pan is Rumplestiltskin's dad, cough). And on Sunday night, OUAT revealed that The Snow Queen was Emma's foster mom, after leading fans around for weeks trying to figure out how the pair knew one another. Well, in the promo for next Sunday's episode of OUAT, "Family Business," the series revealed that Belle and Frozen 's Anna also know each other. And so, the plot thickens.

Of course, I doubt that Belle and Anna's relationship runs as deeply as, say, Prince Charming and Kristoff's friendship — which apparently exists because all men in the Enchanted Forest and surrounding realms are a part of some big fraternity. But there's definitely a reason why Belle's helping Anna get a head-start on wherever she's running to in next Sunday's episode. Because that's what Belle does for Rumplestiltskin's prisoners, right?

Last Sunday, the series established that Rumple was going to hold Anna as his prisoner for failing to complete the task he'd set her on. But what it didn't establish was whether or not Anna's visit to Rumple's castle happened around the same time that Belle was living there with him and helping to prevent him from being a terrible monster. Well, the promo for "Family Business" opened up the mystery of Anna's location even further because, apparently, Belle was living in the castle and she helped Anna escape. Well, at least she tried to — the promo ends with Anna falling over the side of a cliff. Not really the best scenario.

None of this should surprise you, astute OUAT fan. Because you haven't forgotten, I'm sure, that Belle helped Robin Hood escape from being Rumple's prisoner way back when as well. Belle is Rumple's moral compass and, beginning with Robin Hood's release, she keeps her now-husband from being a raging maniac. So, obviously, she wasn't going to let him imprison a young girl for the rest of her life.

Of course, I was shaking my head when the promo revealed that yet another pair of OUAT characters knew each other. But this situation actually makes perfect sense, is totally predictable, and is, actually, a tale as old as time as far as Belle's interactions with Rumple's prisoners go. Bravo, OUAT, for finally making a connection that actually makes sense.