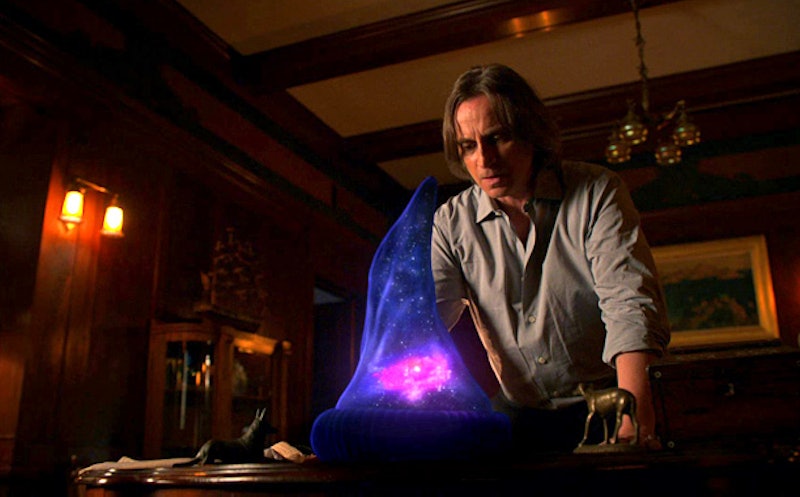 As much as I've been enjoying the Once Upon a Time Frozen arc, I have to admit that the storyline I've found most intriguing has nothing to do with our cool new gang of friends (at least for the moment). Rumpelstiltskin found a wizard's hat in the OUAT Season 4 premiere, which just so happened to be on located in the very same mansion Belle and Rumpel were vacationing in during their honeymoon. (What are the odds?!?!) Naturally, fans jumped at the thought of a Fantasia crossover and left many people wondering who exactly the sorcerer and his apprentice could be — and, more importantly, what it will mean for the rest of the season. But given that Sunday night's episode of OUAT is titled "The Apprentice," chances are the series is finally going to pull some answers (rather than questions) out of that Mickey Mouse-like hat.

According to the OUAT synopsis, "The Apprentice" will find Rumpel via flashback as he enlists Anna to acquire a magical box that the Sorcerer's apprentice is guarding. Hmm, a magical box that Rumpel covets… why does that sound so familiar? Perhaps because it's the same box that unleashed a star-encrested hat with a wave of the Dark One's dagger.

So what exactly does this tell us? Well, since there are a lot of theories floating around out there, it at least helps us narrow quite a few of them down. For starters…

Rumpelstiltskin Is Not the Sorcerer's Apprentice

I mean, I'm no detective or anything (or am I?), but if Rumpel is hoping to steal something from the sorcerer's apprentice, then chances are he's probably not the sorcerer's apprentice. (Or we're about to witness the easiest heist in history.) I gotta say, I'm a little surprised. I really thought we'd get to see the usual teacher of magic become the student for a change.

The Apprentice & Sorcerer Will Be Unknowns

Executive producer Edward Kitsis confirmed to Entertainment Weekly that the hat belongs to someone we've never seen before on the show. Technically, that may only include the sorcerer in this particular equation, but I'm thinking that if the apprentice was someone that we knew, then Rumpel would be comfortable enough trying to retrieve the box on his own without the help of Anna. The only person to rival Rumpel's magical abilities in the Enchanted Forest is the Evil Queen, and as we all know, Rumpel was her teacher. So by process of elimination, that just leaves us with a person we're not already familiar with. If I'm wrong, I'll take you all to Granny's diner — my treat.

Hopefully this wouldn't be as confusing as it sounds. The way I see it, we're going to flashback to Rumpel and Anna's first encounter, where he'll make a deal to help her find answers to Elsa's background in exchange for retrieving the magic box. Which, OK, that makes sense. The confusion starts when we take into account the fact that Brad Dourif, who played Zoso (the Dark One before Rumpel) is scheduled to appear in the episode as well. If you recall, Rumpel killed Zoso, which in turn made him become the new Dark One. So since we know Rumpel is already the Dark One when he meets Anna, that would make it impossible for us to see Zoso since he'd be long dead at that point. Right?

That is, unless we get a flashback within a flashback, which could possibly help shed some insight on the box's actual history — like say if Zoso ever crossed paths with the Sorcerer. Though, this is OUAT we're talking about, so maybe looking at this logically isn't the best way to go. Maybe he returns as a ghost that's doomed to protect the box at all costs as penance for all the evil things he did as the Dark One. Or perhaps the Sorcerer found him dying in the woods, healed him, and made Zoso his apprentice. Anything is possible with this show. Or he may have just been reincarnated and this is actually going to turn into a Lord of the Rings crossover instead (which I would be totally fine with BTW).

Merlin Could Be the Sorcerer

Though I'm leaning more toward Fantasia's Yen Sid, having the sorcerer be Merlin is definitely not out of the realm of possibility. Especially since TVLine reports that the episode will feature "an elderly, grizzled and unflappable knight who for many, many years has dedicated himself to serving a righteous cause." Knights? Righteous causes? Like TVLine's Michael Ausiello said, that sounds an awful lot like a Holy Grail scenario. But if Merlin really is the sorcerer, would that make King Arthur the apprentice?

The Sorcerer Is the Author of Henry's Storybook

Granted, this is still just a theory that's been circulating, but if you ask me, it's a pretty darn good one. Regina first mentioned the book during the premiere — right around the same time Rumpel discovered the hat, mind you — in the hope of tracking down the author of Henry's storybook, so she could demand a happy ending. That seems like a pretty random reason to suddenly bring up this book again, unless there's more to this story than meets the eye. And having the author be the owner of that magical hat would be a great way to intertwine these two story arcs and make this season quite the page turner in and of itself.