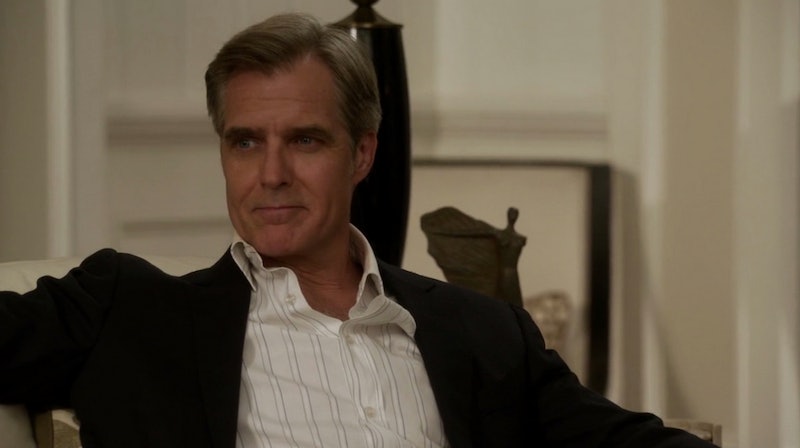 Can someone just answer this question already and get it over with? Last Sunday, Revenge revealed that Conrad Grayson is dead — or rather, the CIA told David Clarke that Conrad was dead. But, apparently, that might not be the whole truth. On Sunday night's new episode, "Repercussions," Jack's police department BFF, Ben, wanted to reopen the case of Conrad's death because, surprise, it wasn't investigated throughly. Season 4's fifth episode ended with the police chief telling Ben not to open the case and Revenge hinted that Conrad Grayson is alive. Dun, dun, dun.

I mean, we all saw this coming, right? We went all of this time thinking that David Clarke was dead only for him to turn up, very much alive, in the Season 3 finale. AND, on Sunday night, when Jack dismissed Ben's questions about Conrad's death, saying that it happened in "justice," I knew Revenge fans were in for another ride. And, so, here we are with the question staring us in the face yet again: Is Conrad Grayson alive or dead?

As someone who's stuck by Revenge through the years — through all of it's best and worst twists and turns — my self-declared expert opinion is that Conrad is alive. Because Sunday night's "Repercussions" provided us will absolutely all of the evidence we needed to make that decision about the Grayson patriarch's fate. I mean, in one episode Revenge dropped more hints than it ever did about David Clarke possibly being alive.

First, there's the fact that Ben even became interested in this case — sure, he's trying to move up the ladder, but he's Jack's friend and this man killed his family, why would he care about this? And then there's the fact that the chief told Ben that nothing good would come from reopening the Conrad Grayson case. Why? I mean, wouldn't they want to put this crazy killer that stabbed this man and left him for dead behind bars? I feel like people who devote their lives to serve and protect kind of owe that to the community, right? You don't have to answer, I know I'm right.

There's definitely something off about the fact that this case wasn't properly and thoroughly investigated, but there was something more off about the chief really not wanting Ben digging up this case. Conrad's alive and the most hated man in Revenge's America — this could potentially be the biggest cover-up on the series. Sorry, David Clarke.