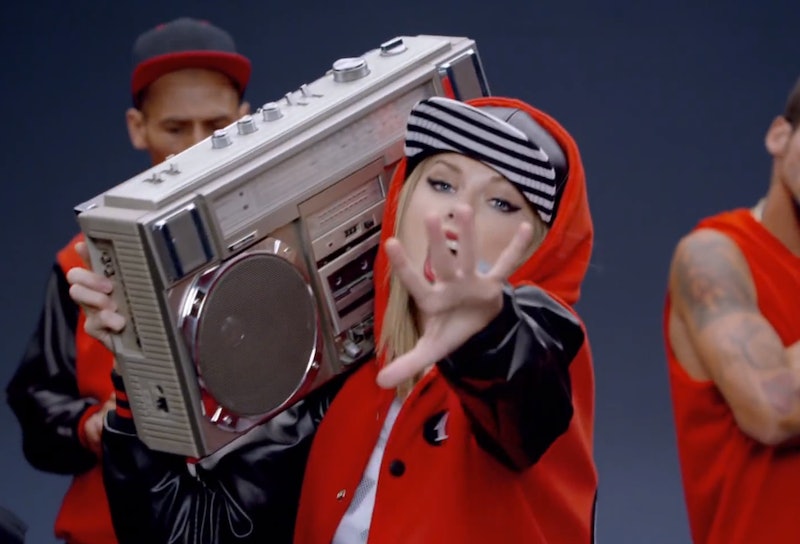 If you're a Taylor Swift hater, then you might want to find a nice cave to hide in on Monday, October 27, because her new album has finally arrived and I can guarantee you that it is all that people will be talking about all day. It's all I want to talk about all day. I have listened to no other music all morning. The hype surrounding the eventual release of 1989 was so high that it seemed like there was no way the pop star could meet our expectations — so she didn't. She exceeded them. However, now that the album is out on iTunes, those who don't want to pay for it might be asking the question that will surely soon haunt us all. When is 1989 coming to Spotify?

Like Pandora, Spotify is a music streaming website that allows you to enjoy all your favorite songs without necessarily having to pay for a subscription to the website. However, unlike Pandora, Spotify allows you to listen to playlists for everything from "Katy Perry songs" to "Music to Drive to" to full albums from your favorite artists. However, Spotify is way, way behind the times with 1989. Oh, they have "Shake It Off" just like the rest of the world, but there has been no sign of "Out of the Woods" or "Welcome to New York" on the website/app yet — even though both songs have been out for a week or more.

1989 hasn't made its way there yet either, but when should you expect to see it? The answer to that is a little more complicated than it being available on iTunes. According to the Spotify forums, the website gets new music when they're cleared for it rather than when the new music is released. There's no specific time frame after an album's release that you can expect it on Spotify. It essentially boils down to when they get permission from the artist/record company to stream it. However, we might have spoiled our chances of getting it already by being too eager to hear it.

If you happened to be on the Internet on Friday, October 26, you might have been one of the people who were ecstatic that 1989 leaked early despite the ire that you earned from Swift's fans for listening to it. There were some people who worried that the leak would hurt the album sales — something that doesn't seem to be coming true so far — but it would probably be bad business to give the all-clear for a website to stream the album for free when it was already leaked ahead of time. They have to make up those sales somehow, right? That means 1989's debut on Spotify could be days or even a week behind the iTunes release.

Of course, we might still get lucky. Swift has been wanting to get this album out to the world for so long that she might give her people the order to hand it over to Spotify for her poor listeners now, now, now. However, the fact that "Out of the Woods" and "Welcome to New York" aren't on Spotify yet might be all the proof we need that the wait for the full 1989 album is going to be a while for users of the music streaming site. You'd better start saving up your money.