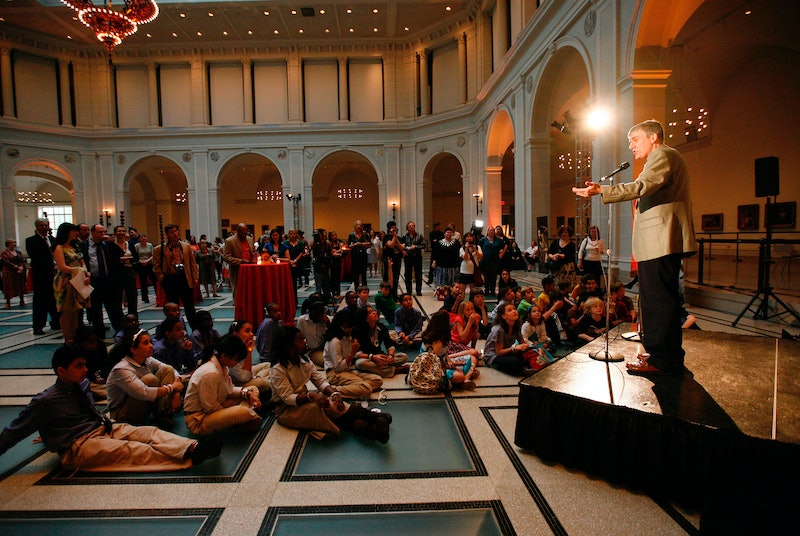 I'm unclear why The New Yorker’s Rebecca Mead deemed it necessary to brandish her literary pitchfork at Rick Riordan’s beloved Percy Jackson series in last week's article "The Percy Jackson Problem." In writing about how she believes the children's series provides no benefit to children as it isn't highbrow enough, Mead revisits the literary value debate between Neil “at-least-they’re-reading” Gaiman and Tim “E. L. James-won’t-lead-you-to-Shakespeare” Parks. While Gaiman insists that it doesn't really matter what kids are reading as long as they're taking that first step, Parks says it's better to start with Romeo and Juliet in order to avoid becoming complacent with hackneyed literary formulas.

Mead’s tastes lean towards Parks’ camp, and their dual denouncement of "easy pleasure" reading smacks of elitism and oversimplification. But the conventional takeaway from Gaiman's opposing viewpoint — that less critically acclaimed books are beneficial to kids only because they act as a “gateway drug to reading” — is slightly flawed as well, since it overlooks the inherent value of the type of literature that Mead labels a “problem.”

Saying that the Percy Jackson series is tolerable only if it propels kids to pick up D’Aulaires’ Book of Greek Myths is like saying that playing sports is only important if you plan on becoming an Olympic athlete. What about general fitness, sportsmanship, and team camaraderie? These are skills and traits that can—and should—be learned from recreational athletics of all levels. In much the same way, Rick Riordan’s series aims to channel the moral and psychological lessons learned from the Greek myths of yore, rather than merely fixating on “facts” and figures.

If I am an athletic coach, I am expected not only to relay to my players the fundamentals of the game, but also to inculcate how to be a mensch. (But don’t take it from me — philosopher and Noble Prize-winner Albert Camus once said, “After many years during which I saw many things, what I know most surely about morality and the duty of man I owe to sport.”) Sometimes we can learn these lessons only from lower-level play, because as one climbs the athletic ladder of achievement, it becomes less about interpersonal relations and more about personal athletic prowess. Or at least, those lessons are a lot more muddled. And here’s where Percy Jackson & co. enter the ring.

According to a recent scientific study, the genre godfather to Percy Jackson Harry Potter Series can help instill empathy in young (and open-minded) readers. J. K. Rowling’s carefully crafted world of wizards and magic reflects real-world problems and prejudices, preaching tolerance and the celebration of minorities. It doesn’t matter that these allegories are thinly-veiled, that Voldemort is easily identifiable as “Hitler in a cloak,” because it gets the message across just fine. And yet Mead has the gall to refer to the Harry Potter series as “notorious.”

Similarly, Percy Jackson can have a hand in molding kids — and non-jaded adults — into tolerant, curious, and socially attuned human beings, too. Doing so through the characters of Greek mythology is certainly appropriate for particular themes, such as the complexity of families; as Riordan drolly puts it:

Families are messy. Immortal families are eternally messy. Sometimes the best we can do is to remind each other that we’re related for better or for worse … and try to keep the maiming and killing to a minimum.

If that doesn’t accurately describe just about every family in the known universe — whether on a metaphysical scale, a historical-religious scale, or a microcosmic scale — I don’t know what does.

Or perhaps consider the series’ approach to societal disabilities: In Percy’s world, most of his demigod friends have dyslexia and ADHD; according to the logic of the series, they have trouble making sense of English because their brains are “hard-wired for ancient Greek,” and their ADHD is a result of heightened senses that will save their lives in many battles. Something that serves as a point of humiliation for Percy in the mortal world ends up feeding into his greatest strengths in the world of Greek monsters and demons. Slipping this under the empathy microscope, it would take someone as shortsighted as a Cyclops to deny the real-life implications of de-stigmatizing such learning disabilities, and even celebrating them as difference.

But can such slang-infested, translucently plotted drivel like the Percy Jackson series still be considered valuable as literature? As novelist Jonathan Franzen wrote in his 2002 essay “Mr. Difficult,” there can be two models of how fiction relates to its audience: the Status model, which upholds the value of "great works of art," and the Contract model, in which the reader derives a "pleasurable experience" from the writer.

"High art" tends to favor labyrinthine language, the traversing of which (with Dictionary.com serving as Ariadne's string, as I learned from, yes, the Percy Jackson series) yields an intellectual reward. Some authors’ prose is just ethereally beautiful — think (or rather, feel) Marilynne Robinson’s Housekeeping and Gabriel García Márquez’s One Hundred Years of Solitude. Other writers, whose brilliant minds defy all rhyme or reason, compose works of genius that are only accessible to the brave souls who succeed in conquering impregnable, often fictitious language — I’m looking at you, James Joyce and Thomas Pynchon.

One Hundred Years of Solitude by Gabriel Garcia Marquez, $12.97, Amazon

It is this kind of “high art” that has its roots in the western canon, and it is this type of literature to which Mead tacitly alludes when she takes as a given the assumed superiority of traditional Greek mythology. “If kids are dressing up for Halloween as Apollo or Poseidon instead of Iron Man or a generic zombie,” Mead writes, “so much the better.” But why? Why exactly is it better?

Sidestepping the Pandora’s box (thanks again, Percy!) that contains the argument that the Western canon is only considered The Western Canon because it is made up of works written by dead white males, I believe that these ancient tales about make-believe gods and goddesses continue to survive and thrive — in all of their various incarnations — because we can learn life lessons from them, truths about ourselves and about the universe around us. As Neil Gaiman himself wrote in his comic book series (more pictures than words? The horror!) The Sandman: “Things need not have happened to be true. Tales and dreams are the shadow-truths that will endure when mere facts are dust and ashes, and forgot.”

David Foster Wallace once described densely lyrical literature as “candy for the soul.” I’m all for transcendent literary experiences, lifting us up to the highbrow realm of the Greek gods themselves. But it’s important not to dismiss the lessons we can learn from earth-bound demigods as well.