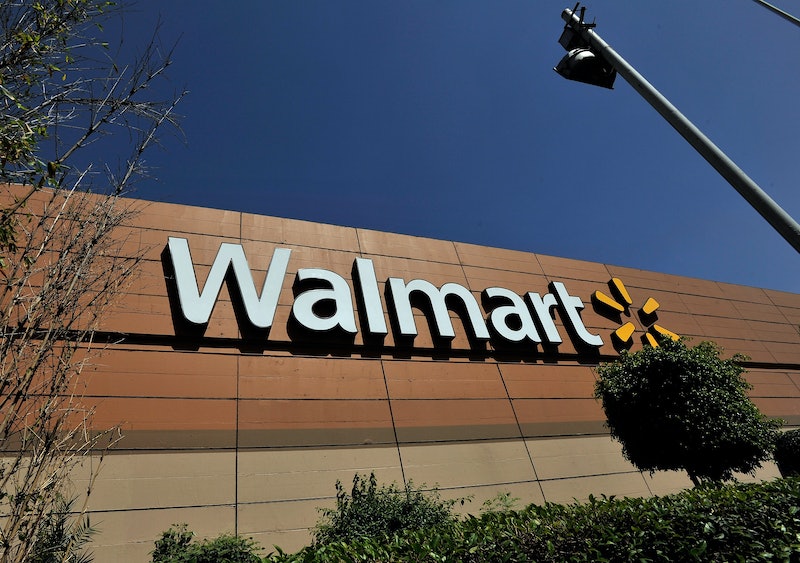 Well, this is just great. Walmart's website has a "fat girl costumes" section for anyone shopping for plus-size Halloween wear. And — as expected — people aren’t happy about it. Shoppers took their complaints to social media to let the brand know they weren’t OK with any store that would label their costumes with this description. Rightfully so.

Jezebel caught the giant retailer’s offensive error this morning after getting a tip from a shopper who was shocked by the category. AdWeek did their own investigation and found that the politically incorrect section was still live as of 10:30 a.m. EST. By the time I made my way to the website, I wasn't able to find it. Looks like someone finally caught the error. But, even with their quick attempt to change the description back to “plus-sized,” screenshots never go away. Oops.

But really — how does this happen? Did an irresponsible intern decide to make a statement on their last day on the job? Maybe an angry employee wanted to troll Walmart in an ill attempt to make what they thought was a joke? Most likely, though, it was a simple mixing up a hidden metadata field with a display field — after all, the URL is /fat-girl-costumes, too — though, really, "fat girl costumes" isn't a big search term, so it was a bad move either way.

Whatever the reason is, this is just another backwards step in politically incorrect Halloween costumes. What was once an innocent holiday to dress up as cheerleader Barbie and trick-or-treat around the neighborhood has turned into a festival of offensive costumes. From Native American headdresses to the somehow-still-prevalent use of blackface, people just don’t get it. If you think your costume might be a little offensive, don’t wear it. Period. And if you think your costume description in really offensive (*cough* Walmart), change it ASAP.

But, moving on from Halloween, “plus-sized” shouldn’t be considered an offensive term. It’s more relatable and real than “curvy” and certainly less offensive than “fat girl.” Halloween will be over in a few days, so it’s important for Walmart to understand this after all the costumes clear the 50 percent off rack. Like many brands, they sell plus-sized clothes year-round and certainly shouldn’t make that error again.

So, how is the retail giant responding to their slip-up? As of 11:15 EST, the official Walmart Twitter account hasn’t apologized for the error — which is something they should do ASAP. The whole controversy has been talked about on Twitter. People know what happened. It’s not enough to quietly fix it and move on. Maybe the Walmart PR team is crafting the perfect response. If so, it’ll be interesting to see what it says.

Look — Halloween is fun. It’s a great excuse to dress up and eat enough candy to never want to see a Reese’s pumpkin ever again (ha — yeah right.) But can we all agree to make the whole celebration a little less offensive? We should all agree to stop the fat shaming and politically incorrect costumes and just go back to eating caramel apples.

UPDATE: Walmart has apologized for the mistake, and is "working to ensure this never happens again."