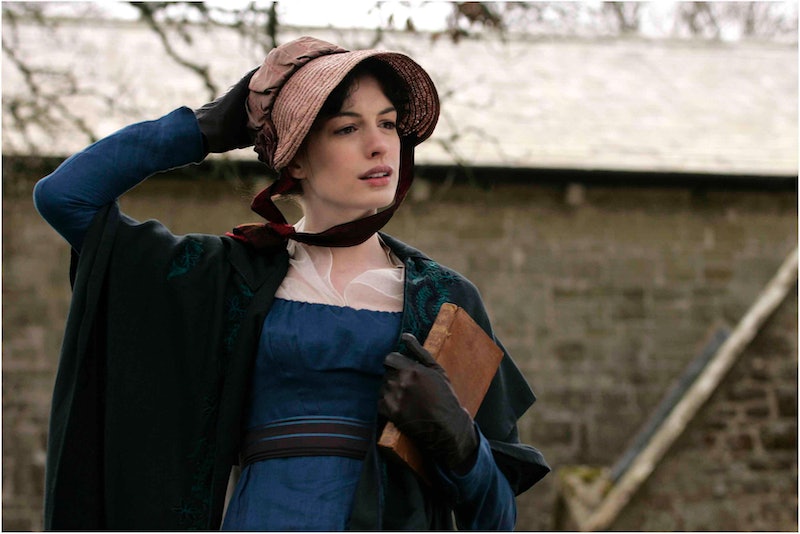 You know those on the fence moments — when you have to make a choice about something and desperately want to do the right thing, but can’t decide which alternative is best? The next time that happens, make it easy on yourself. Just ask: What Would Jane Do?

Yes, I’m talking about that Jane: Jane Austen, the woman who’s reputedly the most widely recognized literary figure today after Shakespeare. Austen has her own brand of fan fiction, she’ll soon be featured on the British £10 note, and her image and quotations grace every conceivable novelty item. (I own a Jane Austen action figure!) At times, it seems as though the world has gone Austen mad — and I’ll tell you why:

Jane Austen was a brilliant writer and an astute observer of human nature. One reason her works are so beloved and still resonate with readers today is that through the wit and elegance of her language, her clever storylines, and her recognizable characterizations, she teaches us important lessons about how to be the best people we can be. Her advice is thoughtful, wise, and timeless. By studying the choices her characters make, as well as the choices Jane Austen made in her own life, we can find a guide to help us navigate our own troubled waters. So the next time you’re in a quandary or just need a few sensible and uplifting thoughts to get you through the day, ponder these tips from Jane Austen:

1. Listen to your inner guide

How often do we cave in to pressure from family and friends to do something they think is in our best interests? Despite intense coercion from everyone at Mansfield Park (including the man she loved) to marry Henry Crawford, Fanny Price refused, because she knew they weren’t right for each other. Learn from Fanny’s example. The next time you are faced by a decision, big or small, don’t rely too heavily on the advice of others. Seek out counsel if you need it, but think for yourself. Only you know what is right for you. As Austen put it, “We have all a better guide in ourselves, if we would attend to it, than any other person can be.”

2. Discover your gifts and do what you love

Jane Austen lived at a time when few women were authors, and most novels were Gothic in nature, involving gloomy castles, locked rooms, violent events, and damsels in distress. As a mature writer, Austen bravely forged a new path, giving us the realistic novel: stories centered on familiar people who encountered the same social, emotional, and economical problems as her readers. It took guts, fortitude, and a huge investment of time to write those books, but thankfully they sold well and made the authoress happy and proud.

We only get one life. Are you sharing your awesomeness with the world? Austen, by example, reminds us how important it is to follow our bliss — to put in the effort and go get the good stuff. If you don’t try... well, I don't have to finish that thought for you.

This is the corollary to “Do what you love.” Have you been working hard at something for a long time, yet your long-desired goal still remains out of sight? Are you thinking of giving up? Don’t! Don't do it!

Jane Austen’s first manuscript was returned and rejected by a publisher who apparently didn’t even read it. Undaunted, she wrote two more novels. When she finally sold one of them for the whopping sum of £10, it lay on a shelf unpublished for over a decade. Although Austen seems to have found it difficult to write during the itinerant years following her father’s death, once she and her mother and sister were settled in the quiet and privacy of Chawton Cottage in 1809, she returned to writing with a vengeance. She had to pay out of her own pocket to publish Sense and Sensibility, but she was paid by the publisher for all the books that followed. Jane Austen knew what she wanted, and she never gave up. Neither should we.

4. Give people a second chance

Pride and Prejudice is the quintessential tale of the unreliability of “first impressions” (the original title of the novel.) Elizabeth Bennet thinks Mr. Darcy eminently unlikable, and is drawn to the more overt charms of Mr. Wickham. Over the course of the novel, Elizabeth realizes that her initial perceptions of both gentlemen are completely wrong. The heroine in Emma makes the same discovery when her matchmaking plans go disastrously awry; she, like Elizabeth, thinks too highly of her powers of discernment. Catherine Moreland spends most of Northanger Abbey in a naively deluded state, sensing crimes that don’t exist and believing in people who are eminently untrustworthy. Austen warns us that it takes time to assess a situation, and that we must judge a person’s character not by their words or their looks, but by their actions and deeds — a good reminder for us all.

5. Marry a partner you love and esteem

This seems like a no brainer, right? But it wasn’t necessarily so in Austen’s day, when unmarried women were usually poor and dependent, and looked down on as unproductive members of society. Women like Austen’s Charlotte Lucas in Pride and Prejudice often felt compelled to marry without affection, to have a home and financial security. Jane Austen had strong feelings on the topic, as she expressed in her unfinished work The Watsons: “Poverty is a great evil, but to a woman of education and feeling it ought not, it cannot be the greatest. I would rather be a teacher at a school (and I can think of nothing worse) than marry a man I did not like.” Austen’s novels are peppered with characters who are miserable because they married for the wrong reasons. She insists that we must not only like, but love, respect, and esteem the partner we marry, for only then can we find true happiness.

Jane Austen’s mettle was tested when she received an offer of marriage from Harris Bigg-Wither, a young, wealthy family friend, who she famously accepted only to recant the next morning. At the advanced age of 27, Jane was already considered an old maid. Had she married Harris, she and her family would have been comfortably well-off for life. But she didn’t love him, so she turned him down — a brave decision that changed literary history.

6. Laugh at yourself and view the world with good humor

Jane Austen had a gift for finding the humor in everything. In her novels and her letters, we are treated to a joie de vivre that leaps off the page. While visiting in Kent, she wrote to her sister, “Pray remember me to everybody who does not enquire after me.” Referring to a man who’d been suggested as a possible suitor, Jane joked, “I will marry Mr. Papillon, whatever may be his reluctance or my own.” She lived with vibrancy and found pleasure in small things. Describing “exquisite weather” during a visit to London, she wrote, “I enjoy it all over me, from top to toe, from right to left, longitudinally, perpendicularly, diagonally;—and I cannot but selfishly hope we are to have it last till Christmas.” She could laugh at the minor annoyances of life as well. Referring to a leak in their house at Southampton, Jane wrote, “Could my ideas flow as fast as the rain in the storecloset, it would be charming.” Austen’s novels focus on serious themes, yet she infused them with humor, giving us such amusing characters as Mr. Collins, Mr. Elton, and Mr. Woodhouse. She reminds us that although life may at times be difficult, tedious, or painful, we shouldn’t focus on the bad, or become apathetic or bored. Look for the bright side, Jane is telling us. Remember to laugh.

This is the essential message found in every Austen novel. The turning point of Pride and Prejudice is when Elizabeth Bennet reads Mr. Darcy’s letter and cries, “I, who have prided myself on my discernment! I, who have valued myself on my abilities!…Till this moment I never knew myself.” It is only when Emma recognizes her faults and admits her missteps that she understands the depth of her own affections. Austen’s lesson is clear: learn to distinguish truth from falsehood. Understand your motives. Find your weaknesses. Above all, own up to your mistakes, learn from them, and correct them. Only then can you earn your own happy ending.