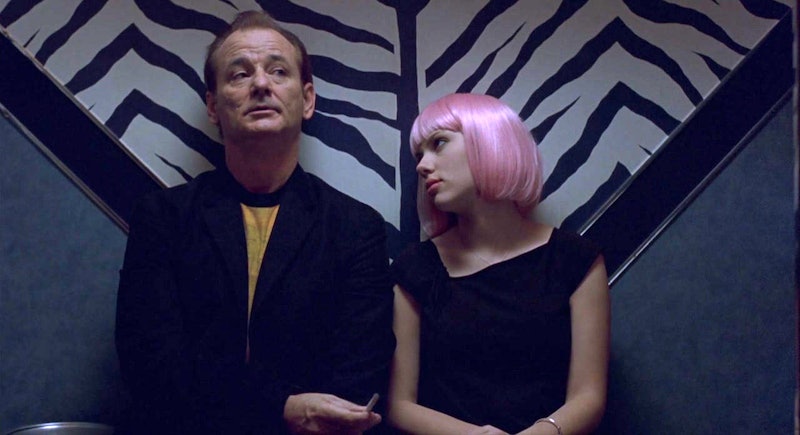 Bill Murray: The man, the myth, the sultry goofball. From his SNL days to his edgy turns courtesy of Wes Anderson, the dude has never disappointed us, which (to jump a bit ahead) is more than most of us can say for our real fathers. For the longest time, I was pretty sure that the feelings I harbored for BMurr (that moniker is happening, go with it) were of the sexy-times-in-my-pants variety. What can I say? When it comes to most celebrities of the opposite sex whom I find compelling, it's all about the fantasy of mutual butt-squeezing. But if that was the case, wouldn't I have been sighing and pining every time ScarJo rested her head on his shoulder, or when Gwyneth Paltrow quietly broke his heart onscreen?

Eventually I realized something. Call it a Murr-piphany (THAT IS ABSOLUTELY HAPPENING) of sorts: I didn't want to get Bill alone in a dark room and talk to him about his "talent" at all. I kind of wanted him to pick me up from the train station for Thanksgiving and tell me all about the new project he was working on in his woodshed. That's right: I want Bill Murray to be my dad, and so should we all.

Look, my dad is the tits. He's awesome. But I doubt even he would argue with me on this front: he's no Bill Murray. The actor's gravitas, goofiness and general down-to-earthiness make for perfect pops material. I feel like if Bill Murray was your dad, no one would mess with you because not only could anyone ever hate Bill Murray's progeny, but no one wants their ass handed to them by Bill Murray. Here are 11 other reasons why we wish Bill Murray was our dad:

If he can look this relaxed with a groundhog at the wheel, we doubt very much that he would scream or start crying the first time we were ensconced in the driver's seat. Admittedly, this was his attempt to try and end his hellish never-ending day, but for a guy about to try to take his own life and that of a rodent's, he seems chill as balls.

2. He Has No Time For Andie MacDowell

Did he star in a movie with her? Yes. Did he seem to enjoy it at the time? No. And he was right to feel this way because Andie MacDowell is the worst. If Bill Murray was your dad you could rest easy knowing that Andie MacDowell would never be welcomed into your home.

3. He Doesn't Care About Table Manners

Bill Murray loves sandwiches. Bill Murray hates table manners. If Bill Murray was your dad, he would never be all like, "Stop rocking in your chair. Try chewing your food. This is not a cafeteria." He would be too busy attempting to detach his own jaw in order to eat his fluffernutter with greater speed.

4. He Is Not Afraid of The Dentist

Bill Murray The Dad would set a great example in terms of getting over minor phobias. Scared of the dentist? Bill Murray would be all, "Don't even worry about it! You'll get grrrrrrreat drugs and then we can just hang out and eat ice cream together!" What a wonderfully mellow and excellent imaginary dad he would be.

One time when I was driving my dad to eye surgery (because he is as old as the hills), he was all, "Becca, we need to go, change out of your pajamas," not understanding that my stylish paisley print pants were, in fact, daytime slacks. Bill Murray would never second guess my fashion choices. He's been rocking Hawaiians shirts since back in the day. Who is he to judge me or my pantjamas?

6. He Could Teach You How to Dance

The day of my first school dance, my greatest concern was that I knew officially none of the moves. I should have been worried about my entirely purple and entirely faux-velvet ensemble, but that is another tale for another time. If Bill Murray had been my dad on that day, he would have been like, "Becca, check out these dope moves," because he knows what's up, dance-wise.

If Bill Murray was your dad, he would cry all the time about everything and you guys would have that in common. Sometimes I cry at dog food commercials where the dog is voiced by a human tenor. It would be nice if my dad, Bill Murray, could sit beside me watching some such commercials, us weeping in tandem.

8. He Believes In Teamwork

If you were too scared to join a sports team, Bill Murray wouldn't give you some lecture about the importance of learning about teamwork. Instead, he would don a uniform and get out there on the field with you. Which would be doubly hilarious if it was something like field hockey. Field hockey, lol.

9. He's a Great Shoulder to Lean On

SORRY, CAN'T HEAR YOU, TOO EMOTIONALLY TOUCHED BY THIS, ONE OF THE SWEETEST MOMENTS EVER TO OCCUR IN AMERICAN CINEMA. If you can watch this and not want to rest your head of Bill Murray's shoulder then I don't want to know you.

10. He Doesn't Take Crap From Anyone

If someone gets into your face, Bill Murray would have no time for it. He'd be like, "I'm a scientist," and even if everyone else was like "No, that is untrue, you are Bill Murray," he'd be all "SCIENCE" and then hurl a smoke-bomb, ending the conversation. In short, it would be the greatest.

11. He Recognizes the Importance of Cats

My dad thinks cats are just okay. Sometimes he forgets that he and my mom own two and will spot one in the house and be like, "What are you doing here?!" and then throw it outside. Bill Murray respects and reveres the power of the pussy. And that's something you really want in a dad.