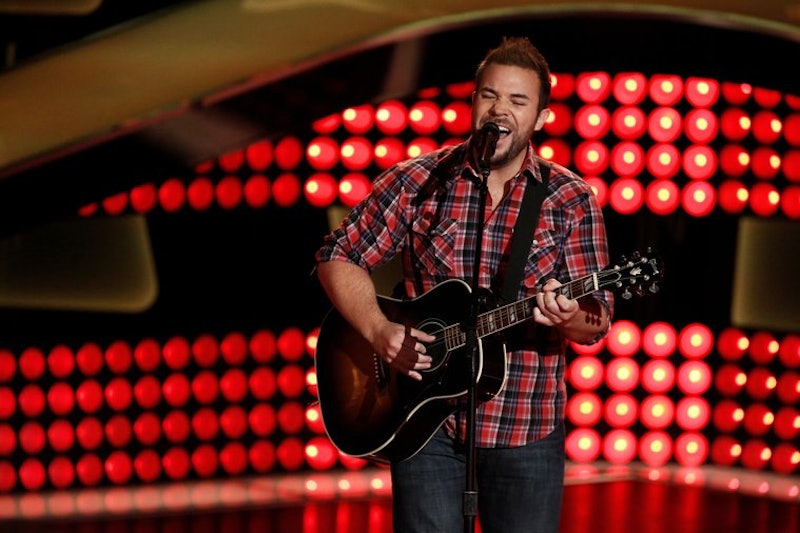 When Team Blake's charming country boy James David Carter took The Voice stage for his blind audition, no one would have thought his dream growing up was to play college football. After a serious injury in high school, James turned to singing as a hobby and I thank my lucky stars every Monday night that he did. A full-time musician for more than 12 years, James is clearly where he's meant to be on Blake’s team — the injury could be a blessing in disguise if The Voice works out for him. This Georgia native is undoubtedly the best country artist the competition has this season and his knockout round rendition of James Taylor’s “You’ve Got a Friend” will more-than-likely advance him into the live rounds.

Blake admitted that James’ performance of “Nobody Knows” during the blinds was arguably the best country audition he’s heard during his three years as a Voice coach, and that is because it was nearly flawless. The cry in his voice is irrefutable and is the most classic sound you can have as a country artist. Country, like many genres, has turned pop fairly quickly over the last couple years, and for country fans, that’s just not what you want to hear. James’ voice is unquestionably unique, but more importantly, that classic-rock kind of country voice that is so rare that when it’s found it needs to be heard.

James was a quick four-chair turn and truthfully would have done well with any of the coaches. In fact, if you recall, James was the artist who inspired Adam and Gwen to try and find the highest possible point on their chairs — almost killing themselves in the process. Instead, he became the epitome of The Voice cliché going with Blake, but it was without a doubt the right way to go. Blake and James are a good match because they know both classic and current country music, which will come in handy when his votes start coming from their ability to pick the right songs.

His only setback going into knockouts could be going up against Griffin, who Blake stole from Pharrell during the battles. Griffin has grown in leaps and bounds since his own blind audition, and I’m guessing his version Justin Bieber’s “As Long As You Love Me” will only show more improvement. Regardless, Blake would be smart to stick with James because if he doesn’t, James will be an easy steal and Blake will surely regret losing him later on when America consistently votes him on top. It was unfortunate that his path with sports was ended when his knee snapped, but it gave him the opportunity he needed to realize his songwriting talents and he’s ready to show us what he’s got.

More like this
Everything To Know About Taylor Swift’s 10th Studio Album, 'Midnights'
By Grace Wehniainen and Jake Viswanath
Taylor Swift Wants To Direct A Movie Next — But You Might Have To Wait
By Radhika Menon
Jason Derulo Is Launching A New Singing Show In The UK
By Maxine Harrison
18 Years After 'American' Idol, Jennifer Hudson & Simon Cowell Reunited On Her Talk Show
By Radhika Menon
Get Even More From Bustle — Sign Up For The Newsletter