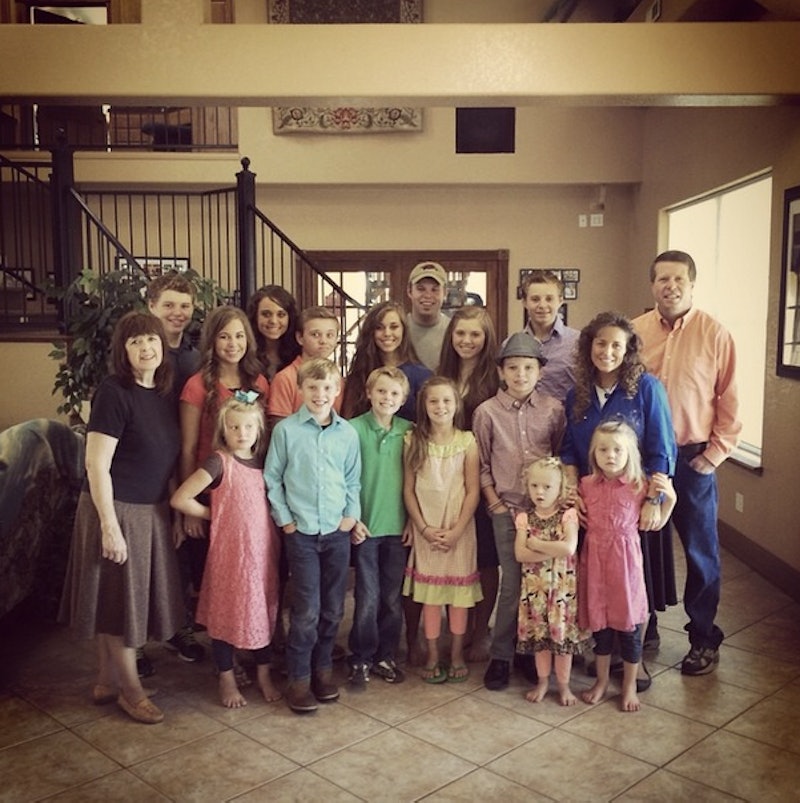 The 19 Kids and Counting crew are always coming up with ways to surprise the audience. And even though we already knew that the Duggar family is incredibly religious, and that many of their strictest family rules — including their hair and dress code — stem from their Christian beliefs, there's one more thing they don't agree with: dancing. And why don't the Duggars dance? Jim Bob and Michelle decided that they weren't comfortable with dancing because it "promotes sensuality" and is too intimate for Christian Patriarchs like themselves, who don't even let their male children look at women in bathing suits at the beach because the "temptation" is too great.

The Duggars have a very uncommon version of body negativity. They're afraid of anyone seeing a human body, noticing their bodies, or making certain decisions with their body, like having an abortion (all 21 of the Duggars have been stumping for the pro-life cause ad nauseam when the cameras aren't rolling). And because they live in constant paranoia of experiencing complicated, tempting feelings (i.e. anything sexual), they avoid intimate contact with people who don't have the same code of conduct that they do. This isn't to say that the Duggars should be forced to dance. No, plenty of people don't like dancing, especially publicly, if it's not their strong suit. But the way Jim Bob describes it, saying that the family doesn't want to "shake body parts around," just makes it sound as though they judge one another for being less than perfect, and even when not dancing it's hard not to move in an awkward, jiggly way every once in a while. Dancing like a total dweeb is fun!

The Duggars do, however, like some music. They just find that most modern music promotes too much sex, drugs, and, uh, rock n' roll to fit with their values. The family finds these themes a "bad influence" on young (and adult) minds. All 19 kids play an instrument, and the family enjoys playing, singing, and listening to gospel, country, or bluegrass arrangements.

For most of us, just like there's a big difference between front-hugging and having sex, there's a difference between listening to pop music and going all out with some R-rated twerking like it's 2013 again. But the Duggars don't like temptations, and have devoted their entire lifestyle to being as modest as possible. So it makes sense that they see the dark and dangerous path set forth by listening to Justin Bieber… OK, they're not missing out on too much there. But some part of me hopes that even if they're not down to go the full "Anaconda," they get some small way to express themselves physically. Even if it's, like, jumping jacks.