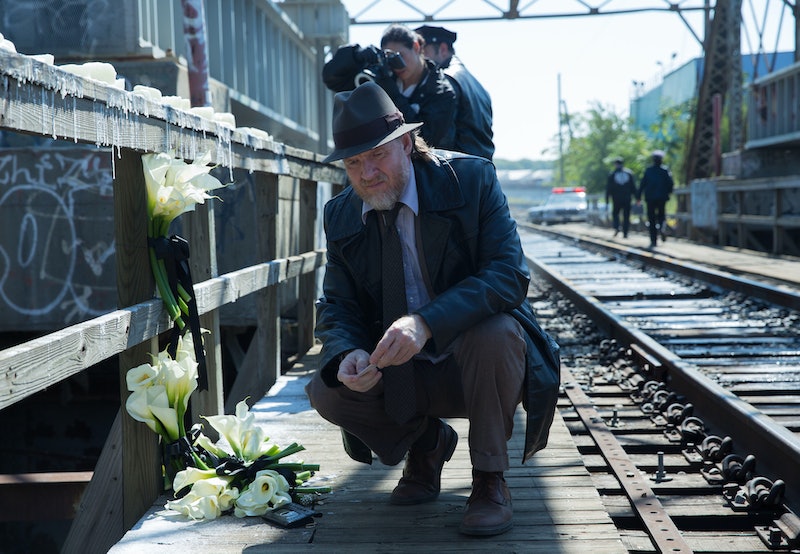 Well, that certainly wasn't what I was expecting. On Monday's episode of Gotham , we were introduced to a villain known as the Spirit of the Goat. The seemingly supernatural killer was targeting the firstborn children of all of Gotham's wealthiest families and he seemed to be a particular nemesis of Harvey Bullock, who faced him down not once but twice. The idea of a copycat killer was quickly dispelled by the fact that the second Goat had knowledge of the details of the original crime spree that had never been released publicly. So who was the Goat on Gotham ? It turns out that the culprit was the wealthy Hastings family's therapist, Dr. Marks. And she's only part of the problem.

Raymond Earl, the current Goat at the time of the episode, was actually the second criminal to don the mask. Years prior, Bullock and then-partner Detective Dix had faced down another man behind the Goat mask, one that had been shot and killed during the apprehension. It turns out that both the first and second Spirits of the Goat were patients of a woman known as Dr. Marks, whose therapy often included hypnotism. However, when Bullock confronts her at the end of the episode, she reveals that hypnotism can't actually force people to do things they don't already want to do. And everyone in Gotham wants the wealthy elite taken down.

Penguin warned that there would be blood in the streets and it appears that Gotham is going to ridiculous lengths to prove exactly how true that is. Dr. Marks has no comic book counterpart because she is, at least at this point, more of a symbol than a villain. She represents the intense class warfare that has bred the corruption and danger present on the streets of Gotham. With so many police officers in the back pockets of mobsters, the rich getting richer while the poor continue to suffer, and everyone willing to look the other way about anything for the right price, having someone like Dr. Marks around to push that sense of injustice and resentment to a murderous end is dangerous.

Bullock shot Dr. Marks in the leg when she attempted to escape, but is this the last we'll ever see of the hypnotist? Probably. As far as we know, Susan Misner, who played Dr. Marks, was only slated for one episode. Plus, we don't really need to see her pull the same trick a second time. She illuminated for the audience the dark lesson that Jim Gordon has been learning since he first set foot in Gotham. Things are so dire that ordinary people are taking law and order, or revenge and retribution, into their own hands for better or for worse. (On Gotham, it's usually for worse.)

As ridiculous as the idea of a Gotham boogeyman called The Spirit of the Goat is, the larger problem that the Goat symbolizes is incredibly serious. And, as we know from the Batman comics, it's only going to go downhill from here until the city needs a costumed vigilante to bring anything that might even vaguely resemble order back to Gotham's streets.