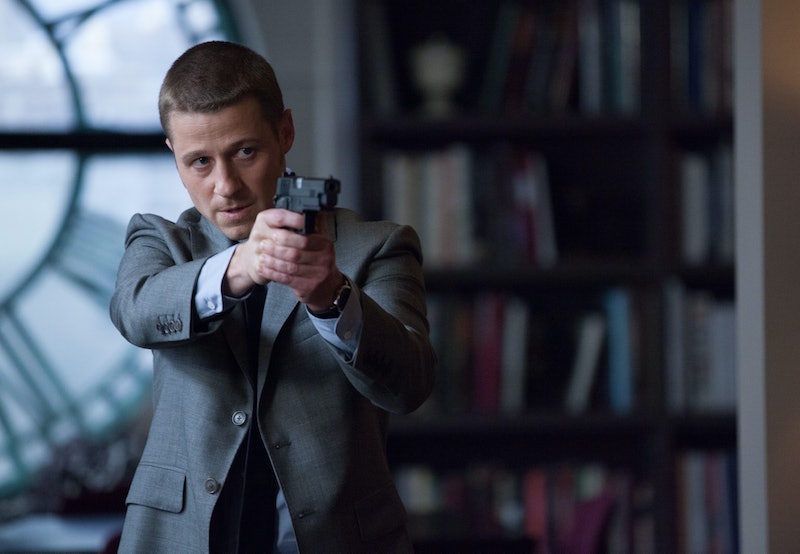 THANKS A LOT, PENGUIN. Is it just me, or does Oswald Cobblepot really know how to ruin people's lives? When Jim Gordon decided to spare Penguin's life after being asked to kill him to prove his loyalty to the corrupt Gotham City Police Department, we all knew from the Batman comics that this would turn out to be a huge mistake. As early as the next episode, Penguin was ignoring all common sense and rationality to make his way back to Gotham despite the fact that everyone wanted him dead except Gordon — who wanted him to pretend to be dead. On Monday's episode of Gotham, Penguin finally revealed that he's alive to the entire GCPD just as Gordon was about to be jailed for his murder and that single action will probably get them both killed.

I want to believe that Penguin had good intentions in completely screwing Gordon over. As he told his mother earlier in the episode, Gordon was basically his only friend and definitely the only good-hearted person left in Gotham. The fact that he told his mother this while she was creepily helping him take a bath didn't make it any less true. I really should have known better than to ignore the creepiness of a scene that, in hindsight, was total foreshadowing for why Gordon and Penguin aren't friends in the comic series. You know, ignoring all the murder and stuff.

Renee Montoya and Crispus Allen tracked down an eyewitness to the shooting on the docks whose testimony was enough for them to get a warrant for Gordon's arrest. When he was brought into the GCPD in handcuffs, he tried to admit to Bullock and to the rest of the room that he hadn't actually killed Cobblepot. And, sweetly enough, Bullock totally backed him up even and especially when he too was arrested for being an accomplice to the crime. However, all of that good will built up over the last few episodes abruptly came to a halt when those doors opened and Penguin hobbled his way in with a wide smile and the declaration, "I am Oswald Cobblepot."

Bullock almost launched himself at Gordon in a rage, which was right when the episode cut out. So what does Penguin's very public return mean for him and Gordon? According to the promo for the next episode, nothing good. Everyone wants Penguin's head on a platter now that they know that he still has it and Gordon is right back to being public enemy number one now that he's been revealed to not be as "with the program" as they thought. I have a feeling that Gordon is about to find out exactly how many cops are in Falcone's back pocket now, probably when they all start holding guns to his head. Even worse, Falcone and Fish Mooney appear to send an assassin after Gordon to take him out once and for all, because they have no use for a cop who won't work with them.

Of course, we know that Penguin and Gordon both survive Gotham because they go on to appear in the Batman comics, but there are a lot worse fates than death. They both have people that they care about and those people could meet an untimely end or face fates worse than death themselves. The only thing for certain at this point is that life is about to become very, very difficult for Gordon in the next few episodes. So, again, THANKS A LOT PENGUIN.