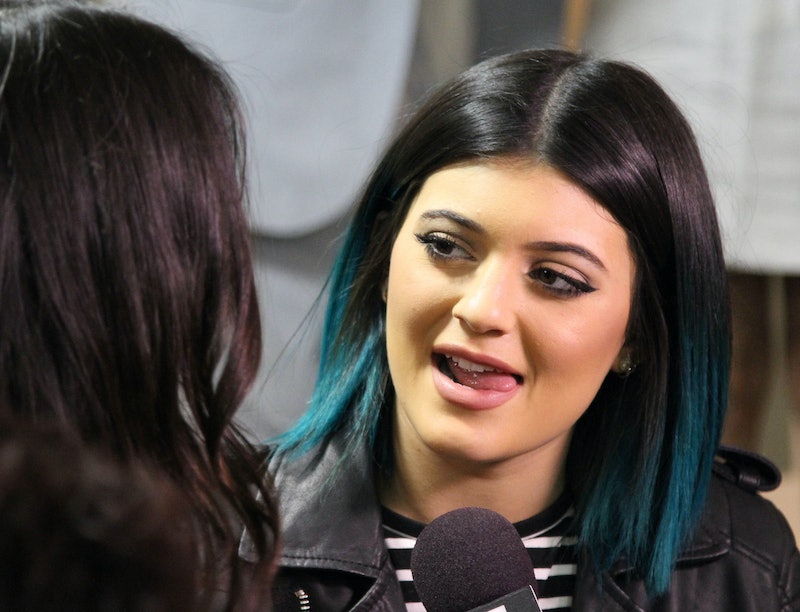 Kylie Jenner is at the center of a beauty controversy. The seemingly increasing poutiness of Kylie Jenner's lips has been a hot topic in gossip media since the size of her lips appeared to have built up in a few Instagram snaps. The satellite Kardashian, who is just 17, posts plenty of selfies to her IG and in them Jenner's lips have seemed larger than in previous self portraits, accompanied by the instant speculation that she has had some work done. That's most likely a ridiculous notion, since she isn't even 18. Granted, at first, it doesn't look like the work of some industrial strength lip liner, prestige lipsticks, or even heavy photo editing. But maybe it is, and it's really not our business to speculate.

Even so, Miss Jenner, the youngest fruit of Kris Jenner's womb whose look is easy to copy this Halloween, has responded to all the discussion and drama. She's bored by it, honestly, and for that, I say, "Bravo, bravo."

Jenner tweeted that she is pretty much yawning over the media's obsesh with her lips, even issuing a goading tweet asking the media to find something more interesting to talk about, suggesting that it's the media's job to entertain her. It's a sassy response, and it's unexpected.

Most starlets might immediately formulate a publicist-edited statement, even in tweet form, or react to defend themselves, like, you know, Renee Zellweger did when photos of her looking nothing like herself were last week's unnecessary buzz topic. Jenner's response is indicative of a media savvy. She is the one dictating the discussion with her posts, because even though she is a teenager, she is a celeb who is well aware that her every move is trolled. She didn't get all defensive nor did the lady protest too much. She is already moving on.

Jenner's responsorial tweets were simply the digital equivalent of rolling her eyes. Jenner is teaching us an important lesson. She's a normal teenager who isn't overly interested in the chatter of adults and she not losing sleep over the fact that the media is in an uproar over her pucker.

So what if she wants to show off inflated lips? She's a kid. She's having fun. It's highly doubtful she went under the knife already.

The pic above shows Jenner with some seriously huge lips. But in the photo below, where she and big sis Khloe are blowing kisses, Jenner's lips look pretty normal to me.

Overall, it's refreshing since Jenner didn't have to say anything. She just keeps posting photos that show off her pretty pout. You go, Kylie.