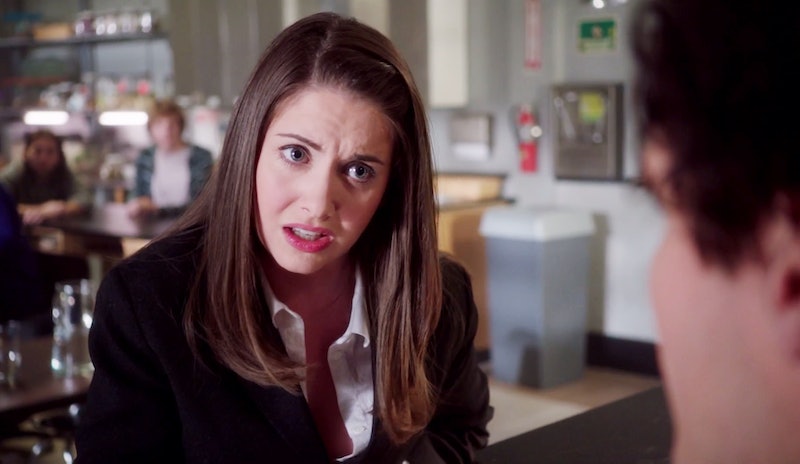 I don't really date. It's not like a "thing"; I'm not out on some crusade to be single. It just happens that I'm not dating, and I'm not especially going out of my way to change that. Only now, when I sit down to count it out, so I realize that I've been single for three years – because I've never once questioned myself about it. I've had bigger priorities, and in retrospect, looking back at all the weird places my life has taken me in the past few years, I can't imagine the strain of trying to keep something up with someone without limiting my options. I have worked hard for the things I've wanted to make of myself, and being able to make snap decisions that I knew wouldn't drastically affect another person has been crucial to every little success.

And as archaic as this sounds, I can't date people I don't see myself marrying. It's not even a choice. I'm just simply not attracted to people I don't see a future with, and right now I'm at a place in my life where I'm not ready to commit to anyone anyway. I had one serious relationship in college, and broke it off when it started to look like we were going to change our plans to be near each other after graduation. It seemed stupid to limit ourselves when we were so young. And if that wasn't enough to sway me to stop dating for awhile, I handled it really immaturely. Like crazy texts from your ex immaturely, and I consider myself a very sane and rational human being. It was a sign, to me, that maybe I wanted to give myself a little more time to grow up before putting myself in that position again.

So yeah, even though every now and then I'll dip a toe into the dating pool, I'm not a fan of forcing things. I don't ever see myself dating online or using a dating app, not that there's anything bad about doing that. If it happens, it happens, and if it doesn't, well – honestly, I'd rather be alone my whole life than be with someone I wasn't in love with. But I notice that as comfortable as I am with that, there are some people who aren't. This can be both hilarious and exhausting, especially when they make their opinions known:

This confounds me. If I'm talking to you already, then by the very definition of lonely, I am not. It's not like people who are single are on some magical island in a glass bubble where they have no contact with friends and family. I'm a proactive person; if there was some major hole in my life, I would fill it. If I felt lonely, I would make changes to not feel lonely. You asking that question implies that you think I would just let myself exist in a miserable state, which makes it offensive on a lot of levels.

"You Should Meet My Friend So-and-So."

I know this kind of thing is always said with good intentions, but that doesn't make it any less annoying. There is something so inorganic and weird about being set up with somebody. I know it sometimes works for other people, but when you're already disinterested in dating in the first place, it usually leads to an awkward encounter and an awkward goodbye where you feel like a total jerk for not wanting to go out again. No thanks.

Damn straight, I am. I've been in love before and I'm not going to settle for anything less than that. You know that feeling when it happens, and it's so much better than dating someone for convenience.

"Everyone's Starting To Settle Down."

What sound logic! It totally makes sense for me to buckle under societal pressure and do what everybody around me is doing at the expense of my happiness. Really, I could not be happier for my friends who have found the person they belong with. But I've never felt like I was on the outside looking in. Maybe because I have friends that are so awesome that I've never felt like a third wheel, but also because I don't mind taking my time. Everything doesn't have to happen for me in the next five years, or even the next fifteen. Life will take me wherever it decides.

"You Should Just Get To Know Them Better."

A lesson I've learned in the murky field of dating in my twenties: if you're not attracted to someone on the first date, you are probably not going to change your mind. Ever. For both of your sakes, just drop it before it gets messy.

"What Happened To You?"

There is this weird assumption that people who don't date have been "burned" before in relationships, and while that may be true for some people, it isn't true for all of us non-daters. Most people I've dated have been phenomenal. If anything, that's one more reason not to throw myself into the dating pool: I want to make sure whoever I do eventually date, should I decide to, is as nice as people I've dated in the past. And besides, for those non-daters who have been burned, I'm pretty sure the last thing they want is to share it with everyone who asks.

"You Must Be A Total Prude."

Ah, nothing like the sweet smell of someone making rude, unfounded assumptions about your sex life.

"Maybe You Should Join A Running Club/Gym/Cooking Class To Meet People."

If I join a club or take up a new hobby, I'm going to do it for me, and only me. Having some sort of weird dating agenda would just suck all the fun out of it. If I happen to meet someone there, then it will be a lucky coincidence, not because I sat through the world's most boring book club to make eyes at someone.

I'm sorry about your great-aunt who never settled down and never had kids and regretted it. But this is the 21st century, darling. I don't need a man to do any of the things I want out of life, having kids included. I mean, it would be nice. But let me emphasize: Totally. Not. Necessary.

"Don't worry, the right one will come along soon."

This is a sweet thought, so I can't really be mad at anyone who says this, but the thing is, I'm not worried. I think we all have plenty of people in the world that we would be happy with. My life isn't going to be somehow less worthwhile if I don't find one of them.

The Quiet Assumption That There Is Something Wrong With You

I've gotten this my whole life. A guy I went on a date once in high school called me the "Ice Bitch" when I declined to kiss him on the first date (he kissed me anyway, so let me take this opportunity to say eight years after the fact: you're a tool, sir). I'm aware that all this keeping to myself is not necessarily typical of people my age, especially when I have no religious reasons or personal beliefs stopping me from dating.

But I am also confident in my ability to love and be loved, and I don't feel the need to prove it by rushing into a relationship I'm not sure about. These three years I spent single have changed me so much already. When I meet someone I want to spend the rest of my life with, I want to already be the person I set out to be, or at least have a much clearer vision of how to get there, and I have no desire in wasting my time or other people's time along the way.