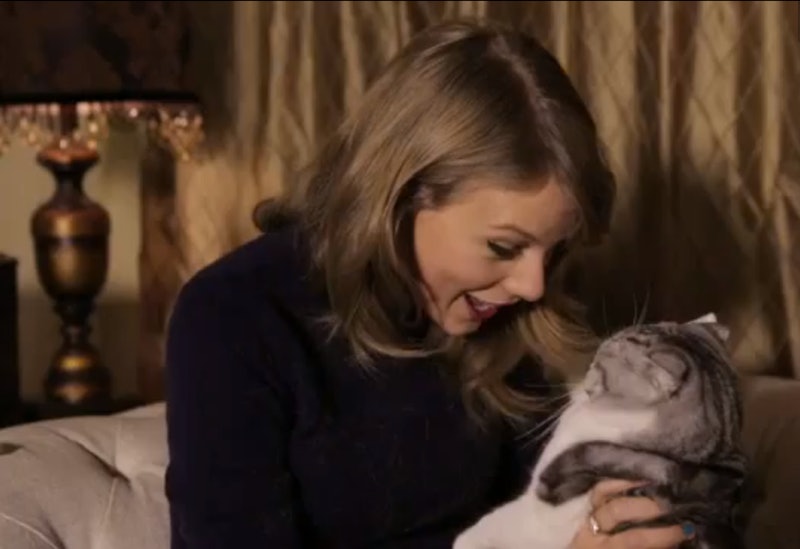 Even though Taylor Swift loves to write about her famous exes— especially Jake Gyllenhaal on Red and Harry Styles on the newly-released 1989 — all her songs aren't about romantic relationships. Let me throw a theory at you: What if half the time, Swift is really just writing about her cats, Meredith and Olivia? I'm not here to say that she's in love-love with her feline friends, but she clearly adores them and they're a huge part of her life. Plus, she can have the same problems with her furballs that she has with guys. What if she wants to cuddle 'em and they're just not feeling it? What about when she's on the road and misses her cats, thinking about what they're doing back in NY or LA? And how do they feel when they just want to go on a stroll with her outside and the paparazzi won't stop snapping their pictures? It all lines up. (At least in my crazy mind.)

I've excluded any songs that are clearly about a guy, but ones that don't mention gender or specific snowmobiling accidents are all fair game. And if a lyric says "chasing their tails," it's 100 percent about her kitty cats.

Since this album was written during the time that Swift got Meredith, I'd like to think that she didn't know her cat was about to come into her life, but it was fate. And now life will never be the same.

Lyrics: "These are the hands of fate / You're my Achilles heel / This is the golden age of something good and right and real / And I never saw you coming / And I'll never be the same."

Swift loves to carry Olivia around the big city, and they always get photographed leaving their apartment. Clearly, this is an ode to finding a place to hide together. And though Olivia has blue eyes, the lyric "in the dead of night, your eyes so green" could be about Meredith's big green eyes (not Harry Styles').

Meredith probably doesn't want to hang out and cuddle with Swift all the time, but I'm sure she apologizes. Can you imagine Mer just sitting at the door, her big eyes asking for forgiveness?

Lyrics: “You find yourself at my door / Just like all those times before / You wear your best apology / But I was there to watch you leave / And all the times I let you in / Just for you to go again / Disappear when you come back / Everything is better.”

"All You Had to Do Was Stay"

Meredith is known to be moody (as seen in the video above), so this one could be about her not wanting to be with Swift. Apparently "The Last Time" didn't stick, because clearly Swift forgives her cats easily.

This track off of Red could be about Swift imagining Meredith at home (remember, at this time, she didn't have Olivia yet) waiting for her to return. She's wondering when her mom will be home. Swift wants to FaceTime her or just go home, but she can't.

Lyrics: “I bet this time of night you're still up / I bet you're tired from a long hard week / I bet you're sitting in your chair by the window looking out at the city / And I bet sometimes you wonder about me / And I just wanna tell you / It takes everything in me not to call you / And I wish I could run to you / And I hope you know that every time I don't / I almost do."

C'mon. This girl loves her cats. Nothing wrong with writing a song about it. Plus, since this doesn't have any super-intense Harry Styles references, I'm voting it's about Mer and Olivia.

No rhyme or reason for this one, except I bet Swift dances with her cats every night.