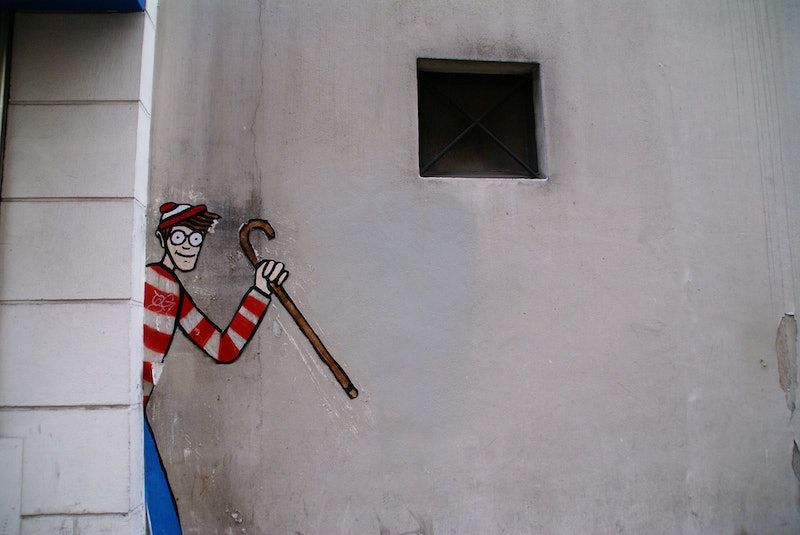 As kids, Where’s Waldo books kept us busy for hours, searching for that elusive, bespectacled traveler until we were crosseyed. If you were anything like me, you were only concerned with finding Waldo before your older brother did. But it was easy to be distracted by all the accident-prone people committing Steve Urkel-style destruction around him. Amid all the spear-chucking and chaos of the overcrowded Bosch-esque scenes, Waldo walks through mostly unnoticed, somehow unscathed, and always with the same, oblivious smile. And like Bosch and Bruegel, Waldo illustrations often tend to be gruesome displays of human folly.

Much of the mayhem Waldo managed to avoid ended up in the checklist at the end of the book as extras for “Waldo followers” to find. And if we’d taken a minute to notice the carnage — monks throwing other monks off cliffs, a guy getting boiled in a cauldron, some people lying facedown on the ground, most likely dead — we might have actually been terrified.

Admittedly, there are a few fun but mean-spirited gems in the bunch — like Spanish conquistadores getting shat on by an overhead bird. But when you come across a group of people weeping over a homeless violinist’s song, you breathe a nice refreshing gust of humanity. There might be a whole lot of Icarus-falling-from-the-sky-and-drowning misfortune, but the ones that foster those warm, fuzzy feelings are the ones that deserve the most un-jaded attention.

So the next time you happen upon one of these classic books, skip the Waldo search and the headache that comes with it, and take in some of the calamity:

These pacifistic Vikings decide to play in the sand when they’re supposed to be pillaging. Just like Hermey wasn’t really feeling the whole toy-making-elf thing, maybe pulling people out of their thatch huts by their hair isn’t their scene. They’re on the clock, and their supervisor is not happy about it.

A writer-friend of mine has always said that puns are “lazy writing,” but he never said anything about drawings. A “jelly” fish, a sea “lion,” and a sailor with a “compass.” Get it? So punny! I’m slapping my leg right now.

Comedian and “executive transvestite” Eddie Izzard says that if women can wear pants, men can wear dresses. It’s hard to disagree with that logic. Plus, the long yellow gloves are very complementary. Don’t worry about those other guys, my man. You be you.

Alien and human children coexist peacefully in a domed jungle gym in outer space. As long as there is no intent of colonization, experimentation, or imperialistic genocide, this is rather heartwarming.

Just because the good witch and the bad witch are feuding doesn’t mean their cats can’t get along. We all know the cats will do what they want, anyway. And if anyone disapproves, prepare for some spiteful vomiting.

THE EXECUTIONERS WHO JUST WANT TO PARTY

These fun-loving gimps look like they’re quite enjoying the macabre social atmosphere and industrial music at a nightclub called The Dungeon. If you'd seen and done the things these guys have, you'd be looking to unwind a little, too. And something tells me, in those masks, they haven't had to pay for a drink all night.

We all know the pyramids were actually built as ornate tombs. But turning one of these wonders into the Ultimate Slip’N Slide? These guys thought of everything.

These kids on the right are the super fun garden-variety new age types you’ll see Kumbayah-ing by their pup tents at Bonnaroo, and there’s just something about this smiling, carefree dude on the left that is just making my day.

Most of us don’t know our neighbors past the polite smiles and head nods we throw at them when we bump into them on trash day. But these guys toasting each other with their bizarre elixirs are exhibiting some very satisfying neighborly love. Who knows; they could be star-cross’d lovers about to chug poison in a seriously romantic suicide pact. O true apothecary!

They are having a grand time and taking the “Eat, drink, and be merry” advice to another level. Might as well get the best out of that plague, mon frères.

THIS GUY WHO UNDERSTANDS THE IMPORTANCE OF LEG DAY

Yeah, your upper body isn’t as cut as your friend’s, and yeah, you’re pretty oddly proportioned compared to that finely-muscled specimen on the end, but damn it, you deserve some credit. Most gym-goers are bored with lunges and step-ups, but not you. You didn’t skip leg day, and that counts for something.

For those of us who do get sunburned, and have for every year we have been alive, this is a fantastic image of awareness. It was our fault for not reapplying after we swam in the ocean, and we shouldn’t have worn that weird cross-strap bikini when we can’t reach our back, but it’s important that we wear our absent-mindedness out in the open as a cautionary tale to those around us. And the “We the Sunburned” solidarity here tells the fair-skinned, You are not alone.

This old lady is taking this town by storm. Grandma is getting her ride on, getting in touch with her wild side. She just got ink on her right bicep, a screeching tire with a banner that says “Born 2 Ride.” And she’s not afraid to rev her engine and freewheel all over town. During daylight hours only.

THIS LADY MIXING IT UP AT A STUFFY PARTY

This rollicking feminist is throwing etiquette to the wind, baring her bloomers and fishnets to slide down the bannister at Napoleon III’s house party. What fun! To hell with convention! On behalf of tomboys everywhere, I salute you.