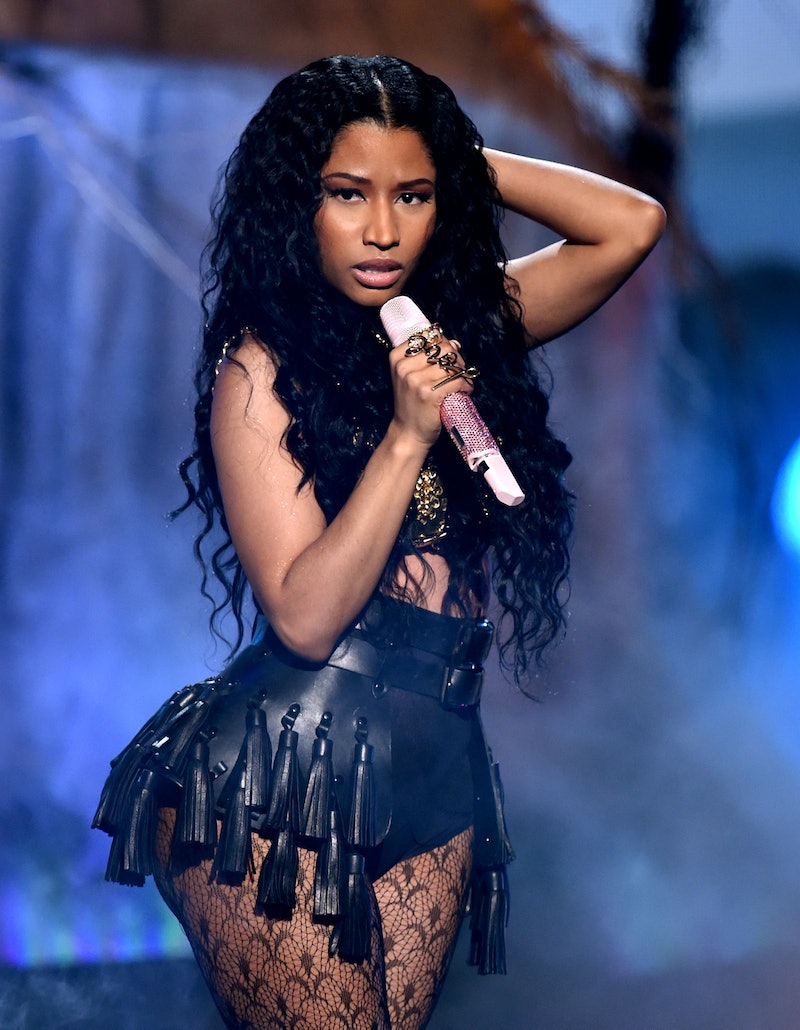 I've been worshipping at the altar of Nicki Minaj recently (I like to put Spotify on Private Session so I can listen to "Anaconda" umpteenth times without anyone noticing) so today is a big day for me. On Tuesday, Nicki dropped a track titled "Only" that features Lil Wayne, Drake and Chris Brown, the album art of which she teased over the weekend. AND IT'S SO GOOD. Obviously not as great as "Anaconda," but is anything? "Only" softens the blow that the release of The Pinkprint has been pushed back all the way to December 14 from its previous slated date of November 24, too. I suppose it's not that much longer to wait, and I'm crossing all my fingers and toes that she'll blast us with another incredible music video a la "Anaconda's".

But anyway, "ONLY." It's a lot slower and harder and less dancey than "Anaconda," but it's still incredible. Like I said, I might (definitely) be biased because I think Nicki is a queen. So here I am to dissect for you the greatness that is "Only," which I think old people would literally have a heart attack over. Another reason it's bomb.

Bustle's Kadeen Griffiths finds the "Only" verses to be pretty sexist, and I get that. But I think she and I concede on a point: that was probably the whole point. Nicki Minaj is one of the most self-aware artists in the game right now, and a champion of women being able to express their sexuality. Griffiths eventually comes to the conclusion that Nicki's "sexist" lyrics were probably a parodical response to all the rumors that the Young Money label is one big incest fest; Nicki says outright in the beginning of the track "I never f**ked Drake, I never f**cked Wayne."

People love to talk about what the relationship is between Nicki and Drake, and the extremely explicit lyrics on this track, honestly, in all likelihood will not put those rumors to rest. Nicki has such a great sense of humor that I think this is just her "talk all you want" response to all the jibber jabber.

I have Googled quite a few times in the past few weeks, "Where is Lil Wayne?" Gone are the days when Weezy guested on just about every track out there. He's been quiet for some time. It's SO good to hear that wheezy Weezy voice on a song with Nicki Minaj. Bless.

People Come Together for Onika

Am I happy that Chris Brown is on this track? To be honest, nah. It still disappoints me that Nicki runs with him especially because she is such a feminist, but I do have to stay that it's hella impressive that both Drake and Chris Brown came together for this track, considering their ever ongoing feud. I am also very pleased that Chris Brown is not in the cover art.

My Anaconda Don't Want None of Those Double Standards

All the early talk about "Only" is certainly focussed on one thing: just how raunchy the lyrics are. OK, yes, "Only" is NSFW or children, but I don't think the track is any dirtier than... well, a Lil Wayne song (a man who once rhymed yeast infection with geese erection). It's right along the lines of Nicki's continual pointing to the double standards both between male and female artists, as well as the disparity in what is acceptable sexuality (in response to the overwhelming cries of "too lewd" to her Anaconda cover, Minaj did a series of Instagram posts showing white women in similar poses that didn't elicit the same incensed reaction). Just another reason she's the queen: She's always going to call you on your crap.