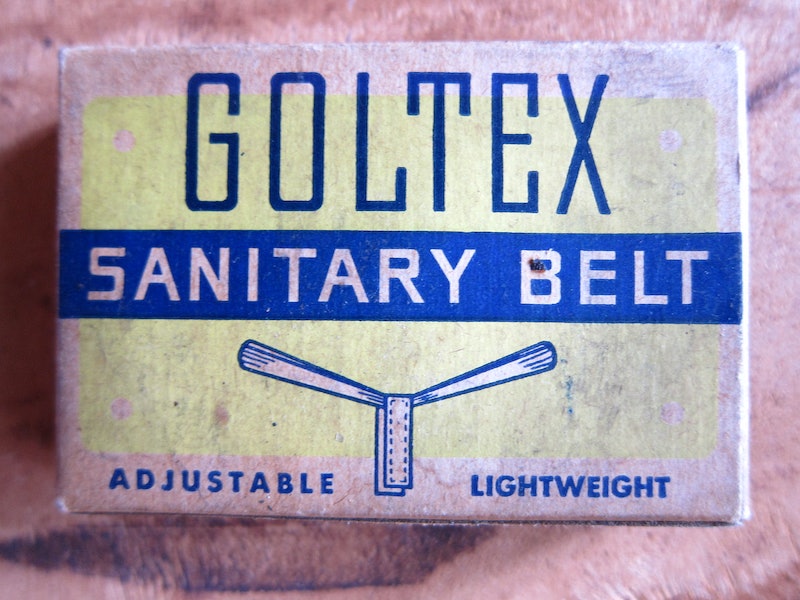 I, like countless preteen sensations before and after me, learned many of the hard facts about puberty, periods, and breast enlargement exercises from Judy Blume's Are You There, God? It's Me, Margaret. And I, like many many other young women since the book's 1970 publication, was completely befuddled by the book's reference to the "sanitary belt" that Margaret uses when she finally gets her period. I knew about tampons, pads, and the other terrifying accoutrements I would be expected to deal with in my own rapidly approaching menstrual career — but what was a sanitary belt?

An actual elastic belt used to hold pads in place before the invention of self-adhesive maxi pads, sanitary belts went the way of the dinosaur almost immediately after Margaret went to press — adhesive maxi pads were invented in the 1970s, and within a decade of publication, Margaret's struggle with her sanitary belt made as much sense to readers as that part in Little House in the Big Woods where they played with a pig bladder. Blume herself led the charge to modernize the book, infamously revising Margaret 's "sanitary belt" passages in the 1990s so that modern readers would not be mystified — and, okay, more than a little scared. Belts?! Pins?! Who wants any of those things near their precious ladyflower?!

And yet, 20 years into my own menstruating career, I still often wondered about sanitary belts. Though they sound ancient — like something that would have fallen out of favor around the advent of the horseless carriage — sanitary belts were pretty much the only option for young, newly menstruating women up through the early '70s. Though tampons have existed since the 19th century, and Tampax has been selling modern applicator tampons since 1936, younger women — as you may remember from Margaret (and possibly your own life) — were discouraged from using them because it was thought to be sexually improper. Which left women of the first half of the twentieth century to wrangle with belts.

My own mother got her period in the early '60s, but I never heard a word about belts from her or her friends while I was growing up. A cursory Internet search found that most online talk about the belts was older women remembering how awful they were — women on a Yahoo! Answers thread devoted to memories of sanitary belts described them as "form of torture," writing "I always felt like somebody had pinned a tail on me." Similarly, women on the website MomsView recalled of the sanitary belt era: "The pads with belts felt like a giant wedgie ... You couldn't wear tight jeans because the outline of the belt would show."

Of course, because this is the Internet, there are also even a few sites devoted to sanitary belt-based sexual kinks. But for the most part, the sanitary belt seems like a memory most of its former users are rather glad to have in the rearview mirror.

And yet, in our era of seemingly infinite menstrual options — I personally have a Diva Cup, regular tampons, O.B. tampons, and "overnight" pads under my bathroom sink right now — I wondered if anyone was still using a sanitary belt. I had friends who used washable pads, and I myself usually jammed a clear rubber cup into my bleeding ladybusiness. Was it so out there to imagine that maybe some people were still using sanitary belts by choice?

I found that sanitary belts are still in use in medical settings — mostly for women who have just given birth and are still experiencing postpartum bleeding— and updated versions of the sanitary belt are sold by some environmentally-conscious websites. But if you want to wear a genuine "Teenage Softie" like poor old Margaret Simon, you best get yourself to Ebay, where vintage sanitary belts are sold as collector's items. I looked through the belts, and before I knew it, I was bidding. As a women's history fanatic and a lover of young adult kitsch, I had spent decades wondering what the hell these things were, and how they worked. Was there ever going to be a better time than now to find out?

Getting a belt was easy enough, but getting the pads was harder. For those of you wondering about the physical properties of the belt: it's basically just an elastic loop that goes around your hips, with small clips dangling in the front and back. You have to get special pads to fit these clips, with loops that either hook onto the clips, or ones that you secure with safety pins. I did finally track down some of the pads that fit the belt — though I had to order them from Thailand, where menstrual product company Sanita still manufactures them. You put on the belt, then attach the pad, then put on your underpants and actual pants. My belt looked like this when it arrived, which will probably give you very little insight into how it's actually worn:

Yup, it looked like nothing so much as those elastic headbands that people wore in the late '90s. If I had had any doubts before, I was now sure that this was going to be a real adventure in womanhood.

The belt arrived, then the pads, then my period — and then, it was showtime.

Some of the problems that seemed to occur almost immediately must have had to do with my lack of training — with no Mrs. Simon to instruct me in proper protocol, I didn't notice when one of the straps holding the clips had become twisted until it twisted the pad upside down inside my underpants. But just walking around also presented problems — since it was attached to my body, rather than my underpants, the pad rubbed all over my ladybits, roaming through my underwear like a curious puppy, chafing my labia one moment, giving me a wedgie the next.

From the very second I strapped the belt on, sex seemed immediately out of the question. I felt notably unsexy with a large wad of cotton doing parkour in my pants. The free-style movements of the pad had also left my underpants dotted with blood, which made me feel even less in the mood. I didn't remember getting this much blood on my underpants since I was Margaret's age, and had tried to hide my brand-new period from my mother by improvising pads out of bunched-up toilet paper.

Not only did I feel frumpy in the belt, but I could not bear the thought of getting naked around my boyfriend while wearing it. In fact, I went to bed in extra thick leggings every night I wore it, just to try to shield his eyes.

Granted, I've never been an enthusiastic participant in period sex — I don't like messes, my vulva gets too sensitive, blah blah blah. But as I spent yet another night trying to hide my bulky, strappy pad from a boyfriend who definitely would not have cared about seeing it, I wondered how much of the frumpiness I felt when on my period had to do with the still-lingering cultural baggage of the sanitary belt and other older menstrual products. I know that taboos against period sex have existed in nearly every culture on earth for all of recorded history — but among many women I know, that idea of ritual uncleanliness seems to have been replaced by the idea of ritual unsexiness.

In the early days of American commercial maxi pad manufacturing, "discreetness" was the lynchpin of every pad's marketing campaign — in 1928, the Modess pad company even went as far as issuing "silent purchase coupons" for pads that a woman could hand over to her pharmacist, so that she would not have to experience the embarrassment of speaking (even tangentially) about her period. There was nothing shameful about the way that these clean and efficient pads functioned — but the marketing campaigns spoke to a deep shame that had been instilled in women, not only by centuries of cultural teachings about menstrual blood's "dirtiness," but by previous menstrual products, like sea sponges, reusable rag pads, and other items that were often messy or hard to clean.

Similarly, the "unsexiness" I felt using a menstrual belt seemed to have little to do with modern tampons and maxi pads, which are not only invisible under clothes, but have never deterred a single sexual partner in my life. Instead, my feeling seemed to be tied to cultural baggage from an earlier time that I had picked up from my mother and other older women in my life — women raised in an era when the idea of feeling sexy while wearing a sanitary belt was laughable.

By my third day with the belt, any novelty had worn off, and I was merely horrified at the entire situation, and at myself for doing this. Even though I had taken on the belt project as a goof, part of me had thought that I might learn something enlightening. So many blogs I had read over the past decade had sung the praises of the old-fashioned feminine fashions and pastimes — canning your own preserves, making your own washable menstrual pads, braiding your own hideous rag rug instead of buying a much nicer one from Ikea — that part of me thought there might be some positive lesson that I could learn from the belt. Maybe something about being more in touch with our bodies had been lost in the hurry to only have your period four times a year and whatnot.

But as I neared the end of my five days with the sanitary belt, I had learned only to be grateful for progress — and more aware of the weight of history in how we view our menstruating selves. As a teenager, I'd always been confused by tampon ads that emphasized how you could swim or ride a bike while wearing them. Of course, I'd think — why on earth wouldn't you be able to? But those ads weren't speaking to me — they were speaking to the women raised before me, who certainly couldn't swim or ride a bike or feel very sexy in these belts. Even though the belts were long gone by the '90s, the cultural memory of what a menstruating woman couldn't do in them lingered.

In fifty years, we'll probably have period products so convenient and effective, they'll make today's tampons look as absurd as sanitary belts look to us now. But I wonder if we'll have shaken off the baggage of all the menstrual products that came before. My period with the sanitary belt taught me that no bleeding woman is an island — we're affected by all the ideas and taboos about periods that came before us.

As I took off the belt, for once in my life, I felt grateful for my modern menstrual tools. Like the women in those puzzling tampon commercials from my youth, I could finally ride a bike. And as I cast my sanitary belt into the welcoming grasp of my garbage can, I wondered about the future of my bleeding self. With unlimited tampons and Midol at my disposal, were my periods really as much of an unsexy pain the ass as I had always assumed? Or had I just absorbed a message that they were?

More like this
Megan Rapinoe's Relaxation Hack Is Super Dreamy
By Carolyn Steber
This Psychological Effect Might Be Keeping You From Hitting Your Goals
By Lexi Inks
How To Politely Reject Someone Who Keeps Asking You Out
By Laken Howard and Lexi Inks
Bustle Newsletter: September 27, 2022
By Stephanie Talmadge
Get Even More From Bustle — Sign Up For The Newsletter