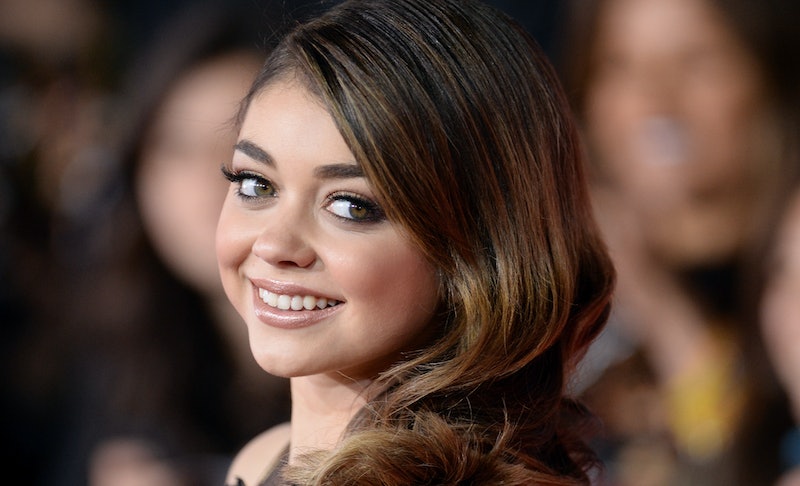 Sarah Hyland is a young actress who has already experienced one of the most demoralizing and damaging abuses that a woman can endure: abuse by her partner. Last month, it was reported that Sarah Hyland was subjected to a heinous attack by her then-boyfriend, Matthew Prokop, who choked her, pushed her around and repeatedly threatened her life. This was, allegedly, not the first time this happened, only the first time he was caught, and it was reported that Prokop had subjected her to physical and verbal abuse through most of their four year relationship. Almost immediately following the nightmarish ordeal, Hyland was granted a much needed restraining order against Prokop, which ordered him in to be at least 100 yards away from her at all times. This must be such an incredibly difficult moment for such a young woman to handle in the spotlight, and I must say, Hyland is coming through this like a champ.

During a recent interview with Meredith Vieira on her daytime talk show, the host shared her past of being in an abusive relationship in her twenties, and asked Hyland, "When you face adversity, how have you come through it?" And although she didn't name any names, Hyland showed great power in simply quoting two of her favorite writers, Dylan Thomas and Robert Frost, and turning them into her personal manifesto:

There are two quotes that I want to say. One is a Dylan Thomas poem: "Do not go gentle into that good night. Rage, rage against the dying of the light," which is one of my favorite poems. It just strikes a chord in me; and also Robert Frost: "The only way out is through."

In the last month, Hyland has focused on her achievements, notably her work on Modern Family and spreading awareness for pet adoption with ASCPA, one of her other passions. I admire that she's managed to focus on her jobs at hand, not let the entire world in, other than through her favorite quotes, on an experience that could take a very long time to heal, and show other women, both older or younger, that they too can fight against that which is meant to tear them down. She added,

People have to go through things in order to become the person they are today, and that's that.

And that's all she needs to say.

More like this
How To Stream 'She Said' In The UK
By Maxine Harrison
Casey Anthony’s Father Said He Was “Ready To Forgive Her” Before She Renewed Allegations
By Brad Witter
Steve Banerjee's Wife Irene Sold The Chippendales Brand Prior To Her Death
By Brad Witter
Where Is John Leonard Now After Suing Pepsi For A Harrier Jet?
By Brad Witter
Get Even More From Bustle — Sign Up For The Newsletter