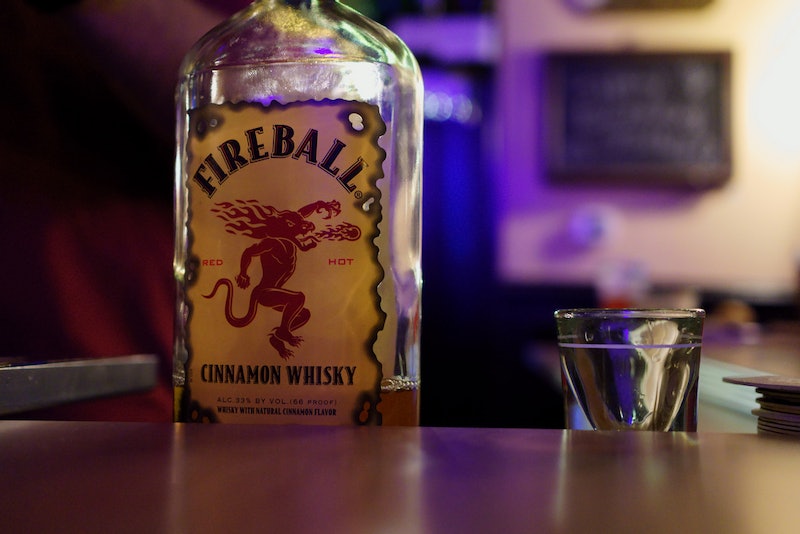 Listen up, whiskey drinkers in general and cinnamon whiskey fans in particular — this very important announcement definitely concerns you guys. Fireball whiskey has been recalled in Finland, Sweden, and Norway. The cause of the withdrawal has been cited as “excessive levels of propylene glycol.” If you are a scientific layperson like myself, then the words “propylene” and “glycol” mean pretty much nothing to you on their own, let alone put together. But guess what? It’s a type of antifreeze. Not the type that goes in your car, but an antifreeze nonetheless.

According to Tech Times, propylene glycol is often used as a mild sweetener, as well as in “a number of different polymers, vaporizers, and e-cigarettes as a preservative." It’s regularly used in food processing, although Europe limits its usage considerably more than the U.S. does. It’s considered generally safe to consume, but when ingested in higher amounts, it can sometimes cause allergic reactions. Via the Agency for Toxic Substances and Disease Registry, it's a "synthetic liquid substance that absorbs water" and is "used by the chemical, food, and pharmaceutical industries as an antifreeze when leakage might lead to contact with food." It can also be used as "a solvent for food colors and flavors, and in the paint and plastics industries." Furthermore, it's often used to create artificial smoke in theatrical productions. So again, not the kind of antifreeze you put in your car — that's ethylene glycol — but I still don't feel terribly good ingesting something that's used for ... well, all that.

Here’s the part that I find the most alarming: The bottles of Fireball that are being recalled have been withdrawn because they’re the North American formula, which “does not meet the requirements of the European Union’s tighter regulations concerning recommended levels of propylene glycol.” Which means that the recalled bottles are just the ones that are normally sold in the U.S. So those “excessive levels of propylene glycol"? They're regulation levels here. Furthermore, a spokeswoman for the company told The Daily Beast via email, “It appears that we shipped our North American formula to Europe and found that one ingredient is out of compliance with European regulations. Finland, Sweden, and Norway have asked to recall those specific batches, which is what we are doing.” So, y'know ... do with that what you will.

I have never been gladder in my entire life that I don’t have a Fireball habit. Although you know who I am concerned about? The people at that wedding whose whiskey cam video went viral yesterday. I don’t know where they’re located, but the GoPro camera was attached to a bottle of Fireball. Guys? That wedding looked like it was a blast, but I hope you're all OK.

To sum up, here’s the TL;DR version:

Honestly, who needs Fireball when you can make tequila donuts? (And for more videos on Bustle, subscribe to our YouTube page.)

Editor's Note: The original version of this article stated that Fireball contained antifreeze, not clarifying that it is not the type of antifreeze that goes in an automobile. The governmental Agency for Toxic Substances and Disease Registry does classify propylene glycol as a type of antifreeze, one often used as a sweetener and preservative.

More like this
25 Quotes About Love To Share During Pride Month 2022
By Madeleine Aggeler and Emma Garza
How To See The Lunar Eclipse On May 15-16, 2022
By Kaitlyn Wylde
Heinz Is Selling A Sprayable Mayo Mousse
By Maxine Harrison
TikTok's Favorite Bartender Thinks Mimosas & Bloody Marys Are Out For Brunch
By Alexis Morillo
Get Even More From Bustle — Sign Up For The Newsletter