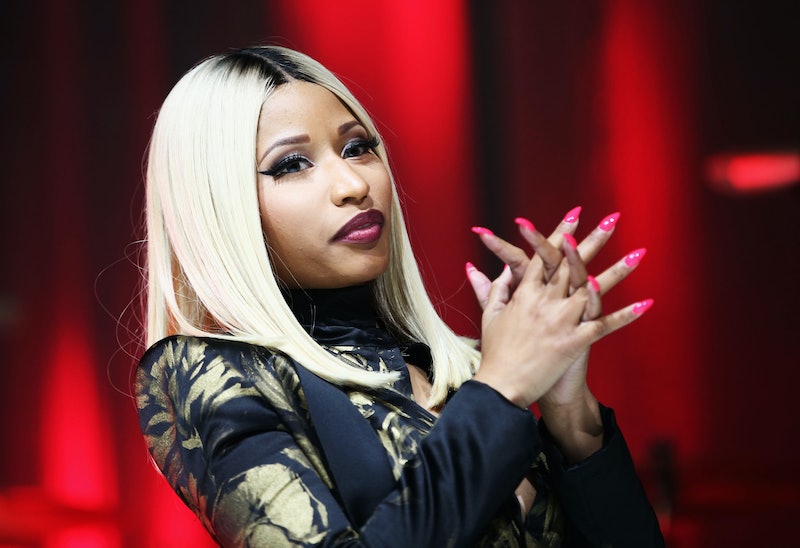 Bad news Barbz: the release date for Nicki Minaj's new album, The Pinkprin t , has been pushed back to Dec. 15. In September, Minaj announced on Twitter that her much-anticipated third studio album would be arriving on Nov. 24, but now, for reasons unknown, fans will have to wait just a little bit longer to hear it. Minaj is a busy woman — when she's not releasing her own material, she keeps her name out there by featuring on other artists' tracks. Generally speaking, she does a fantastic job of giving her fan base new material to listen to, so on the surface, this small delay doesn't really seem like a big deal. Besides, at this point, fans have been waiting for a full-length follow-up to 2012's Pink Friday: Roman Reloaded for over two years, so really, what's another three weeks?

Here's my one major concern: A Dec. 15 release date means that Minaj is going to miss out on Black Friday sales and a large chunk of the holiday shopping season. According to The New York Times, album sales in the United States are down 14 percent in comparison to last year. When you look at it that way, delaying the album, even if it's only by a few weeks, is kind of a puzzling decision.

So, why was The Pinkprint pushed back? There must've been a good reason. Here are three possible explanations:

Now, I realize that if The Pinkprint isn't complete, three weeks doesn't give Minaj much time to put on the finishing touches. However, if the album is mostly complete and the track list just needs a little tweaking, three weeks could be the perfect amount of time. After all, last-minute track list changes are fairly common in the music world.

The repackage of Iggy Azalea's debut album, Reclassified , is due out on Nov. 24. It's possible that Minaj didn't want to share the spotlight with a fellow rapper who she's (allegedly) had beef with in the past. Maybe Minaj wanted the day of her album release to be all about her. Maybe she wanted to make sure that she would dominate the conversation.

Nicki Wants a No. 1 Debut

Minaj's two previous albums, Pink Friday and Pink Friday: Roman Reloaded, both debuted at No. 1 on the Billboard 200 album chart when they were released back in 2010 and 2012, respectively. If Minaj had stuck with the Nov. 24 release date for The Pinkprint, not only would she have had to compete with Azalea for the No. 1 spot, but also Eminem, Rick Ross, and R.E.M. (not to mention Christmas albums and other recent releases that could see a holiday surge, like Taylor Swift's 1989, for example). If earning a third consecutive No. 1 album is important to Minaj and her team (and I suspect that it is), pushing back the release date for The Pinkprint may have been a wise choice, even if it might mean fewer sales at first.