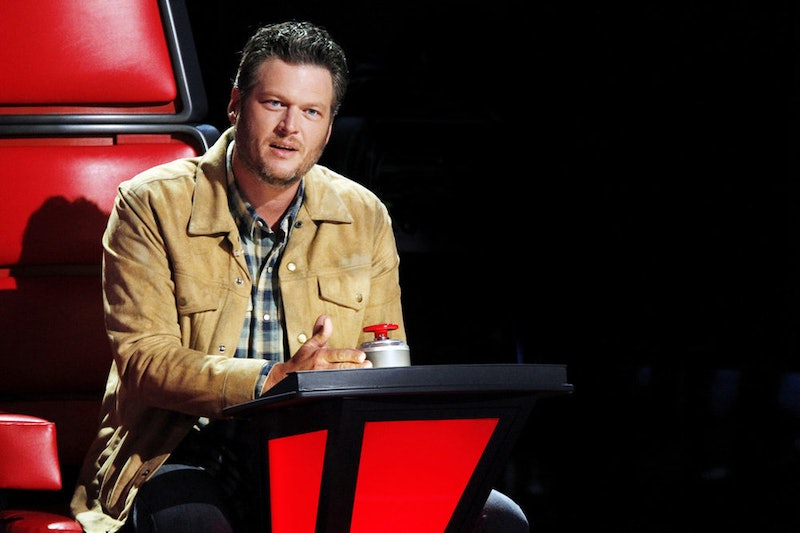 Well, it appears that the competition has finally begun on The Voice Season 7. And, unlike fellow judge Gwen Stefani, Blake Shelton isn't getting overzealous with his button. On Tuesday night, Blake refused to use his steal on Troy Ritchie and Alessandra Castronovo during The Voice knockout rounds and for good reason. Both Team Gwen contestant Troy, who sang Outkast's "Hey Ya," and Team Adam contestant Alessandra, who sang Emeli Sandé's "Next To Me," weren't ready to take their talents any further in this competition. And Team Blake has absolutely no time for that right now.

I appreciate a judge that's perfectly honest with their intentions — the glitz and glamour of Team Gwen's complimentary t-shirts is great and all, but Blake Shelton's straight-up desire to win is awesome. Even if, sometimes, it seems like he's more interested in winning than creating a star. That only happens sometimes, though. And on Tuesday night, Blake made his intentions for Team Blake as clear as ever when he passed on guitar-slinging Troy Ritchie following his performance.

Here's the thing, Troy was actually pretty good vocal-wise and he took this song and made it into something entirely his own. But the big downside to this contestant was the fact that he was all over the damn place — even Gwen had to reel him in and convince him to start out simple and slow for his knockout performance before he could really go off and do his "crazy performance." Sure, Troy demonstrated that's he's capable of taking guidance and being molded by his mentors, but he was still just all over the damn place. And, considering Team Blake is a pretty stacked situation already, full of performers that are already in control and ready to take Blake to The Voice finals, he just had no time to play babysitter for Troy Ritchie's uncontrollable energy.

But I was almost certain Blake would hit his button and rescue powerhouse singer Alessandra Castronovo from the chopping block. I mean, she might not have had as much control of her voice as necessary and the New Jersey native still suffered from some stage fright, but that voice was fire. Well, Blake has no time for that either, apparently. I mean, I noticed during Alessandra's time in rehearsals with Adam and Taylor Swift that she wasn't really feeling the constructive criticism they were giving her — especially when Taylor suggested that she make her voice a little rougher to set herself apart from Sandé. And, again, Blake is trying to win this thing, there's really no time to struggle to get through to an artist that, as much as she says she wants to learn, refuses to take criticism and work with it.

So, what does Blake's refusal to steal during this week's rounds of knockouts mean for Team Blake? Probably that he's at the top of the pack when it comes to preparation for The Voice final rounds. I just hope he doesn't miss out on some great performers by being too frugal with his button. He already lost Taylor Phelan during Monday night's knockouts. Team Blake is great, but the perfect steal could make it a shoo-in for a win on The Voice Season 7.