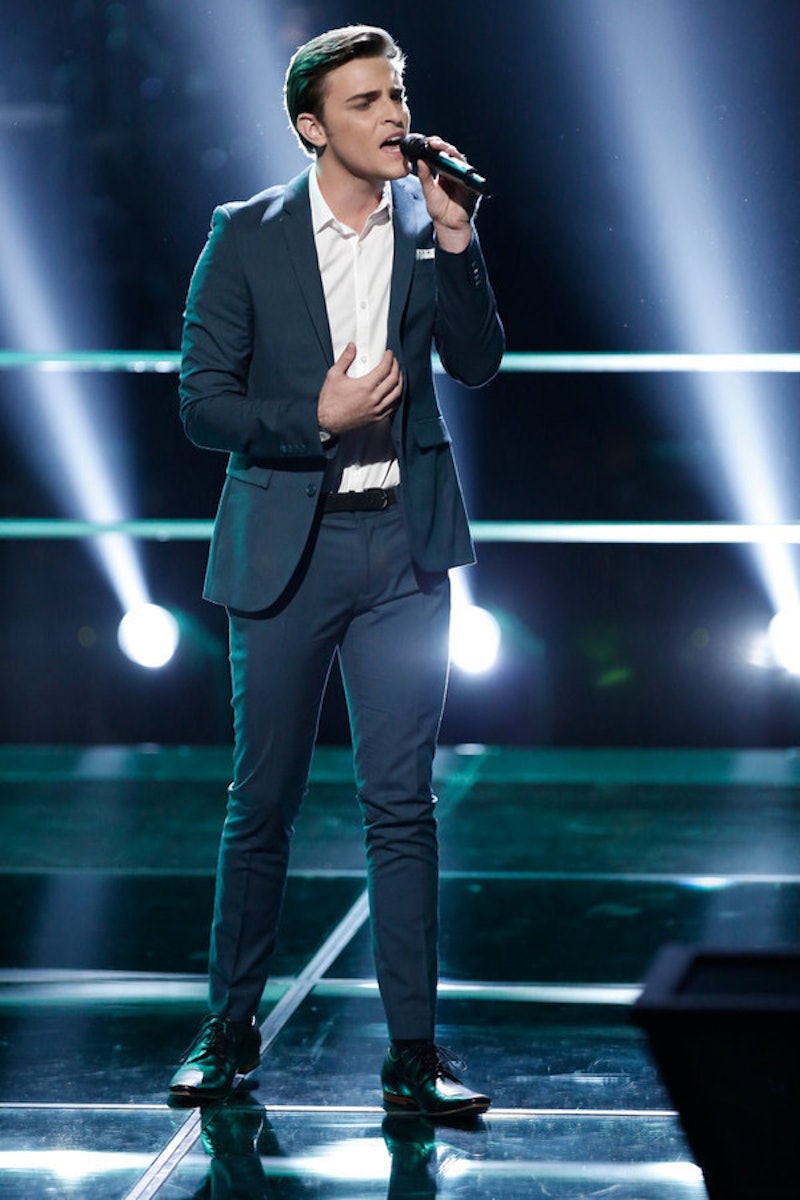 Big mistake, Pharrell. HUGE. I don't think I've been more shocked so far on The Voice Season 7 than I was during Elyjuh Rene and Ricky Manning's knockout round on Tuesday night. Sure, all of the knockout rounds have led to difficult decisions for all of our judges — but Pharrell's decision between Elyjuh and Ricky was easy. During Monday night's knockout round, Pharrell lost Taylor Phelan to Team Adam and he's probably pretty upset about it now. And on Tuesday night, Pharrell chose Elyjuh Rene over Ricky Manning during the knockouts for reasons that are still unknown to man. Ricky shut the damn place down with Miley Cyrus' "Wrecking Ball" while Elyjuh's performance was just "meh" and yet Pharrell still let Ricky go. Thankfully, however, Gwen Stefani stole him because, clearly, Pharrell can preach about stars twinkling, but he can't coach them.

Honestly, I don't even know what I can say about this situation, other than maybe Pharrell's hat was cutting off the circulation to his brain and he chose Elyjuh by accident. Because it just makes absolutely no sense. Pharrell and guest advisor Taylor Swift told Ricky exactly what he needed to — all of that "stars don't stand still, they twinkle" nonsense — and he delivered, tenfold. While Elyjuh just didn't. Pharrell and Taylor told Elyjuh that he needed to connect to the lyrics of Chris Brown's "With You" after he revealed that he only picked the song because it was easy for him and that was exactly what he DIDN'T do. Pharrell and the rest of the judges had the same complaints that he had during rehearsals about Elyjuh's performance and yet, he chose him anyway. Ricky was "a star" and got let go and Elyjuh "needs work" but he got to stay on Team Pharrell? That makes zero sense.

Thankfully, however, Gwen jumped on the opportunity to steal Ricky and take him under her wing, where he'll undoubtably have his talents better appreciated. Ricky killed this song and proved that he's got the talent, the receptiveness, and the control over his abilities to win The Voice. And when he returns later in the season to whoop some Team Pharrell ass, Pharrell's going to realize how wrong he was to let him go.

Watch Ricky Manning's flawless knockout round performance here and prepare to be fully infuriated that Pharrell almost sent him home: