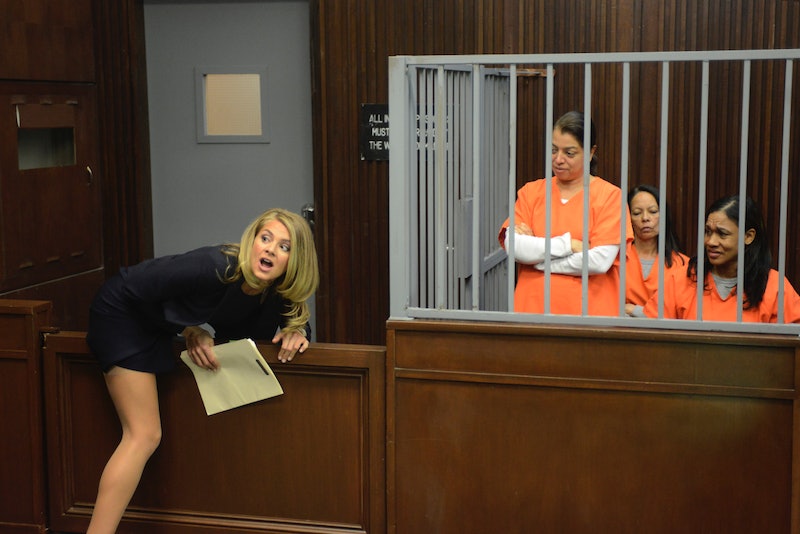 When the heck are women going to figure out how to hold down a job and keep a relationship going? As far as sitcoms seem to be concerned, it’s always either one or the other. This tired premise is dusted off for USA’s new sitcom Benched, in which star Eliza Coupe revives the Type A nutter-butter shtick she delivered so well back in that wondrous magic hour that was Happy Endings. This time, she has no Brad of whom to speak, as the workaholic corporate attorney Coupe is illustrated to be so devoted to her job that she fouled up her engagement.

We meet Coupe’s Nina steeped in tears, finding out for the first time that her beloved ex-fiancé is newly engaged, this time to a woman whose priorities seem to be right on the money. It isn’t until midway through the episode, however, that we first meet this one-who-got-away face to face: he, too, is a lawyer, and one with an impressive county title to boot. Yet this Trent is never asked to shoulder the blame of a shattered relationship, never castigated for his incapability to keep both halves of his life operating up to 11, never shamed for his priorities or in any way deemed a responsible party for the breakup that ensued nine mines prior to the events of the pilot.

Granted, Trent is painted to be somewhat of a jag, and is set up as an antagonist to Nina as she tests the waters of trial law. But the pilot seems uninterested in looking at Trent in the same light that it does Nina, in wondering how a man with the same professional demands might have been so much more capable of keeping a healthy relationship running on the side… to a point, that is. After all, he had a working fiancée to deal with — cut the guy some slack.

Benched approaches the premise with a good nature and some sharp humor, but can’t quite crawl out from under the rock of backwards tradition that rests steadily on its head throughout. When we watch Nina cop to her romantic shortcomings, we’re effectively launched back in time two or three decades, confused and put off by just how casually the show seems to be addressing Nina’s chauvinistic frame.

In fact, the problem is less a malevolence in Benched than it is a nonchalance. The show doesn’t think twice about what it’s saying when it pronounces Nina utterly incapable of “having it all.” Its presentation of her professional equals as slick, strong-jawed men without a hiccup to be witnessed is second nature. Its explanation for any other woman taking corporate partnership over Nina (without seeming to be quite the social dysfunction that she represents) is perverse: Nina lambasts her colleague Debbie (It’s Always Sunny’s Maureen Ponderosa), who lands the aforementioned title despite not having thrown away an engagement as far as we can tell, for only getting the job due to the staff’s particular fondness for her body. That, as Benched seems to think, is the only way a woman can succeed in business without throwing her whole life away.

So when are we going to tire of this old routine? I’m pretty sure Aly McBeal did all that needed to be done with this one.