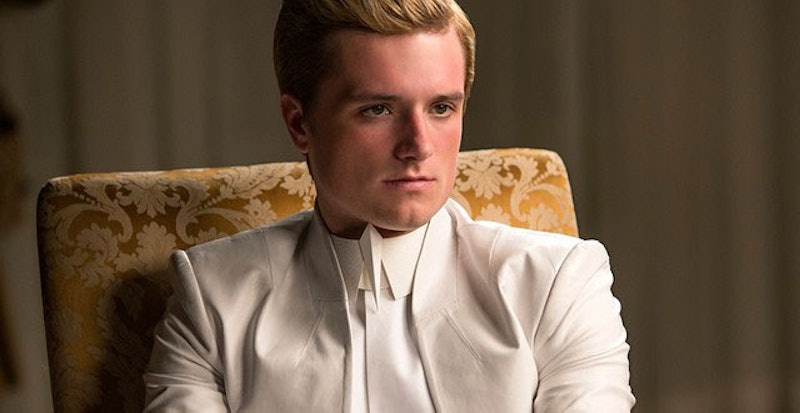 Look, I know the final book in The Hunger Games series has its sad moments. But hearing Josh Hutcherson talk about Mockingjay Part 2 really highlights just how depressing it's going to be. In Us Weekly's new Hunger Games special issue, the actor behind Peeta gave us a hint of what to look forward to in Part 2. Unfortunately, it's more like he gave us something to dread. Don't get me wrong, I can't wait to see the movies because they're going to be epic. But at the same time, I can't deal with how sad hijacked Peeta and the war in general are going to be.

The magazine isn't on stands yet, but thanks to helpful Hunger Games fan jenlawrnce on Instagram, we have a sneak peek of the section about the second film. "It's really dark, really intense," Hutcherson told the magazine. OK, I can live with that. I mean, all of the films and books are dark and intense since children are being forced to kill each other. But then he spilled on where Peeta and Katniss stand for much of Part 2, and it's not good. "He has lost his mind and hates [Katniss] now," Hutcherson revealed.

Cue sobbing. I knew it was coming, and yet, I'm still not prepared. I'm Team Peeta all the way, but I know he's going to be hard to champion when [spoiler] I have to watch him attempt to kill the former love of his life.

As if things couldn't get any worse for Katniss, director Francis Lawrence also hinted at her breakdown in the painful final film. "We get into the streets of the Capitol, which has become her arena," he said. Notice how he said her arena, not the arena? Basically it means poor Katniss is all alone in her terror even when surrounded by her team of soldiers. To most this is a war, but to Katniss, this is her third trip to the Hunger Games arena and that's horrifying. In Us Weekly Francis Lawrence acknowledged the effect this has on her. "She's very, very fragile and very, very angry," he said.

Add to that Us Weekly's intro line of "Bloody battles, broken hearts, fatal confrontations: This is the end" and I'm an official wreck.

The first Mockingjay film hasn't even been released and I'm already dreading the second. I know it all ends up (semi) OK, but does it have to get so sad first? Curse you, Suzanne Collins, for writing such a dynamic and heart-wrenching series. I'm not ready for these emotions.